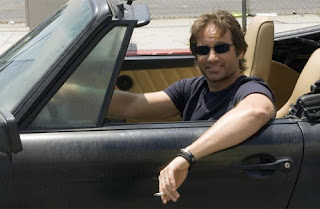 Look at that face. How can you say no to it? Most women can't. Maybe that's his problem.  For those of you who don't recognize him, that is Hank Moody, author, bad boy and all around sexy guy - the foundation upon which Californication is built, the sexy comedy on Showtime now in its fourth season.

Hank Moody is the ultimate badboy. He does what he wants when he wants to whom he wants. He's a perpetual Peter Pan who's never grown up and doesn't plan to. Why should he, when his extended childhood is just too much fun? He's never even held an actual job in his life, as he admitted in this week's episode - he's never had a boss, his admission rather blowing his attorney's mind.  Oh, if you haven't seen this week's episode, then possible spoilers ahead.

Let's show him in action now: 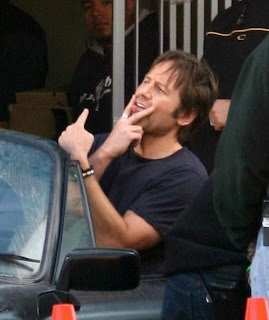 He's irreverent, irresponsible, and wickedly funny.  Sexy as all get out too.  I think he must have a clause in his contract (David Duchovny, that is, the actual actor that plays the character) that he gets a partial nude scene in every episode.  Not that I'm complaining, mind you, it works for me. This week was with her attorney. We got to meet her boss this week, and he insisted on taking Hank to the golf course. Watching Hank in a yellow golf shirt was priceless - and what he did on that course will have you rolling and wiping your eyes. (Not giving everything away, don't worry). 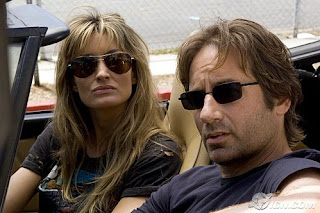 But even the biggest bad boy has to face the consequences of his actions. Life can't be too easy for them, and Hank is no exception. If  you've been following the show from the beginning, you know that he hooked up with a girl at one of his book signings, took her to bed, and while they were fucking, she punched him - twice. Imagine his surprise to later find out she was only sixteen.  She did seem a lot older and she never said a word. Not only that but her dad was, at the time, engaged to Hank's ex.  Damn touchy situation. Naturally he didn't confess to what happened, but perhaps he should have, cause the truth has a way of coming out, and the longer delayed it is in that coming, the uglier it gets. But before it does, Hank polishes his dormant writing skills and actually pens a novel - a thinly veiled autobiographical novel of the cathartic type about what happened, which he titles Fucking and Punching. The young lady in question, whose name is Mia and is played by Madeline Zima (who also appears in the last season of Heroes as Clare's roommate), spots the manuscript and steals it, and then has the temerity to find an agent (Hank's agent Charlie Runkle's ex-assistant, but that's a whole other story there) and have it published under her name, to great literary acclaim. Shit happens and the truth does come out, but with a price - Hank, who has reconnected with his lady love, loses her and his daughter too.  And oh, he gets arrested for statutory.

Other actions bring other consequences. His relationship with his daughter Becca is an emotional rollercoaster. Becca is a damned emo Goth girl who looks like she could happily hang out with Lydia Dietz of Beetlejuice. At times she is more mature than her father, but at other times I just want to punch her, especially for that doom and gloom attitude of hers. Negativity breeds negativity, sweetie! Just saying!  Hank's ex, Karen, is actually a gorgeous woman, and very cool. She does put up with a lot from him, and he does put her through hell.  He doesn't seem able to be faithful. He needs to learn to keep it in his shorts. But that's part of his bad boy charm, right? And how he does charm the ladies, he really does.

His agent, Charlie, is cute too - not quite as charming, but he has his own sweet personality (although he has moments when he is a major tool himself). Let's look at Charlie. 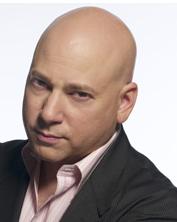 He's adorable! In the first season, he got fired from the agency he worked for - they caught him on camera too many times whacking off in his office. Later he has a dom/sub relationship with his assistant (the one who later represents Mia) and at one point he falls in love with a porn star of the film he produces - Vagina Town. He goes to work at another agency where his boss, superbly played by Kathleen Turner, demands he service her!  Charlie is a bad boy too, just not in the same league as Hank - and with more and worse consequences.

Bad boys - how we love them. But if  you don't give them consequences, they become one dimensional and boring. No one is perfect. No one is all bad either. A touch of humanity goes a long way.

Who are your favorite bad boys and why?  Tell me, I'd love to hear!
Posted by Julie Lynn Hayes at 9:57 AM