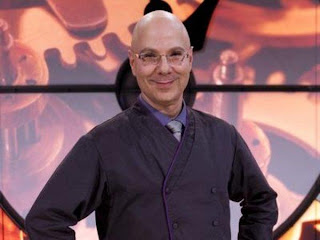 Think of the new show Sweet Genius as Chopped for desserts. The comparison was made in the promos, so it's  not a farfetched idea. Of course there are differences, and that is what makes the show unique in its own way.

So, what's the first ingredient in a show such as this? A great host! They've certainly found that in celebrated cake designer Ron Ben Israel. I confess to being unaware of him before I saw the first commercial for Sweet Genius, but in my own defense, I haven't exactly been in the market for a wedding cake either. 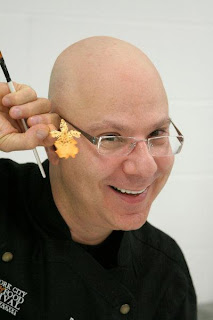 He is, to put it simply, gorgeous! There's something about him that draws me, something in his eyes. I could not keep away from the show if I tried! He is very personable and had a commanding stage presence. I've watched two episodes now, and enjoyed them both. 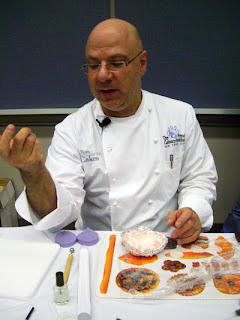 The format is similar to Chopped, but there is no basket of mandatory ingredients, per se. You start with four chefs, who are intro'd as on Chopped, and Ron explains that there are three rounds: Frozen, Baked and Chocolate. The first round comes with a mandatory ingredient, and an inspiration which the chefs must work from. In the first episode, the inspiration was darkness. Other inspirations have been a pearl in an  oyster, a Fabergé egg, and a cat. During each round, there will be other mandatory ingredients which will be presented to the chefs, which they must incorporate into their dishes. At the end of each round, Ron (who is the sole judge) tastes each dish and critiques. He decides which one does not measure up and he informs that chef that he or she is not a sweet genius, and they leave.

If it's not obvious by now (and I'm sure it is) I'm quite taken with the host. Er, I mean the show. No, I said it right the first time, it's the host. I do like the show, yes, but he makes it for me. I also watch Just Desserts on Wednesday nights, but I have to say that Ron is a better host than Gail is. I like her fine, but I don't think she has the strength or charisma that Ron possesses. I'm intrigued with his accent, but I haven't placed it yet. I just hope he talks more and more in coming episodes. 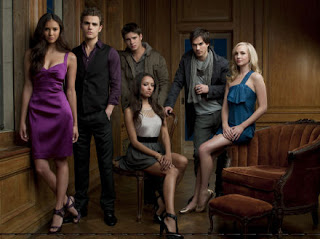 Vampire Diaries started its third season. Not surprising in a way, but somewhat in others. As you may remember, the last episode of season 2 was a veritable blood bath and free for all. So now, we have Elena and Jeremy with no living relatives. The writers smoothed over that dilemma quickly by moving the plot up to Elena's 18th birthday (so far the issue of Jeremy as minor has not arisen, but more on that). Alaric is camping out with them, or something. He's sleeping on the couch because he can't bear to sleep in either the dead parents' room or his dead gf's room. I don't know if he's supposed to be a surrogate parental authority but by the second episode, he's out of there and ready to throw in the spiritual towel. Quitter! 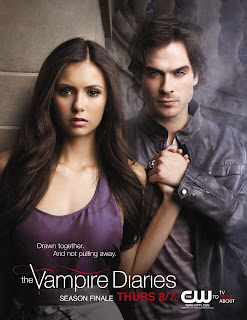 As you'll also recall, at the end of episode 2, Damon was bitten by a were, and that is pretty fatal for a vamp.  It looks like curtains for Damon (except we know better, seriously the show would fold immediately should they ever lose Damon Salvatore), but Elena doesn't realize this, so she gives him a last good-bye kiss. Surprise, he lives! And now he's tasted her sweet flesh, he wants more, and he intends to fight for it. While Elena, although pining for Stefan (the martyr sacrificed himself yet again, such a good boy) she is drawn to Damon, which is obvious. As I said, Stefan's doing the martyr thing, having agreed to go with Klaus in exchange for saving Damon's life. So now they're on a rampage in Tennessee and Stefan is killing with abandon. Damon and Alaric are tracking him through news clippings, but Elena finds out, and she still believes in him. A road trip to Tennessee with Damon leads him to believe the same, after a face to face with his brother. So I predict another road trip in the future, maybe some hot Damon/Elena action (any coincidence that they are allegedly dating in real life? Could be publicity driven, who knows. Ian can do better, I think, he's gorgeous, she's just okay).

So, what about the rest of the cast? Do they still exist. They do (except for Bonnie who really hasn't been  seen yet). Jeremy  (who died and was resurrected by Bonnie) is seeing things he shouldn't be seeing - namely his dead girlfriends. He's creeped out, and he's creeping out Matt as well. Caroline and Tyler did the horizontal mambo, and the next morning Tyler's mom caught Caroline - literally - with darts in her back. One vamp down! She tested Tyler with vervain but it didn't affect him cause he's a werewolf. She called in someone named Bill, who's being played by the guy who played Noah Bennett on Heroes, and they have Caroline locked up. Tyler puts two and two together, and on the night of the full moon, he forces his mother to witness his transformation. Howdya like them apples, Mrs. Lockwood? And in the kicker, we learn that Bill.... duh duh duh...... is Caroline's daddy. Interesting twist. We'll see how this plays out. We need to get Bonnie back in the plot, and I believe Elijah is unaccounted for. With Jeremy seeing dead people, who knows what past cast members might be resurrected? And of course there is Katherine. I don't remember what happened to her at the end of season 2, that's how little I like her.

Chopped Champions has its grand finale tonight, more about that later. Just Desserts is interesting, but I can't say it's the best Top Chef I've seen. I'm interested in seeing Top Chef Texas when it starts, and also the Next Iron Chef. I notice Sarah recorded The Chew, so I'm sure I'll be seeing that too - Carla (think Top Chef and hooty hoo and  you'll remember her) and Mario Batale are the only names I recognized in their line up. But those are two good names. 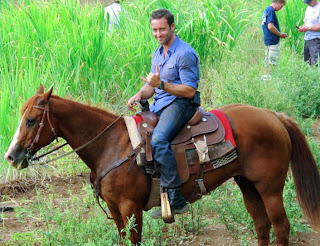 I watched the second Hawaii 5-0 today. I love this show so much! Especially, but not entirely for Alex  O'Loughlin. But primarily.

The new governor - former lieutenant governor - reinstated 5-0 after evidence came to light that McGarrett did not shoot the governor, although it was not conclusive enough to pin it on Wo Fat either. But the governor made it clear that things have changed, and that Hawaii 5-0 will have accountability. Today he proved he meant it by assigning a new member to the team, a former Homeland Security agent. Steve isn't thrilled and tries to keep her at a distance. But she grows on him. Which might be a good thing, since Kono's review before IA doesn't go well, and she's stripped of everything. I'm sure in future episodes we'll see more of the late governor/Wo Fat/McGarrett's dad connection. The greatest thing about the second episode is a scene in which Steve, Danno and the new girl are riding horses into a cult compound, and the boys start their typical bickering and she turns to them and asks "HOW LONG YOU BEEN MARRIED"  Best line ever. Again. 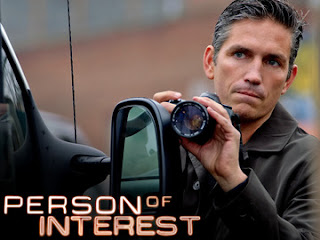 Okay, next new show. Person of Interest. Thursday nights, CBS. Michael Emerson and Jim Caviezel lead the  cast. I would never have discovered this show had it not been for Hawaii 5-0, cause that's the only time I'm on CBS, and it was just a fluke that I saw the promo. But something about it intrigued me, so I decided to give it a chance, and I'm glad I did.

At the beginning, Reese (Jim C) looks like a homeless person when he's attacked by young thugs on the subway. They picked the wrong person and he smacks them down handily, drawing the attention of the police. One female cop in particular is a recurring character, and she seems to be onto Reese. Finch (Michael E) is a billionaire with a lot of time and money on his hands. They have one thing in common - people think they're both dead. In a nutshell, Finch recruits Reese to his cause. He has a computer which was programmed to look for areas of trouble after 9-11. Every night it produces a list of non-essential data which it dumps, but these are actually people. So Finch retrieves them, one at a time. All he has is a social security number, but no knowledge of what will happen. Is this the victim, or the perp? Or the catalyst? Reese's job is to watch and prevent something from happening.

I really enjoyed the first show. It seems to be well written, fast paced, and definitely interesting, despite having  commercials (we watched it live, normally I record everything). It's also from JJ Abrams, who brought us the Star Trek movies, plus some TV shows I'm not really familiar with, so we'll see how this goes. But I'll definitely be watching it again. It comes on right before Sweet Genius, so I have two hours of TV on Thursday nights to look forward to, and two hours of crocheting.


I think that's it for now. I can't imagine what I've really forgotten. Whatever it is, I'll pick it up later.