Off to Ireland for a wee nip with Gabrielle Evans

Since there isn't anything I wouldn't do for my readers, I recently took a trip to the land of shamrocks and leprechauns and the Blarney Stone in order to meet with author Gabrielle Evans. Here is what she had to say.


Good thing Yaoi Radius has such a large travel budget, as today, I am in Ireland to interview writer Gabrielle Evans.  Nothing is too good for our readers!  I’m in a small fishing village by the name of Doolin, which is situated on the west coast of Ireland.  I make my way to the pub with the unpronounceable name—I won’t even try to say it, I’ll just butcher it. Approaching the bar, I ask the genial barkeep if  the lady in question has arrived.  He nods and points to a table in the far corner, asking me my pleasure. Unsure if she’s ordered, or what she might like, I tell him I’ll get back to him, and make my way through the natives to the object of my quest.
“Gabrielle?” I wish to ascertain, not make assumptions.  At her nod, I take my seat opposite her, holding out my hand.  “Hi, Brie, I remember now.  I’m not that senile.” I laugh.  “Julie, naturally.  Nice to meet you.  What a great place.”  I take stock of my surroundings, drinking in all the local flavor.  It’s Ireland, and it’s beautiful.  “Have you been here before, is that why you recommended it?”
After shaking hands, she settles back in her seat with a smile. "Glad you found it okay. It's good to meet you as well." She laughs as she glances around the pub. "I've been in a few times since I arrived. It's a friendly place." She waves a hand toward the bartender. "That's Grady, and you won't meet a nicer guy. Everyone has been very welcoming. I'm on a bit of a research mission for my next novel, and so far everyone has been a load of help." Refocusing her attention, she nods down at the empty tabletop. "Would you like a drink? Grady builds a mean Guinness."
“Builds?” I ask, showing my ignorance. It’s been a long time since I worked in a place that serves drinks, and they didn’t have Guinness around back then.  “I didn’t know it was built.  I mean, I thought it was a ready made sort of thing.  I’ve never tried it.  If you recommend it, I think I’d like to.”  I smile at the author, relaxing in her company.  This is such a neat place.  Memo to self: take lots of pictures.
“The nice thing about doing research is that you can deduct it from your taxes.  What’s your next novel about? Is it another on in your series, or something different?”


I take a breath, hoping I haven’t inundated her with too many questions all at one time.
She stares at me blankly for a moment, then shakes her head as if to clear it. "Uh, well you can get a burger or sandwich and some fries, though they call them chips here. I'd recommend the fish sandwich."
She plucks a thin sheet of paper from between the salt and pepper shakers and slides the menu across the table. "I'm working on four different books right now, doing pre-submission edits on another, and that's not even counting when I receive line edits in my inbox. I just work on one until I run out of ideas, or a character from another book has something inspiring to say. The time varies, but I guess on average, it takes me about three weeks to complete a manuscript." She shrugs. "It just depends on how long it is, and what else I have going on at the time."
Pausing to take a long drink, she tilts her head to the side as her brows draw together in concentration. "On average my books run around forty to forty-five thousand words. Some longer, some shorter. I have a little gadget that measures my word count progress, and I usually set the goal as forty-five or fifty thousand words. It's just a reference point though. If I feel the story is complete at thirty-five thousand words, I don't worry about the goal. I haven't purposely left a cliffhanger yet, but that can always change. Normally, I like scatter little hints throughout the book to give readers an idea of what's coming next in a series." She takes a deep breath and lets it out slowly. "So, did you decide what you want to eat?"
I almost say reply Grady but decide to behave. “Burger and chips sounds great, I’m not big on fish sandwiches.” I drain my Guiness, lick off the slight moustache that I just realize is there from the foam. I must look like a real doofus, I think.
“Sounds like you’re keeping busy,” I smile. “Is this your full time vocation, then? Or do you work another job to support your writing habit? I know how hard it is for writers to earn a living at their profession, most are forced to seek outside gainful employment, unless they’re lucky enough to have someone else support them.”
Holding up a finger, she hurries across the pub to the bar, presumably to place the orders, then right back to slide into her seat. "Yeah, I guess I'm one of the lucky ones. I have an amazing husband who works hard to provide for us so I can stay home with the kiddos. I was a stay at home mom long before I started writing." She shrugs. "It's what works for us. It's not all bonbons and soap operas, though. Between chores, errands, school, sports, and my writing, there are some days where I feel like I barely have time to breathe. Trying to keep up with so much can be stressful, but I'm sure you know that." She nods slightly. "I'm my own worst critic for sure. I get so nervous just before I new release that I can't sleep and just become this neurotic mess. Do you get nervous before a release? Or is that just a newb thing?"


She actually does snort. "I know what you mean. My best friend is gay, and he's asked me more than once if I'm sure I'm not a gay man." She continues to smile, but her brow wrinkles. "I won't say I don't believe in it, just that I've never given much thought to past lives or reincarnation. If I did have a past life, I think I may have been a man, but not a gay man. I find women just as attractive, only in different ways. With men, I like to feel protected. With women, it's the opposite, and I feel like the protector. Either way, I like to be in control and make the decisions. It's a delicate line to navigate. I think my husband was made just for me, though." She chuckles softly. "He takes care of me when I want him to, and backs off when I need space. I'm a lucky girl."
“You’re a very lucky girl, I hope that I can get lucky that way some day.  Does he have a brother?” I laugh before I finish off my very satisfying meal, pushing back my plate.  “Goodness, that was delicious. How about another round of Guinness, on me? Unless you have another drink you’d like to introduce me to? And then maybe show me around this town a bit, if you don’t mind?”
"Actually, there's another little place down by the water that I'd like to show you. We can get a drink there." Standing, she waves to Grady and motions towards the door. "I have a tab here, so I'll just pay for this later."


I follow Brie, waving to Grady in turn, giving him one last lingering look as we head out the door and off to our destination. My recorder is put away. It’s time to have some fun.  Talk to you later, dear readers! 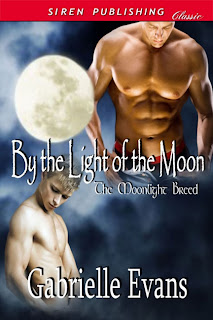 By the Light of the Moon [Moonlight Breed 2]
by Gabrielle Evans
Heat Rating: Sextreme          Novel Length (50,000+ words)
Siren Publishing – www.sirenbookstrand.com
Wildly flamboyant and proud of it, Keeton Taylor knows he’s a bit much for most men. Logan is everything he’s ever dreamed of in a partner, but learning they are destined mates throws him for a loop. Forever is a huge commitment.
Logan has spent years searching for his mate. He never imagined that fate would pick someone so perfect for him, though. His instant attraction to Keeton is more than just some shifter pheromone thing. It’s love at first sight.
His ex-girlfriend has other plans for the cursed shifter though. An Arsidian Demon in her mating heat, she is hell bent on having Logan as her own, and eradicating the competition…Keeton. Can Logan save his new mate before the full moon, or will he lose his angel forever?
Posted by Julie Lynn Hayes at 7:20 AM

Email ThisBlogThis!Share to TwitterShare to FacebookShare to Pinterest
Labels: by the light of the moon, full moon dreaming, gabrielle evans, interview, siren strand