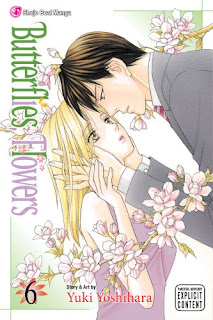 There’s good news and bad news for Choko and Masayuki. The good news is that at last the house of Choko’s parents, which was destroyed in an accidental fire caused by the neighbors, has been rebuilt. The bad news is that now she is moving back, and out of the home she has been sharing with Masayuki.

It’s their last night together, and sadness abounds, but Choko and Masayuki are determined to spend this last night  in one another’s arms—but they haven’t figured on the machinations of Mikihiko, Choko’s brother, who comes to take her home already. But apparently, it hasn’t occurred to him that their going back will mean no longer leaving next to Suou too. (Mikihiko still isn’t aware that Suou is no lady).Masayuki arrives the next morning with Choko’s things, as well as a request for the return of his spare key, since obviously she doesn’t need it. Choko is devastated—she isn’t ready to give up paradise yet, and neither is he. What can she do about it?

Choko and Masayuki are even more lovey-dovey than before, having had their third lovemaking session. To Masayuki’s chagrin, they are going on a company trip—he would have preferred taking her alone, but he has no choice in the matter. They are going to an inn which just happens to have a hot springs. Masayuki hates the way that the woman wait on the male executives, who are essentially boring pigs who like to brag about themselves. And President Yanagi is there as well, which is never good. On the trip, Choko learns that Masayuki once dated a girl who had worked in the administration department. The knowledge disturbs Choko, who can’t seem to get it out of her head, despite Masayuki’s protestations that that was over a long time ago, and Choko is the only one in his heart. A disturbed Choko has a bit too much to drink, and ends up where she shouldn’t. Can Masayuki save the day, and her dignity?

Back at work, a coup seems to be underway to oust President Yanagi. Thanks to Masayuki and Branch Manager Otaki, this effort is foiled and Yanagi saved. Otaki is known to be Yanagi’s successor since Masayuki turned the position down.  There is a catch, though—Yanagi is still determined that his successor marry his niece, Makie. But it seems that Makie is in love with someone else! In an effort to fix things, Masayuki assigns Choko to Otaki as his personal assistant. But it seems they’ve merely thrown oil on the fire rather than put it out!

When she was a girl, every Christmas Choko received a stocking full of candy from Masayuki, her Cha-chan. Now they’re grown up, and it’s Christmas time, and he’s trying to buy her jewelry. But she isn’t interested and tells him all she wants from him is a stocking, like in the old days. They make plans for her to go to his place on the 24th and spend a special night together, then the next day he can present her with his stocking. But the best laid plans of mice and men…. Masayuki learns from Yanagi that Otaki is in no hurry to be married; apparently he is love with someone, and it isn’t Makie. Choko learns that Makie and Suou (in men’s clothes! Le gasp!) have a date for Christmas Eve, which she thinks is wonderful. Until Otaki tells her that she has to accompany him to a party, and if she doesn’t, he’ll make Makie do it in her stead! Choko can’t do that to her friends, so what choice does she have? What does this mean for her plans with  Masayuki?

Masayuki picks Choko up for work the next day as usual, and drops her off to pick up the Chairman. Choko runs into a helpful woman outside their building, who offers to help her with her bags. It turns out this woman once worked there and has returned to do so again! Choko begins to put two and two together, and comes up with an identity for Masayuki’s ex. Things get awkward when Masayuki returns, and it seems that he is too attentive to this newcomer. Choko is definitely feeling threatened—but then it gets worse!

You can read my complete review at Anime Radius and Yaoi Radius!
Posted by Julie Lynn Hayes at 9:29 AM