What About Love? (and a contest at the end of the post)

In honor of the fact that today is Valentine's Day, and also Lupercalia, and because I have a new release coming out at Dreamspinner in two days time, today I want to talk about love.

Love is one of the strongest driving forces known to man.  Many wonderful things have been inspired by love, and also a number of atrocities have been committed for its sake.  People hunger for it, fight for it, die for it, and live for it. It keeps us going, gives up hope, and lives us up where we belong. Scientists will tell you that it's a chemical reaction and maybe on some level it is.  But I believe there is more to it than that. You can have combustability with someone and not be in love with them - that is lust - although often the two are confused. At least until the fireworks fizzle and the hormones die down and you look at the other person and wonder what the fuck was I thinking?

Falling in love is easy, it's staying in love that's the trick. Some people live to fall in love because that is where the rush is, in those first hazy crazy glorious days of an relationship, and when the rosy glow dims they're off to find it again. I hate to break it to you, but that part doesn't last, and it isn't meant to, or we'd never get anything done, walking around in a romantic fog of idealism. But in its place is something deeper, longer lasting and more meaningful - true love. True love burns deeply, even if not as brightly, not all the time, but it can have its moments of sparks too, don't think it can't. True love isn't just romantic dinners for two and moonlit walks - it's quiet moments when no words are spoken and none need be, simply enjoying the peace of each other's company, listening to your special someone talk about his/her day, sharing your feelings, your concerns, your dreams.  Dreaming together - that is a good definition of love. The ability to dream together, and make a dream a reality.

All too often, love changes because the people change.  Then it probably wasn't love to begin with.  Shakespeare said, in Sonnet 116, "Love is not love which alters when it alteration finds." In other words, if your love for someone changes because they change, then it wasn't love. Although I would take a little umbrage with his definition, because even true love can erode over time.  It does happen. But there is also love that lasts forever.  Most people strive for that one, and enter into marriage with that objective, but of course it doesn't always work. People point at high divorce rates and say that marriages are taken too lightly, but I disagree. Some people who remain together for years are very unhappy, and should be divorced. Longevity does not equate to happiness. Being married more than once doesn't make you a loser. Think of it this way - what are the odds of finding a compatible person who is perfect for you when you consider how many people there are in the world, and how comparatively few you actually have the chance to meet or know? Like looking for a particular grain of sand in a desert. You find one that looks right, but you find out you were wrong, so you admit your mistake and try again.  It happens.

Am I disparaging love?  Not at all. I'm all for it, for however long it lasts.  Alfred Tennyson said, In Memoriam, "Tis better to have loved and lost then never to have loved at all." I happen to agree. Which doesn't mean you don't fight for your love, just know that your life is enriched for having had love in it, no matter the outcome of that love.

Love is like chocolate - it makes us feel good. About ourselves, our loved one and the world around us. They say that music hath charms to soothe the savage breast. So hath love (a good dose of chocolate never hurts either).

My new story, Sweet Dreams, My Love is about love. It's a m/m version of Sleeping Beauty, one of Dreamspinner's Fairy Tale series. The cover is gorgeous, done by the talented Dan Skinner. The story starts in turn-of-the-century Paris, and I utilized my fascination for and love of the Moulin Rouge and the Impressionists and pretty men, combining them in this tale of love lost and found, of believing in your dreams and working to make them come true. 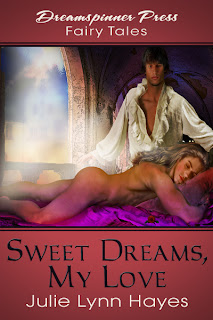 I'll post a blurb and an excerpt, and than the link for it.  I hope you'll check it out.  It's all about love, and despite everything, I believe in the power of love and always will.

Blurb: Can love conquer all? Is there such a thing as Fate? Do dreams really come true?

To help pay for his mother’s convalescence, Jakob Kohl leaves his musical studies in Germany in order to be a paid companion to his distant cousin Albert. It’s not a pleasant existence, but Jakob does get to travel to Paris, where he meets a beautiful man who asks for his help… a mysterious man no one else can see. Jakob soon fears he may be going crazy, because he finds himself falling in love with Damien, who says they were brought together by Fate—Jakob is the only one who can rescue Damien from the shadowy world where he sleeps and waits for his dream of everlasting love and freedom to come true.

Excerpt:The click click click of Toulouse Lautrec’s cane was a measured accompaniment to the perambulations of the artist and his youthful companion. The streets of Montmartre were uneven, cobblestoned, and given to steep inclines. Even the short distance that Toulouse and Damien had to traverse was difficult on the artist, but he never let it show, and his protégé was young and too intent upon their destination to notice.

The artist had not been born with this disability, but during his youth he had suffered from problems with each leg which, exacerbated by the close genetic tie between his parents, who were first cousins, had stunted the growth of his limbs even though the rest of him continued to grow, causing the legs to not be in proportion to the rest of his body. Although the stories that were told about Toulouse were quick to affirm that nature had not shortchanged him in the areas which were of immense interest to his lovers, perhaps by way of compensation for his lack of stature.

“Pere Toulouse, will I be allowed absinthe this night?” Damien leaned in toward the artist, slumping a bit to ease communication between them, to compensate for the eight or nine inches he towered above. For although the young man had been raised, as were most French youngsters, used to the consumption of wine, albeit watered, the green liqueur had always been off-limits. Tonight was a very special night. This was Damien’s eighteenth birthday, and it was also the night of his coming out party. And he was going to spend it with his twelve fathers at the infamous Moulin Rouge nightclub.

Twelve fathers? A biological impossibility! Naturally. And indeed, none of the twelve could claim the actual title of pere to this beautiful young man. But spiritually, all twelve of the artists who titled themselves the Dreammongers were his sires, for they had raised him among themselves ever since the fateful night, just eighteen years ago, when he had come into this world and their lives, while the Dreammongers were holding their annual revelry at the Moulin Rouge.

“Mais oui, mon fil,” the artist said with a nod. “Tonight you shall.”

Damien smiled. He could hear the sighs of the nighttime ladies of the Montmartre as he walked by, could feel their eyes upon him, aware of their attraction to his pearlescent beauty. He was very, very pale, a soft pallor which invited touching, and his platinum hair hung in lazy waves down to his broad shoulders, while his eyes were the green of sea foam, with traces of gold in their liquid depths. His full, rose-madder lips wore a perpetual smile, one which simply begged to be kissed. Damien was a very happy boy, and he loved his life here in Paris, and he loved his dozen fathers very much.

And now the nightclub itself lay just before them. That infamous den of iniquity.

Electric sex. That’s what came to Toulouse’s mind each and every time that he glimpsed the slowly rotating blades of the red windmill. The Moulin Rouge. Debauchery personified. Electric sex beckoned to him; it called his name and begged his participation. Lithe young limbs and warm embraces. Passion and music. Absinthe and opium. The Moulin Rouge was a purveyor of dreams. And Toulouse Lautrec was a most willing dreamer. He was an habitué of the most infamous nightspot in Paris, spending more time entangled in its spider web of sensuality than anywhere else besides his studio. The Red Windmill was the ambrosia with which he fed his muse, the nectar for his passions, and the fellow dreamers who frequented it became the impressions upon his canvases.

Toulouse paused for a moment, jostled by a pedestrian whose path bisected his own, also headed toward the nightclub. The gentleman in question had his head bent, his hat pulled low over his brow. “Pardon,” he muttered before disappearing inside.

From within, the sounds of gaiety spilled into the night, fingers of frivolity designed to ensnare the interest of the casual passerby. Toulouse paused, temporarily taken aback. For just a moment he had thought… but no, that was not possible. He would not dare to show himself here. Not after all this time.

Damien held the door for him, and the two men entered the Moulin Rouge, intending to pay their respects to the regulars before going to their private party.

Here is the link.

And here's the info for the contest! In honor of the release of Sweet Dreams, I will give away a copy to one of my followers.  All you have to do is follow this blog and comment on this post.  You  have from now until the end of the day Wednesday to do so - be sure to leave a contact email so that I can reach you if you win. Thursday I'll announce the winner.  Simple, eh?

Good luck, and thanks for reading!
Posted by Julie Lynn Hayes at 8:52 AM