For over thirty years, off and on, I used to watch soap operas, most of them on CBS. They ran the gamut from Search For Tomorrow to Guiding Light to the Young and the Restless. My particular favorite was As the World Turns. I had to give up watching it maybe ten years ago or so because time became a consideration. Even with recording the episodes, which reduces watching time from the original five hours down to something more manageable, I still couldn't do it. Sad to say, I missed out on the gay couple they had going for them before the show's demise, but I applaud them for it nonetheless. I think I learned a lot about writing from watching that show, whether I realized it or not, from following plots and character development. I got to know the characters pretty well.  It's hard not to when they're living out their lives in front of you on a daily basis. I think one of the contributing factors to the demise of the soap opera as a genre - and yes, I think it's very much dying - is that the changes are so gradual that you can skip episodes and only watch on a part time basis and still keep up with the plot. Viewers nowadays want more, I think. And they're crunched for time too.  Not to mention that you can get your fill of faster paced night time soap operas which don't have that five day a week thing going on. Maybe the onset of Dallas, all those years ago, was the beginning of the end for soaps?  I don't know, and at this point in time, it's moot.

But one thing I did notice from watching for so many years was this: a lot of grief, drama and aggravation on the part of the characters would have been easily solved by the simple act of communication. Much of the drama stemmed from Character A having something they didn't want Character B to find out about, because it would cause drama/bloodshed/heartache/pain/hate/resentment/whatever. Whether it was the true identity of a baby's father, who this character had slept with that they shouldn't, what they did - ie stole, killed, prostituted, lied, etc - it was something that A concealed from B. The truth of the matter, as I discovered, is that the truth has this ugly way of coming out, no matter how you try to hide it. Sure, some people get away with it. But not most, and you can't count on being so lucky. And generally B, once they get over the initial shock/dismay/disgust/whatever, comes to accept it and the couple begins to heal. In these cases, though, I noticed a correlation between the length of time for which the secret was concealed, and the length of time for forgiveness. I drew this conclusion - the truth is going to come out anyway, so don't lie, be honest, get it over with.

Hooray for honesty and communication. But as an author, I realize why that doesn't work, the primary reason being that you take away that source of drama, you just shot your own story in the foot, effectively disabling it. Tension and drama make for stories we want to read. It's the conflict that our stories are built upon. So yeah, maybe honesty and openness is to be desired in real life relationships - and I do believe it is - in our books, not so much.

The miscommunication doesn't even have to be an actual lie,either. It can be a sin of omission, in that A led B to believe something that wasn't true through the art of - wait for it...

We all know misdirection. It's the magician's stock in trade, it's what he does to keep our attention glued to one spot while the trick goes on in another, so we don't notice the trick. Like those magicians who claim to be able to make large buildings or landmarks disappear.  You and I know that can't be done, but with misdirection it can appear to be. Add to that the audience's willingness to believe and desire to be bamboozled, and well folks, you gotta show.  There's something to be learned here from our magician friends, methinks.

Mystery writers have done the same thing since time immemorial. They litter their books with seemingly important clues that actually come to nothing or mean nothing. But while you're pondering those red herrings (and yes, I have to say it - communism is just a red herring. Sorry, seen Clue too many times, couldn't pass it by), the real clues sit there, unnoticed.  Assuming they're even there at all.  Some writers cheat, in my book, and only reveal things in a dramatic last minute Let me explain to you just what happened revelation by the most marvelous, perfect, intellectually superior detective character. That seems like cheats to me.  You want to impress me? Put those clues out where I can find them, and if I don't do it, then shame on me. If I do, I can pat myself on the back, and feel good about solving the crime with the hero.

There's an old movie called The Last of Sheila. It came out in the early 70's and had an all star cast (at the time, I know not all of these names are familiar to some of  you) - James Coburn, Richard Benjamin, James Mason, Ian McShane, Raquel Welch, Dyan Cannon and Joan Hackett.  It was actually based on party games that the co-authors - Anthony Perkins (Psycho anyone?) and Stephen Sondheim wrote and performed in their own homes. It concerns a wealthy man named Clinton (James Coburn) who invites his friends to join him on his yacht on the anniversary of his wife's death via a hit and run driver for some fun and games. Except the games aren't quite as innocent as they might appear to be. The interesting thing is that the clues are all there, if you open your eyes and look for them. You can actually piece together the mystery and solve it. I have to say I couldn't do that, basically because I came into the film halfway through it the first time I saw it. But it can be done, because having watched it numerous times, the clues are there, if you can follow them, and don't let yourself be misdirected. 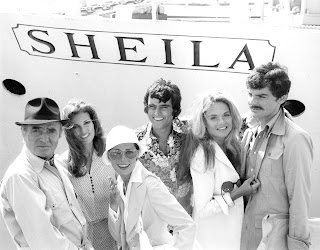 I'm not knocking misdirection, by the way, just commenting on it. It's not necessarily a bad thing. Neither is miscommunication. It all adds to the drama, and therefore to the story. Cause face it, if our heroes and heroines confessed and were honest right away, we wouldn't have a book, now would we?

Another most excellent example of misdirection is Sleuth. I saw the play years ago, with Anthony Quayle, and let me tell you, I was mesmerized, both by the actor and by the play. Since then I've seen the Laurence Olivier/Michael Caine film, but not the Michael Caine/Jude Law version. I intend to. And I can't tell you a thing, cause that would be to spoil it, which I won't do. I highly recommend getting the film, though, if you've not seen it. Be prepared to sit back afterwards, and say holy shit, I didn't see that coming.

Do you practice misdirection in your books? Maybe you just like to read about it. Does it come about accidentally, or do you plan for it?  Tell me your thoughts, I'd love to hear them!
Posted by Julie Lynn Hayes at 8:15 AM