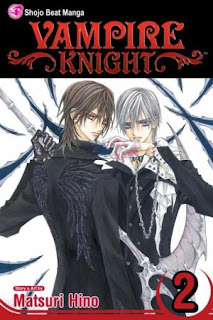 The Day Class is unaware of Zero’s secret—he is a vampire, and has been turning more and more so over the past four years. If they knew the truth, would they be so quick to embrace him as the rising star of their class? And how will the knowledge of what he is becoming affect his relationship with Yuki?
Yuki and Zero get an unexpected privilege—they get to run into town on an errand for the headmaster. Normally, leaving school grounds is rather restricted. Yuki is determined to have fun, even if Zero seems determined to be a killjoy. She wants them to crowd as much fun as they can into this day. He’s concerned about returning by sunset, but she reminds him that the Night Class is off so they won’t be coming out. No harm in living a little, right? They stop to eat at a café, but when one of the girls who works there mistakes Zero for a member of the Night Class, he becomes agitated, knowing that he smells like them now. He runs off, and Yuki must find him. Only in her search for him, she is found instead—by a vampire!
Headmaster Cross does his best to make mealtime for Yuki and Zero as normal as possible, but his idea of dishes is a bit odd. And bringing up the blood tablets that Zero needs to survive does not enhance that boy’s mood any. Ichijo and Shiki of the Night Class invite them to come to the Moon Dorm after midnight for answers to their questions, and Yuki is determined to go, although not so sure Zero should, not in his present state of mind, when it seems as though he is dying to shoot someone. There she learns about the different classes of vampires – from the level A purebloods to the Level E, who are even below the former humans. E stands for End—former humans eventually fall into this category, and into insanity and thus reach their end, end standing for destruction. Something Zero undoubtedly knows, coming from a vampire hunting family. Kaname welcomes them, and insists that Yuki sit beside him. She resists, but not for long, being irresistibly drawn to him. With his touch, he heals her wounds.
When blood is deliberately let at the party, Zero flees in disgust, with Yuki right behind him, concerned about him. Yuki discovers the truth about Zero and blood tablets, and he is about to take blood from her instead when suddenly he finds himself at the wrong end of a gun being wielded by a vampire hunter who is none other than his former master! His name is Toga Yagari, and he is also an acquaintance of Headmaster Cross, whom he considers to be a twit.  He sends Yuki to bed while he debates with himself on whether or not to kill Zero or to let him live.
The next day, Zero isn’t in school and the vampire hunter is now lecturing on Ethics to the Night Class, in a curious turn of events. He reveals to Yuki where Zero is and she goes to him—to finish what was previously interrupted.
Bonus stories include Sometimes There are Lazy Days Too, in which Yuki and Zero are forced to take a supplementary class, and the teacher refuses to let them leave until they’re done—even if it is sundown and time for them to take up their disciplinary committee duties! In I Must Have Been Born Under the Victim of Circumstances Star, we learn how Idol and Wild got their nicknames. And inVampires Covered in Blood are Prohibited From Entering this Page, we get a brief glimpse into the past which will be explained in the future.
You can read my complete review at Anime Radius and Yaoi Radius!
Posted by Julie Lynn Hayes at 5:23 PM