And the winner is...

Yes, I'm late in declaring a winner in my No Place Like Home contest, and for that I do apologize. But I have a winner now, and will be announcing that person in just a few.

First, I'd just like to do a mini-rant. A reviewer, who shall be nameless, went on a rant in her review of a book about the book's anti-infringement/copyright policy! Seriously? You let this upset you? How many people even look at that. Not even the pirates they're aimed at do that. And yet someone who claims to have gotten a legitimate copy of a book gets all hot and bothered about the warning by the publisher against theft? What the hell? She ranted on it in the review and at her blog, and I have to say that I think it colored her review. That is some seriously irrational shit, I'm here to tell you. Can we all say anal?

Anyway, nuff said about that.

Tomorrow, the fourth part of my Forbidden series will be released. It's called Fugitive.  So let me share a little bit of that, if I may. It can be pre-ordered at ARe now. 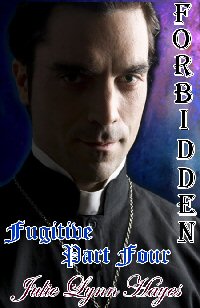 Blurb:
A jubilant Jerico James has just given Father Sergio the slip in the barn, and he’s feeling rather fine. All he has to do now is find a phone, call one of his friends, and prepare to leave the sticks behind. But that’s far from a done deal when he finds himself unexpectedly engaged in a struggle against nature. Is this city boy prepared to rough it in the wild until he can reach civilization again?  What’s lurking in the woods?
Excerpt:
He hesitated for a moment, gazing intently at where Sergio lay, barely able to make out his form in the darkness. A twinge of regret suffused him—regret for what might have been, if he only had time. The fun they could have had together… But that fun would have come at the cost of his continued incarceration, and that was a price he was unwilling to pay.
Arrivederci, bella. Touching his fingers to his lips, he blew a kiss in Sergio’s general direction, then headed for the door. He reached for the door handle, but there was none.  Instead he found a vertical pull and an intricate latching mechanism, neither of which he was familiar with in any way. He spent a good five minutes standing in the darkness, his fingers feeling their way around the latch. The doors were on rollers suspended from above. He hadn’t paid any attention to them the night before during the mad dash through the storm, but he remembered Sergio sliding the door closed.
Finally he found the latch release and sighed in relief. A snort from the darkness froze him in place. He held his breath. Any moment he expected the priest’s hand to clinch around his neck and a sexy voice to ask where he thought he was going. Another snort was followed by a soft whinny. He released his pent-up breath feeling very foolish.  He had to get out of here.
The latch unfastened with a click, the hardware creaking as the heavy door sprung free. He glanced up at the sky—no rain. Thank heaven for small favors; maybe there really was a God.  Clouds concealed the moon in layers of dark cotton. He hesitated in the doorway, thinking how useful it would be to have the lantern.  Then he decided against it. Let the poor people keep it. They had little enough as it was, and none of it was worth taking.
Jerico glanced over his shoulder, and then rolled the wooden door open until he could just slip through. He squeezed through the narrow aperture and took a deep breath. He was free, but he wasn’t gone. Not yet. Pulling the door closed, he allowed some positive thoughts to creep into his brain. Things might just be going his way at last. Is that a sign, Father Sergio? Is your God on my side for once?
The sun wasn’t up, but he figured he didn’t have long before hayseeds would pop out of every house, barn and field for fifty miles. He wished he had his cell phone.  Any of his friends would be willing to rescue him from Backwater America.  It didn’t matter. He’d get another phone once he got back to civilization and away from this rural nightmare

And now for the winner...

Congratulations goes to Mel B!  You get your choice of my books, I'll be emailing you shortly! Thanks to everyone who entered, and keep trying. There'll be another contest soon, as well as blog hops!

The new Silver Shorts anthology is now available at Silver Publishing! Download it now, it's free flash fiction from the authors of Silver Publishing.  This week, I used the prompt "Spring rain reminds me of..." I am proud to present to you my story, Wedding Cake Blues. Enjoy! 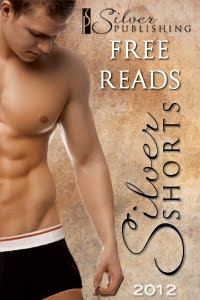 Happy Hump Day and welcome to another offering of flash fiction from the Wednesday Briefers! Here are this week's prompts:    "Spring fever or hay fever, I don't know...."  or or the alternative prompts: "Love is in the air" or use: octopus, Vienna sausage, Rice Krispies or "Just a spoonful of  (fill in the blank) makes the medicine go down" or it's laundry day and your character hasn't a thing to wear!  or "Yes, we have no (fill in the blank)".


In last week's Dallas in Wonderland, as you'll recall, Dallas finally got his wish to have some alone time with Samuel. Let's see what he does with it, in this week's chapter. Enjoy! And don't forget to visit the other Wednesday Briefers, who shall be listed at the end of this blog!