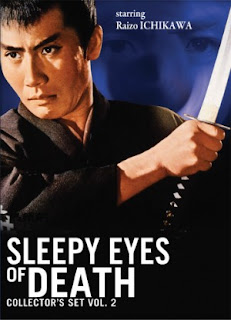 Can a man conceived from the rape of a Japanese woman by a crazed Christian missionary during a Black Mass find true happiness?  Or is Nemuri Kyoshiro doomed to wander forever, with no direction of his own?

Sword of Fire: Nemuri comes upon a woman being chased by a man wielding a sword. She begs him to come to her assistance, as she is justly avenging her husband’s death. The man warns Nemuri that if he helps her, he will only disgrace himself, but what does that mean? Afterwards, she takes him to meet the Chief Retainer, Atobe Shogen, who shows him the Execution License. All seems to be in order, but is it really? It seems that Atobe is in cahoots with the local merchants, one in particular being Narumi, the rice merchant. And they have a secret involving  a group of pirates known as the Toba Suigun, whom the Shogun has ordered the Todo clan to completely destroy. Unbeknownst to him, Atobe diverted half of the pirate’s confiscated treasure to himself. But it seems that not all the pirates’ families have been killed; a few have ended up in Edo. Nemuri finds himself in the thick of things as he contends with the widow Nui, who is not what she appears to be, and the remaining survivors of the pirates. He has to decide when and how to intervene, and he has to figure out just who is telling the truth

Sword of Satan: On a rainy night, Nemuri is approached by a woman who requests that he purchase her for the night. He goes to her home, where he discovers she wears a Noh mask; he demands she remove it. He pays her but leaves rather than sleep with her, not moved by her story. When she kills herself, he wonders if it is some fault of his. He runs into a woman named Orin, whose brother, Banzo the Flying Squirrel, was killed by Nemuri in a fair fight. Orin is determined to get revenge. Nemuri learns that he is mentioned in the dead girl’s will—she left him the money he gave her, and her mask. It seems that she also leaves behind a five year old boy who is not her son, but whom she loved like one. His name is Tsurumatsu, and he says he hates samurai. Meanwhile, we learn that the Iwashiro clan is in trouble; if the heir is not in the fief, the clan will be disbanded by the shogunate. Elder Mizuno and chamberlain Kikimura are hardly innocent in this arrangement, and have less than unselfish motives for wanting the boy returned to the clan. Nemuri has sworn to help the boy in any way he can, now his challenge is to go to the fief where he is being held, and return him to Edo, so that he can live as a carpenter, as he desires. It won’t be easy – Orin is determined to stop him, and he must contend with the Elder and the fighting men of the clan, not to mention the wiles of women who are determined to waylay him from his true path. Can he reach Iwashiro and rescue the imprisoned youngster?

Mask of the Princess: Remember a crazed daughter of the Shogun who caused a lot of death and mayhem in the first Sleepy Eyes of Death series? Well, she’s back and as determined as ever to get her revenge on Nemuri Kyroshiro—she wants his head! As Nemuri seeks the Izutsu’s household, he is accosted by a group of men who offer him a fifteen year old virgin! Interestingly, this virgin is in the household he seeks, so he goes along with them, and once there he reveals that he has been invited there by someone named “Kiku”. As he is being shown the young virgin, who claims to hate samurai, the true purpose of his being lured there is revealed when Nemuri is attacked! His attackers turn out to be the Bushu Hayate group, protectors of Kiku, who is the Shogun’s daughter. Nemuri also meets a man named Ten’ma, who says he seeks vengeance and wishes to learn the Full Moon Cut from him, but Nemuri refuses. Nemuri buys the young girl out of her contract, and helps her find a job. In the meantime, a second woman’s body has been found, murdered, with a black cross drawn on her lower abdomen, beside a message which reads, “Nemuri Kyoshiro molested her!”. Nemuri finds himself the object of interest of Constable Heihachi, but he isn’t arrested. In order to clear himself, Nemuri goes to Hanjo, to the dojo of the husband of the murdered woman. His name is Akamatsu Kanbei. Kanbei accuses Nemuri of killing his wife and prepares to face Nemuri’s Full Moon Cut. But Kanbei has the advantage—he understands how Nemuri’s signature style works! When the young girl, Haru, is kidnapped by the crazy princess, it is up to Nemuri to save the day.

Sword of Villainy: What do a child at play, a hairdresser, a dancer, stinky water and a dead sensei all have in common?  They are all elements of the complicated plot facing Nemuri Kyoshiro in this eighth episode of Sleepy Eyes of Death! Nemuri’s man Tetsu is a hairdresser who knows how to be in the right place at the right time, telling his friend the tale of a merchant and his family who are tied up while a stranger plays hide and seek with a young girl and searches for something. How does Tetsu know this? Well, he was doing some research of his own, and came away from the storeroom with what he hopes is “prolonging longevity sake”. He offers Nemuri a cup, but when he pours it for him – phew! It smells awful so he throws it on the ground. Nemuri uses an em ber from his pipe and the liquid flares up! The men try to put it out with water, but it only grows hotter! A quick thinking dancer smothers the flames because she knows the secret – this is no sake, it’s stink water from Echigo, and quite combustible! In this episode are wheels within wheels, plots within plots. A group of rebels seeking to gain revenge on behalf of their late sensei, killed in an uprising. Greedy merchants. A woman scorned seeking to get even with the man who used her. Yojimbo with minds of their own. A mad plot to burn Edo to the ground. What can one man—ie Nemuri Kyoshiro—do to avert disaster to over a million people?
You can read my complete review at Anime Radius!
Posted by Julie Lynn Hayes at 3:35 PM