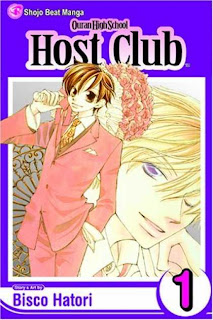 Some Like It Hot meets Twelfth Night meets high school?  Haruhi has no intention of disguising her sex, she is simply looking for a quiet place to study, and the libraries are full as she stumbles into what she assumes to be an unused music room - and directly into the arms of the Ouran High School Host Club!  This host club is comprised of six wealthy young men with too much time on their hands who cater to the female elements of the school in order to amuse themselves.  They are outside of Haruhi's usual purview - being a scholarship student, she is not of their social class.  Thus their unawareness of her actual gender, as they welcome her to the club, led by club president Tamaki.  Haruhi is flustered at finding herself among these six lovelies and, in the course of flailing about, accidentally smashes a valuable vase into smithereens!  Replacement cost - $80,000!  Opportunity gained for Haruhi - priceless!  Now the question is, will she appreciate it, and will they?
As payment for this costly trinket, Haruhi finds herself impressed into service at the Host Club as their dogsbody, and she becomes acquainted with each of the members:  Tamaki is the president/king - arrogant, self-centered, incredibly vain and incredibly good looking; Kyoyo, the vice-president, is bespectacled and studious; Kaoru and Hikaru are twins and very devoted to one another; and Hunny and Mori complete the group - Hunny, although 18 looks like a young child, and is often treated as such, with his naps and his bun-bun, and Mori is his long time friend/companion of the heart. The spoiled rich boys seem fascinated by Haruhi's poverty, and in an act of kindness, Tamaki declares that Haruhi's debt to the club will be waved if "he" comes up with 100 customer requests (not yet realizing that Haruhi is indeed a she).  To that end, Tamaki gives Haruhi instructions on such important techniques as looking up from below, and the elegant way to place a glass upon the table.  They send Haruhi shopping, and are amazed that he brings back instant coffee!  They have no experience with it, so everyone has to try it, naturally  - to appreciate how poor people live.  Which leads, naturally, to experimentation with ramen, which they refer to as prole noodles (and Tamaki becomes addicted to).
They shine and polish Haruhi and set her into position as a host - and the girls that frequent the club are drawn to her,  unaware of her true gender, especially when she reveals her tragic story of her mother's death, and the way she knows her way around a kitchen.  This includes one of Tamaki's regulars, Miss Ayanokoji.  But when mean things begin to happen to Haruhi, she has to wonder how benevolent that interest is.  But perhaps it is a fortuitous thing, for it draws Haruhi closer to the members of the club, and the truth is finally revealed.  Not that she lied about being a girl - they never asked, simply assumed otherwise.  Once it is known, though, they agree to keep her secret, for the sake of the host club.
Posted by Julie Lynn Hayes at 10:01 AM