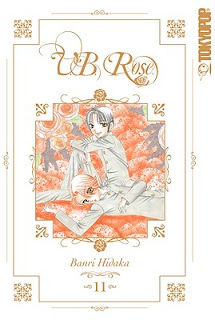 Ageha innocently asks Kuromine and Arisaka, “So how long have you two been together?” She doesn’t mean it like it sounds, but the question seems to annoy Yukari and amuses Kuromine as we begin Volume 11 of V.B. Rose.
Kuromine isn’t helping matters any when he reminds Yukari that they’ve almost made it to their tenth anniversary, the diamond anniversary. Luckily (or is it unluckily) for Arisaka, he is needed to help at Rosa, which leaves Kuromine free to wander down memory lane and to tell Ageha the story of how these two boys met.
According to Kuromine, there are four characteristics which girls use in order to determine a boy’s popularity:  1) good looking 2) athletic 3) funny 4) tall.  And in middle school, while Kuromine scores a perfect ten in those attributes, alas, Arisaka does not. Kuromine hasn’t even noticed him at first. But then he does, and he starts asking questions, learning about his famous actress mother. The first time he sees Arisaka smile, he is smitten.  A great bromance is born!
There’s only one problem—it’s very one-sided!  In fact, Arisaka seems intent on evading every attempt at friendship from Kuromine!  What’s up with that? Kuromine chases after him; when he catches him, he compliments Arisaka on his looks, comparing them to his famous mother—and receives a punch in return! Yukari tells him, “Anyone who underestimates me is going to end up in a world of pain.”
Kuromine ponders his words. When he encounters his little brother Shizuya, who is rather the worse for wear, he discovers that he’s been in a fight with a close friend, but all’s now well between them. Hmmm, is that what friendship means? Did he and Yukari have a fight? Mitsuya wonders.  He realizes that he is in possession of Arisaka’s book, the one he always carries with him, forgotten in the course of their fight. He must return it to him, of course, but first he looks inside—and what he sees will change the course of their lives forever!
It’s all about fashion design and making clothing. He had no idea Arisaka is into that stuff. Before he knows it, he’s devoured the book. But when he would return it to Arisaka, he’s not in school! A few days go by with no sign of the other boy, so Kuromine decides to go to his home and see what’s up!
You can read my complete review at Anime Radius and Yaoi Radius!
Posted by Julie Lynn Hayes at 6:20 PM