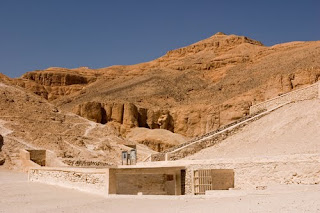 Here we are in the Valley of the Kings, near Luxor, and there ahead of us you can see the tomb of King Tutankhamen himself. Today JM is going to answer the infamous Rick Reed questions and tell you a bit about her new release, The Wishing Cup, and one lucky commenter will be able to win a copy of it!  Isn't that exciting?  Details will be at the end of this blog, so stay tuned!  Good morning, JM, hope your camel's not being too tricky for you! Ready for a full day in the Valley of the Kings? Splendid! Let's get started!

The Questions
1)     You’re marooned on a small island with one person and one item of your choice—who is that person and what item do you have?  Oh, this question just tickles me.  Who could I stand to be marooned with?  Better yet, who could stand to be marooned with me and not want to kill me within two days?  I say two days and not 24 hours because the shock of being stuck on the island would most likely keep things on track for a bit.  But suffice to say that I am known for being fairly high key…  But I have a marvelous friend who can pretty much complete my sentences.  She is resourceful and clever, which is a plus, and it might be a week before she wanted to kill me (an even bigger plus).  My item of choice would be a Swiss knife, preferably one with lots of gadgets attached.

2)   Which musical would you say best exemplifies your life – and which character in that musical are you?  This one is a toughie.  Most musicals have romantically happy endings.  My romantic life doesn’t have one of those.  However, I did get to live through a whirlwind romance of epic proportions – or at least it seemed that way to me.  I received flowers at work and love notes left on my car windshield.  Poetry was written just for me.  It was like a bolt from the blue hit us both, and it was magnificent while it lasted.  I wish everyone in the world could experience something like this.  When it ended, it hurt hugely, but I wouldn’t trade the experience for anything.  So, what musical would that be?  Picture those few moments when Anna waltzes exuberantly with the King in The King and I.  For the few moments of the dance, I am Anna.
3)   Take these three words and give me a 100 word or less scenario using them:  pleasure, halting, regrettably.  I love Haiku, so here goes:
Stars above halting,
Pleasure seeps into our pores,
Regrettably brief.
4)   You’ve just been let loose in the world of fiction, with permission to do anyone you want. Who do you fuck first and why?  Sue me for being a freaking fan girl (or should that be shrieking fan girl?) but I would love to have sex with Dean Winchester.  The boy is a people pleaser, obviously enjoys sex (Dean, the best-sex-of-your-life-Dean?) and is oh so very, very pretty – and has perhaps the most beautiful mouth on the planet.  Not like I am obsessed or anything…
5)   What is your idea of how to spend romantic time with your significant other? At this moment in time, my significant other is an 18 month old Australian Cattle Dog.  He is extremely loyal and very jealous.  He does not like me to look at other dogs, much less speak to them.  Still, he thinks I am da bomb and can do no wrong. He isn’t a great cuddler, but I don’t mind as he is good at licking toes.  That’s about as romantic as it gets at my house these days.  (Sigh.)   See why I conjure up delicious m/m romance?
6)   When you start a new story, do you begin with a character, or a plot? I love a character-driven story, with a side-bar of plot, so naturally, that is what I write.  Often my characters talk in my ear.  And more often than not, they grab the story I am writing and start driving it all by themselves.  It can be lots of fun, but also incredibly annoying!
7)      If they were to make the story of your life into a movie, who should play you?  I would choose the actress Alex Kingston.  I just adore the bold, outspoken female characters she tends to portray.
8)   Who’s your favorite horror villain and why?  I abhor most horror stories and movies, but I do have a certain fascination with Bram Stoker’s Dracula.  Frankly, the real and very dark story of Vlad The Impaler is even more interesting.  Can you tell I have always had a historical bent?
9)      Do you have an historical crush and if so, who is it?  I have had a crush on Leonardo da Vinci for many, many years.  I picture him as he was depicted in the movie Ever After.  I think I admire his line drawings and inventions even more than his oil paintings, though they are none too shabby. (LOL)  He had such an inquisitive mind.  It seems to me that he must have been the kind of man who would live by the maxim: To thine own self be true. (I would have a crush on Shakespeare, but who knows exactly who he was!)  But I think perhaps this is not the kind of crush you mean as I don’t dream of having sex with him.
10)   Is there a story that you’d like to tell but you think the world isn’t ready to receive it?  Well, actually, no, I don’t think so.  Some of the world isn’t ready for the type of romance I write now!  But I think there is always room for a new story or idea to be explored through text, even if not everyone agrees.  Thank goodness for freedom of speech!
Blurb:
Orphaned as a boy and brought up by the crusty, disapproving Edward Collins, 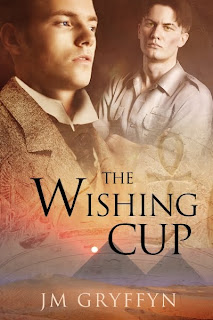 Dr. David Jameson may not  know much about love, but he makes up for it with an encyclopedic knowledge of Egyptian history and language. Too bad his job as linguist for a team excavating in the Valley of the Kings puts him right under Edward's nose. When the discovery of a rare artifact leads to a disagreement between guardian and ward, Jeremiah McKee, the team's American benefactor, sends no-nonsense Jake Tanner to protect his investment.
Excerpt
David raced through the train station, looking left and right, his heart in his throat.  As he ran, he prayed to no God in particular to please, please let the man be there.
What if Tanner had grown tired of waiting?  What if he’d sent a telegram to Collins complaining that David wasn’t at the station when he arrived?  What if...?  Slowing down, he came to a halt in front of the double door that led to the trains.  Turning, he surveyed the station.  A few people were standing around waiting for the local, but none wore western dress.  With a long suffering sigh, he scratched at his nose and headed out the door to the platforms.
It was full dark now, and the small lamps scattered at intervals gave little illumination. Looking to the left, all he could see were two old women sitting on a bench.  A train was approaching from the right; it sounded a warning and thundered into the station.  As the engine braked, steam and smoke belched from the stack, filling the air with massive white clouds.  The train screeched to a shuddering halt, and people began to disembark.  None of them seemed to be the Western businessman David was expecting.  He sighed once again in frustration and started to slowly turn on his heel toward the door to the station.  That was when he saw him—a man in a long dark coat, emerging out of the smoke like some sort of apparition conjured by a magician.
David stopped in mid-turn and watched the man come toward him.  The stranger moved with economy, his hips loose and his stride long, like some lean, alluring animal.  His hands were stuck deep in the pockets of his baggy white flannel trousers, his dark dress shirt open at the neck, revealing the deep Vee of collar bone.  David couldn’t keep his eyes from that small patch of tanned flesh.  It did something to him so that, though he knew his mouth had fallen open and he was staring, he simply couldn’t care less.  He was aware he should cross the platform to greet the man, but he couldn’t for the life of him move a muscle.
The dark-haired man drew close, stopped in front of David and gave a scathing smile.  “You have dirt on your nose.”
David took in a flash of even white teeth, high cheek bones and unreadable brown eyes.  Blushing all the way down to his toes, he stammered a greeting, “Hh...hello, I’m David Jameson. Edward Collins sent me to fetch you.  Um, you must be Jake Tanner.”  He extended his hand to shake, and then quickly pulled it back when he saw it had a streak of grease on it.  “Oh, sorry, I had a flat tyre on my way here, that’s why I’m late.”  He hated that he couldn’t seem to speak without stuttering.
Tanner gave a wry smile and shrugged broad shoulders.  “No problem.”  With that, he pointed to a pair of matching leather satchels stacked over by one of the benches.  “Those are my bags. Where’s the car?”
David surreptitiously rubbed at the dirt with one hand as he gestured toward the station with the other.  “It’s along this way.”  He grabbed the larger of the two bags and made for the Arrow.
And now the contest!
You can a win a copy of JM Gryffyn's ebook novella The Wishing Cup for your very own.  Here's how it works.  The faience cup found in the novella is inscribed with this wish for the Egyptian queen Sif-re: “May your ka live, and may you achieve millions of years, you who love Thebes, sitting with your face to the north wind, and your eyes seeing happiness.”
This becomes David's wish for his lover Jacob--for his long life and happiness.  Come up with your own wish for your own lover, whether it is the one-true-love you have already met and claim, or someone you dream about meeting.  Make it special, make it poetic.  To enter the contest, sent a comment to this blog and include your wish.  JM will read all entries sent by midnight on Monday, June 27th.  The grand prize winner will be awarded with a pdf of the novella!
So don't forget, enter here for your chance to win a copy of this marvelous novella! If you want to know more about JM, she has a blog at Live Journal, check it out!
Thanks for agreeing to take this little excursion with me, JM, I just adore Egypt! Well, shall we get to sightseeing? As for the rest of you, say hello to JM and enter her contest! Leave a comment, and don't forget to tell us how we can reach you, aka your email address! Thanks for stopping by!
♥ Julie
Posted by Julie Lynn Hayes at 7:36 AM