If you've spent any time reading my blog, by now y'all know my good friend, fellow author and co-author, 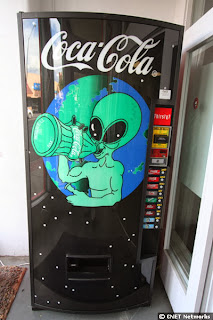 the one and only M.A. Church. She has a very special book coming out soon. It's called The Harvest, and she's gonna tell y'all about it. Take my word for it, you'll want to know all about it. Hey M.A., check out this new Coke machine I got for ya.


Aliens?
Spaceships?
Breeding programs?
And life-changing events that’ll take me on a journey that will lead to the love of a lifetime. 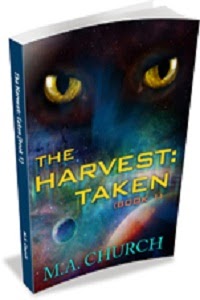 Life changed for all of humanity in the year 2050 when the aliens first appeared. The name of their planet was Tah’Nar—and it was dying. Originally, the Tah’Narians were an intersexed warrior race. Chemical warfare had essentially rendered them sterile. Many scientists, from all over the world, eagerly volunteered their assistance to aid the alien race. The benefits to our own world hovered foremost in the mind of every government official present at the meeting.
The Tah’Narians required DNA for their harvesting program. Since we couldn’t duplicate their technology, those males who were to participate had to be transported to their world, which, of course, triggered all sorts of questions from people. If these aliens were so advanced, why couldn’t they extract the needed DNA? Why did humans have to be taken off-world? The story had more holes in it than Swiss cheese.
After about a week of this, a press release from our government stated that the two strands of DNA were too fragile to be frozen and transported through space. The release claimed that the nucleobases—the four molecules  that form the genetic building blocks of DNA—would be damaged and might even disintegrate once the alien starships jumped to star drive, the method used to travel through time and space so quickly. People, however, could be protected in ways that extracted DNA couldn’t.
Agreements were reached with each government—and boy, didn’t that take a while—that these men would be returned to Earth once the program was completed. Here in the United States a lottery system was set up, and each young man between the ages of twenty-three and twenty-eight was assigned a number. Once a year, for the next five years, numbers would be drawn and a new set of one thousand men would be collected and escorted to holding centers.
Medical and psychological tests would be run on the subjects, and, if they passed the tests, they’d be transported to waiting spaceships. Other industrialized nations followed our example and set up their own lottery systems. Word soon leaked that only gay men were being targeted, but our government vehemently denied this accusation.
The media coined the expression ‘The Harvest’ for the times when the Tah’Narians would return to collect these young men. I was seventeen when the aliens first appeared, so my parents assumed I was safe. The final collection would be done before I turned twenty-three. I didn’t fall within the guidelines the aliens had established, so I thought I had nothing to fear.
I was wrong.
My name is Dale Michaels. A simple name, right? Nothing very memorable about it, that’s for sure. Or about me, either. I’m just a regular guy with average looks, a loving family who didn’t care I was gay, and good friends.
Just a guy.
Little did I know just how special I was to one Tah’Narian spaceship captain named Keyno Shou, or how he would change my life. *shakes head* Don’t think he swept me off my feet. He didn’t. What he did do was have me harvested below the agreed age limit, take me from my family, mutate my DNA so I could have kids, tell me I have a deadly disease, claim me as his mate, and destroy the life I knew.
I was not happy, to say the least. Pissed didn’t even cover what I felt. But what’s a guy to do on a spaceship orbiting Earth surrounded by a bunch of aliens with technology far more advanced than ours?
While I was still trying to figure out what to do or how to handle the attraction I have for Keyno, a bunch of men who were harvested revolted and tried to take over Keyno’s ship… and I got to see how deeply Keyno cared for me. I also met the person who staged the rebellion, the infamous gang leader, Colt 45.
And that was just the beginning of what was to come, lol. This is the beginning of my story; a story that’s action-packed, emotionally tough, and truly is the love of a lifetime.

Blurb:
In the year 2050, humanity finds out they are indeed not alone.

Massive space ships appear without warning above the capital cities of all major nations. The planet Tah'Nar is dying. Chemical warfare has reduced the once-intersexed warrior race to sterility. They need fresh DNA in order to reproduce and have an idea for a harvesting program... and so they turn to Earth.

Earth governments negotiate a lottery, and Dale Michael assumes he's safe since he's under the Harvest age limit. How wrong he is. He's illegally harvested and claimed by Tah'Narian starship captain Keyno Shou. From the moment Keyno sees Dale, he knows he must claim the spirited human male for his own. What he doesn’t expect is a spitfire with a mind of his own—and a deadly disease that will require a risky procedure to cure.

Excerpt:
“Where the hell am I?” Soft sheets rubbed against my bare skin as I sat in the bed. My heart picked up speed. This wasn’t good, really not good. I was all alone and in a bed, someone’s personal bed. All sorts of horrifying images paraded through my head as to why I was there, but I wasn’t sore and there wasn’t any physical evidence, so rape wasn’t a concern. Yet. I needed to get out of the damn bed—that was top of the ‘do right-fucking-now list’. And God help me, I needed to get dressed—why offer up an easy target, after all?—and find a weapon.
I had worked up a good head of steam when another door in the room slid open. There stood the same Tah’Narian from before. Now that I wasn’t loopy from whatever they gave me, I remembered that these aliens had deeply tanned skin and were damn well tall. I wasn’t exactly small—I stood an inch or two over of six feet and weighed two hundred pounds—but most of them were bigger and taller than me, including this one. He had to be over six feet five inches of densely packed muscle—and my ass was still in bed.
“Dale, you're awake. Excellent.”
The white-haired Tah’Narian slowly advanced into the bedroom with me, his movements cautious. My mouth fell open. Of all the things I had expected, and I had built up a horrible list, this wasn’t one of them. My nerves actually settled down to just jumping madly.
“I-I can understand you. But how…? Why…? Um, what do I call you? Who are you? Why am I here? I shouldn’t be here. Ah, and where exactly is here? And what the hell am I doing in bed?” Okay, maybe I shouldn’t have pointed out that last one.
“Please stay calm, Dale. I mean you no harm. My name is Keyno Landium Shou. I think it’ll be easier for you to call me Keyno. Let’s start with the easiest thing first. While you were asleep, a translator was surgically implanted in your brain.” He walked farther into the room. “It translates over ten thousand known languages.”
“You… you… you... put something in my head?” That was his idea of easy things first? My hand shot up to my head, fearfully searching for an incision as I watched him.
“There is no incision. We have medical equipment that can regenerate tissue and leave no scar. I have a mirror if you’d like to see, check and make sure there is no scar.” He reached for a drawer by the bed.
Suddenly it struck me why he was so familiar with this room. This was his room, his bed—and here I was, sitting in it unclothed and completely at his mercy. Fear slammed into me again as the implications of that sunk in.
“God, this is your room, isn’t it? Oh, please don’t—” Shaking, I pulled the sheet up to my chin. It wasn’t much of a barrier, but it was all I had. “Please don’t hurt me.”
“I won’t hurt you.” Keyno froze by the bed, horror showing on his face. “Dale, never would I hurt you. You’re safe with me, understand?”
I didn’t answer, just stared at him, unsure what to say or what to do. He called this safe? What was his idea of safe, anyway? Bet it differed from mine. Maybe he needed to switch channels on that communication thingy.
“Okay.” Keyno took a deep breath when I didn’t answer. “Why don’t we just… tell you what. Would you like something to eat or drink? You’ve been asleep for nearly twelve hours.”
Was he kidding me? Eat? Anything I put in my stomach was going to make a reappearance. “Can I get dressed? I don’t have... all my clothes are... Jesus.” I wanted out of his bed, the sooner the better.
I huddled beneath the sheets, terrified of this creature that had overseen me being forcibly questioned and who had admitted to sticking stuff in my brain, suspicious, and more than a little angry. Why was he acting so nice and concerned? I had no reason to believe he was nice. Was this a trap? Was he trying to trick me for some reason? That guard had told me that I’d been chosen, and I’d been harvested illegally. Then the human doctor had told me that this alien had called me ‘my chosen’.
I had put two and two together and didn’t like what I’d come up with. I had many questions I needed answers to, but I didn’t know which one to start with and wasn’t sure I could hold on to my temper. Then there was the little problem of stark raving fear. But one thing I knew for sure—I wanted to be dressed. Sitting here naked had me at a distinct disadvantage.

Author bio:
M.A. Church lives in the southern United States and spent many years in the elementary education sector. She is married to her high school sweetheart and they have two children. Her hobbies are gardening, walking, attending flea markets, watching professional football, racing, and spending time with her family on the lake.
But her most beloved hobby is reading. From an early age, she can remember hunting for books at the library. Later nonhuman and science fiction genres captured her attention and drew her into the worlds the authors had created. But always at the back of her mind was the thought that one day, when the kids were older and she had more time, she would write a book.
By sheer chance she stumbled across a gay male romance story on the web and was hooked. A new world opened up and she fell in love. Thus the journey started. When not writing or researching, she enjoys reading the latest erotic and mainstream romance novels. 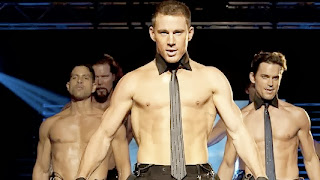