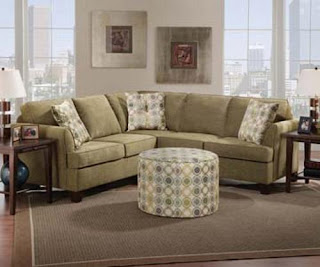 Good morning Pender, thanks for joining me so early! Let's just move into the den, shall we, while I grab us something to drink. Pender's going to talk to us today about her thing for brown eyes. Why don't you get started, I'll be right back.

Hi Julie, thanks for having me.
The Eyes Have It
I’ve always had a thing for brown eyes. The first crush I ever had was on a neighborhood boy with soft, brown eyes. I think almost every story I’ve ever written has a character with brown eyes.
Recently I had to take a flight on a DASH 8, a small prop plane. As small planes go this is a big one, seating about fifty passengers. I like flying and I’d done this particular trip many times without incident.
But something unexpected happened on this flight.
As I entered the plane, the flight stewardess directed me to my seat. Horror of horrors, I had to sit in one of two seats right at the front of the plane. That wouldn’t be bad, I don’t really care where I sit, but these seats face the wrong way. I had to sit facing the back of the plane, just like the flight stewardess.
I’d have to make eye contact with the other passengers, particularly the passenger sitting facing me. Since I’m a bit of an introvert this was slightly unnerving. I was one of the first to board the plane and as the other passengers boarded I scanned them trying to figure out who I’d be tangling feet with.
One of the last passengers to board was the man assigned the empty seat facing me. There might have been other people boarding after him, but once he sat down I stopped looking at anyone else.
He was just a normal-looking guy, but he had the most beautiful eyes I’ve ever seen. I often write about eyes like that but I’ve never seen them outside my imagination.
I spent the next forty minutes sneaking peeks at him as he stared out of the window. He didn’t seem to notice me watching him. We never even made eye contact, but I couldn’t stop looking at his long black lashes and expressive brown eyes. I couldn’t quite decide on the color. I wished he’d glanced over at me just once so I could have seen if they were dark chocolate or a rich mahogany.
I’m sure I’ll never see him again and I don’t usually use photos or real people to create my characters, but those eyes were inspiring. 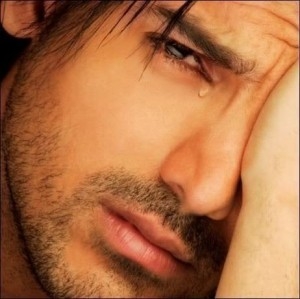 A day or two later I was poking around the M/M Romance group on Goodreads.
They’re putting together a free anthology called Hot July Days. (They did a similar anthology called Stuff My Stocking, back in December.)
Readers can submit a photo and/or write a “Dear Author” letter for a photo. Then an author chooses one of the photos and writes a story using the photo and letter as inspiration.
I was browsing through the photos and letters when I saw a photo that was perfect for me.
It’s the face of a man: A beautiful man with black hair and big, gorgeous brown eyes. One side of his face is covered with his hand and he has a tear in his visible eye. They’re not quite as pretty as the eyes of the man on the plane, but that story is mine.
I’m not sure exactly what I’ll write yet. The letter to the author suggests he’s been sitting outside a hospital door, looking sad. I do know that he will be with someone and the story will have a happy ending
So now I should wrap up this blog and write a happy ever after for my sad, beautiful man.
Pender Mackie has been writing M/M romance stories for three years but Scent of Attraction is the first submitted for publication. She’s busy putting the final touches on several others. 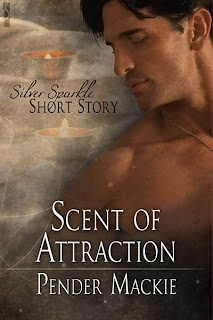 Scent of Attraction
Blurb
When Shawn takes a job at a cologne counter in a busy department store he hopes it’s the beginning of a successful career in the health and beauty industry.
But almost two years later Shawn is frustrated with his job and his love life. He’s still working the cologne counter, still single and still spending every night alone.
His job allows him to meet plenty of good-looking men but most of them are straight, and even when they aren't, Shawn is shy. He gets nervous and tongue-tied when he’s around a hot guy and the thought of going on a date with a complete stranger makes his stomach churn nervously.
When he meets friendly and outgoing Graham the attraction on both sides is intense and immediate.
Shawn might be willing to step out of his comfort zone this time, but there’s just one problem. Graham's already with someone else.
It looks like their relationship is over before they even share a kiss...
For an excerpt of Scent of Attraction visit: http://silverpublishing.info/product_book_info/new-release-c-1/scent-of-attraction-p-261
You can visit me at:
http://pendermackie.blogspot.com
Posted by Julie Lynn Hayes at 7:29 AM