The Glades is Back - Fighting the Re-Run Blues

When I wasn't watching television for the space of a few years I didn't notice it so much, but now that I am watching a few shows, I do - summertime is basically devoid of new entertainment, most of the series have packed up and gone of (hopefully) to film new ones. In a short space of time, I lost The Borgias, Justified, Vampire Diaries, and Hawaii 5-0 and am about to lose Top Chef Masters after the season finale tomorrow night. There is, of course, Netflix, to help fill the breach, as well as series we either own or get from the library. I'm currently watching Top Chef Season 5, QAF Season 3 and on instant watch I have Beauty and the Beast, Xena, Spartacus and Thirtysomething, depending on what I'm in the mood for. Sarah and I are watching Six Feet Under (just finished season 3), Dexter (season 2), DaVinci's Inquest (season 1) - and hopefully will start season 2 of True Blood and season 1 of Burn Notice soon.

But in the good news department, The Glades is back on A&E, and that is something that makes me very happy. I loved it from the moment I first started watching it, when it premiered last year, and I was overjoyed that it was renewed for its second season. 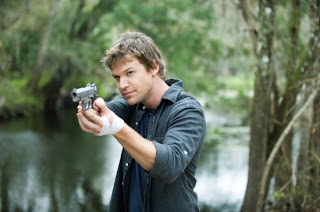 The Glades is the story of police detective Jim Longworth (Matt Passmore) who emigrates from Chicago to Miami for reasons that are a bit personal. During the first season we met his co-workers, Carlos and Daniel, and the lovely lady who became his love interest Callie Cargill (Kiele Sanchez). Callie is a single mother whose husband is in prison. This season begins with Ray Cargill getting out and , as if that isn't bad enough, Jim's boss puts the smackdown on their relationship because of Ray being a witness, therefore his wife is somehow offlimits. It doesn't help that Ray is living not far away, and his son wants to see him all the time - and he is being on his best behavior. We'll see how long that lasts. I'll grant him one thing, he has more charm and personality than Rita's husband Paul, in Dexter. The second season is off to a great start, after only two episodes, and another monkey wrench has been thrown into the works in the form of Jim's ex-partner from Chicago (and I do mean partner in more than one sense). I predict that tensions are going to rise as the season progresses. I just hope that Jim and Callie come through it all intact, as I really like them together. 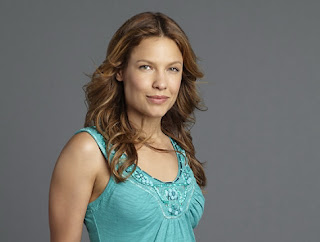 I cannot say enough about the Glades - the writing is edgy and good, the acting is great, the plots are great, and the locales? They make me want to visit that part of Florida, even though I've been farther north and not been impressed. The Glades looks like a much more interesting part of the state, one I'd be willing to visit. I have to say that it's been a while since A&E did something to make me take notice, and I used to watch it a lot. But they've got my attention back now with The Glades - I hope they keep up the good work, and add more stuff to their schedule that I'd like to see. 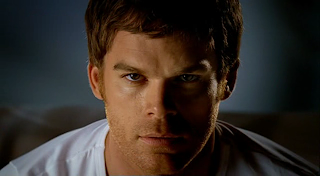 Okay, Dexter. Watching Season 2. Yeah, I know, we're way behind. And it's different than the books, which I've read all of. Not that I don't like the series, I just wonder at some of the differences. But I won't go into that right now. So Lila. Who else thinks she's ten kinds of crazy, raise your hand? I sure do. I was uncertain about her from the time Dexter first met her at his twelve step meeting, and I was really unhappy that they became involved. First of all, I don't see it. Dexter has never been about the sex, not even with Rita; that's why she was so perfect for him, cause she didn't want it either, damaged from her marriage (and face it, her mother, played very well by Jobeth Williams, is also a nutso). So why Lila? She isn't even attractive. And the more we see of her, the more the rest comes out - she is not firing on all eight cylinders, for sure. But when she did what she did in the last episode we watched - she gave Dexter's mother's killer his address, and broke into Rita's house because she thought Dexter was there - well, she deserves no mercy, and I hope none is shown. I loved it when Dexter told her that if she wasn't careful she'd see the monster. I hope she does. I think we're almost done with season 2. Well, four episodes left, close.   I've already let myself be spoiled for further on in the season. All I'll say is it's quite the departure from the books, we'll see how it plays out. Also see what the departure of Julie Benz (aka Mrs. Michael C Hall) from his life will do to both her character, Deb, Dex's sister, and their onscreen relationship.

Today I re-watched Scary Movie. Haven't seen that in a long time. Going to watch them all, and Scream too. Funny movie with parodies of lots of other films. I wouldn't have recognized Anna Faris if I hadn't looked it up on IMDB - I'm used to her as a blonde now, I think. I saw her in House Bunny, I thought it was really cute and funny. 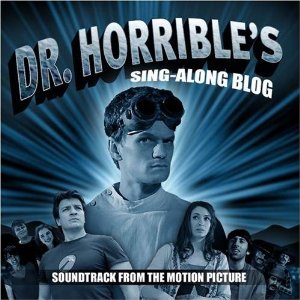 Sarah and I just watched Doctor Horrible's Sing Along Blog for the first time - it was fabulous!  Neal Patrick Harris - whom I'm discovering more and more how much I like - is wanna be villain Dr. Horrible. Nathan Fillion is his nemesis The Hammer. Felicia Day is Penny, the girl at the laundromat that he adores but dare not speak to.

It's only 43 minutes long, but it's 43 minutes filled with fun and song and intensity. If you don't love Dr. Horrible after those 43 minutes, I have to question your judgment.

I recommend this film highly. You'll love it. 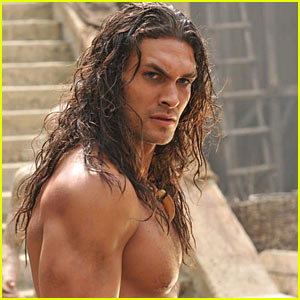 For those who don't know it, a new version of Conan the Barbarian is coming out in August, starring Jason Momoa. The only reason I know who he is is because I have two friends who adore him - Sui and Ann. Which is cool, cause he's a hot guy. And I've become interested in watching the movie now, if I can. Depends on financial considerations at the time.

I have also begun playing, thanks to Ann's wonderful influence, Age of Conan. It's a mmo game. Currently certain things are available only to paid players, but it is my understanding, from Ann, that soon the whole thing will be free. So far (and I'm not that far, because frankly I'm not necessarily the best at this) I'm enjoying it.

I chose to play a barbarian, he's Cimmerian, like Conan. It's similar in ways to WoW, but not others. It's the differences I have to get used to. I died the first time from not realizing how to fight. lol I could read the manual first, but what fun is that? I like it, and I look forward to a lot of hours of fun, when I can fit them in.

Well, I have writing to get back to - I'm working on my entry for Hot July Days for the m/m group at Good Reads; I have a second Forbidden to write, and the next Captivations, and I am working on something with co-author SL Danielson, Leaving His Mark, which is going well, and something with Sui Lynn that I'll talk more about later.

Have any thoughts on the things I'm watching? Or do you have shows of your own you'd like to discuss? I'd love to hear it!

Email ThisBlogThis!Share to TwitterShare to FacebookShare to Pinterest
Labels: conan the barbarian, dexter, the glades