I'm doing something new today. New to me, that is, not new to a lot of the other participants. It's called Six Sentence Sundays. It's where a number of writes post six sentences from an upcoming release or WIP, to give you a taste of what's coming. So I'm posting six sentences from a WIP of mine which will be released on the fourth Friday in June, the 24th to be exactly. It's from the second chapter of my Forbidden series. (The cover is from the first one, as I don't have the second yet). Forbidden is set in the future, 2056 AD, and things have changed a little bit. Priests are allowed to marry, but homosexuality is not allowed. Although Jerico James is not one to follow the rules.

In other news, my friend Sui Lynn was interviewed by Top2Bottom Reviews - you can read that here. Be sure to stop by and say hello, leave her a comment. Finally, at noon EST, you'll be able to find us on Beth Wylde's Yahoo group here. We'll be talking about our writing, including a joint writing project we recently started, and we'll be running contests and giving away prizes. Come by and see us!

Okay, so here you go - my first Six Sentence Sunday. This is a scene between Jerico and Father Sergio.  I hope you enjoy! 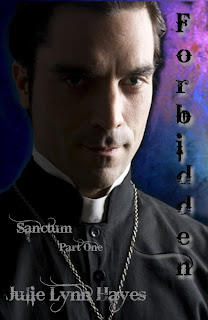 “So, when are you going to handcuff me?” he asked.


“Handcuff you?” Sergio laughed again. “Why would I even think about handcuffing you?”


“Prisoner? I wouldn’t necessarily use that word.”


Here is the complete list of participating authors, be sure and visit them. Six Sentence Sunday


Thanks for stopping by, have a great Sunday!
♥ Julie.

Posted by Julie Lynn Hayes at 8:26 AM