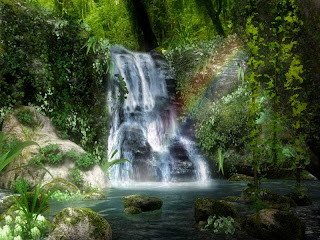 Today I'm being joined by my good friend Erin Gajdos. I met Erin while working at a convention called BishieCon. She's going to talk about a series that she really loves, called Mon Colle Knights. We're sitting by a waterfall, sipping our tea. Thanks for being here, Erin!


I was a big fan of Fox Box back in the day. One of my favorite animes was Mon Colle Knights. I was so upset when they stopped just short of finishing the series. For those of you who don't know, Mon Colle Knights, also known as Six Gates far Away Mon Colle Knight or Rokumon Tengai Mon Kore Naito, is a series by Hitoshi Yasuda and Group SNE. The story revolves around a card game in a way. It's nothing like 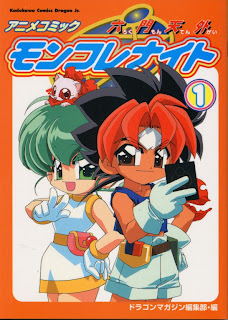 Yugioh though, so don't expect actual card battles. Instead you get monster fights. The plot revolves around a boy named Mondo and his girlfriend Rockna, along with the Professor Hiragii, who visit Mon World and fight with monsters against Prince Eccentro and his lackies; Glucko and Batch. They both have the same goal though, to unite Mon World and the Human World. Hiragii thinks the monsters will be useful to humans, and that they can be friends. Prince Eccentro simply wants world domination, like most villians. In order to unite both worlds, special Monster Items are needed. The collection process is what the anime is all about, though it occasionally goes off on tangents. It's both cute, and comical.   The thing that bothers me, besides it being stopped early, is that now you cannot have access to the dub. It's almost impossible to find all the episodes. I have maybe 1-19, and a sparse few others, out of over fifty episodes. But you can't even find Japanese episodes subbed either. It's hard enough to find the japanese DVDs without subs also, and they are worth about 70 dollars per DVD or more. It's completely unfair! And on top of that, I can't find the manga either. Anyway, that's my little rant on Mon Colle Knights. Sorry so short! <3 Erin Gajdos
Thanks for being here Erin!
Please feel free to leave a comment or a question for Erin!  Thanks for stopping by, have a great weekend!
♥ Julie
Posted by Julie Lynn Hayes at 10:28 AM