No More One More Question - a Farewell to Peter Falk 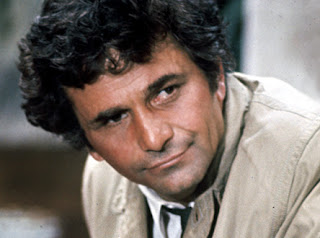 I suspect most of you will remember Peter Falk primarily as the detective Columbo, in his infamous wrinkled trenchcoat, and his ever present cigar.  I remember when the show first came out, many years ago - and yes, I know I'm dating myself. It was part of a group of series that was presented on NBC and rotated one per week. The others were MacMillan and wife (with Rock Hudson and Susan St. James), McCloud (with Dennis Weaver), and I believe the fourth was The Psychiatrist, maybe with Lloyd Bridge, but my memory fails me  there. Columbo was an awesome series. He always solved his cases, and he was quite the character. He was particularly known for what became a trademark line - he'd be just about to leave the suspect, lulled into thinking they'd gotten away with the crime, when he'd pause in the doorway, using his cigar to punctuate his words, and he'd begin. "One more question. There's something that's been bothering me...." And then he'd proceed to solve the crime, based on that tickle in the back of his head.

Peter has left us, as I'm sure you know by know. He was 83, and is survived by his longtime wife Shera Danese, whom he met during the shooting of Columbo, and who has the distinction of being a primary character in more episodes than anyone else. I was surprised to learn that she is only 7 years older than I am, which puts a good 20 years between them. From everything I've ever read, it was a happy marriage.

You might also remember Peter, for those a little younger, from The Princess Bride, as the grandfather who reads the story to a young Fred Savage. My memory goes back farther though - he was the baker in Castle Keep, with Burt Lancaster and Patrick O'Neal - keeping the bakery and the baker's wife safe from German occupation. And he was in some damn funny comedies.  He was the psychiatirst in Penelope, with Natalie Wood. 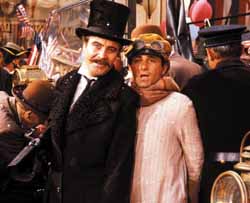 One of my favorite of his roles was as Jack Lemmon's bumbling sidekick in The Great Race.  That movie is so hilarious, it never fails to make me laugh. Tony Curtis, Jack Lemmon (as Professor Fate), Peter, Natalie Wood, Keenan Wynn and more. The relationship between Jack and Peter always reminded me of the old Dastardly and Muttley cartoons - a sort of Mutt and Jeff duo. 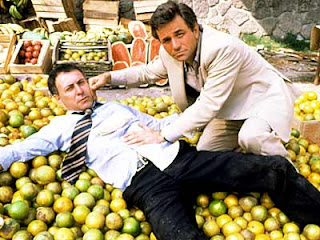 I also remember Peter with Alan Arkin in the great comedy The In-laws. I believe it was remade, but I haven't seen that. I saw the original at the theater with my little brother Doug, and loved it.  It's zany and off-beat and full of twists and surprises. I'll never forget the scene where Peter teaches Alan to zigzag across an area, in order not to be shot. A classic.


I'll always remember Peter fondly. I can't help but smile when I think of him. He was a truly fine actor, and a warm person. He will be missed.  Rest in peace, Peter.
Posted by Julie Lynn Hayes at 11:34 AM