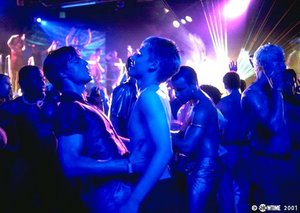 Today, welcome if you will my very good friend and talented author Sui Lynn! She's the author of some very delicious yaoi romance novels, and a series about Gargoyles. More about those later, but first, I dared her to take my infamous Rick Reed questions and she rose to the challenge!  Sui, have a seat and tell them what you said, while I get us a couple of Mimosas.  Hey, I think I see Brian and Justin, wave to them!

The Questions
1)      You’re marooned on a small island with one person and one item of your choice—who is that person and what item do you have?
Who’s with me… well I’d have to say Jason Momoa. The man is hot, beautiful sex on a stick. As for one item… I think the item would be a bottomless box of adult toys. Yes we may die of starvation and dehydration, but damn we’d have fun while it lasted.
2)      Which musical would you say best exemplifies your life – and which character in that musical are you?
I’d have to say ‘Seven Brides for Seven Brothers’ and I’m the preacher’s wife. Why you ask… well because there are so many beautiful young men running around singing and dancing and having a great time and all I can do is watch. But I’m definitely going to enjoy the show while it lasts.
3)      Take these three words and give me a 100 word or less scenario using them:  ivy, starlight, dramatized
He sits on the wall listening intently to the plans going on around him. No-one has seen him yet as he curls under the ivy. The starlight filters through a nearby window… they are planning on murder, they are planning on domination, they are planning a garden club fiesta. He watches as they act out their plan, dramatized for his convenience as he doesn’t speak the same language, he can only guess what’s being said. One of the many hazards and problems with being a fly on the wall. Benny Buzzybee, Fly PI.
4)      You’ve just been let loose in the world of fiction, with permission to do anyone you want. Who do you fuck first and why?
So many choices… I think I’d have to choose Professor Moriarty. The man was devious, intelligent and a true bad boy. I think he would make one hell of a lover… if you can pry him off of Holmes. LOL.
5)      What is your idea of how to spend romantic time with your significant other?
Personal romance for me is easy. I don’t require a lot. I’m a cuddler, so a night by a roaring fire in the arms of my main squeeze is all I need. Now nice music, candle light, flowers, and forethought are always a plus but sometimes just being held, snuggled close on the sofa is all that’s needed for a little romance.
6)      When you start a new story, do you begin with a character, or a plot?
Character. I’d have to say 99% of the time it’s a character with a story to tell. The character appears first and then he tells me his story.
7)      If they were to make the story of your life into a movie, who should play you?
Betty White. Because the woman is a complete gas… If anyone can make my life interesting it would be her.
8)      Who’s your favorite horror villain and why?
I guess it would be Hannibal Lecter. Nobody enjoys a good liver like he does.
9)      Do you have an historical crush and if so, who is it?
I can’t say I have any historical crushes. Reality has never been my thing. LOL.
10)   Is there a story that you’d like to tell but you think the world isn’t ready to receive it?
Unfortunately I don’t believe a majority of the world is ready for anything I write. Fear and ignorance are incredibly powerful things. As much as we’d like to believe we are an educated society that values everyone and accepts their beliefs regardless of what they are, we have proven over and over that is not the case. People hate and attack anything that is outside their experience or what doesn’t fit in their box of what they consider normal. I don’t write what most people would consider ‘normal’ and I pray to god I never do… how boring would that be. I write what I hope some will enjoy, fully knowing that not everyone will understand or even like what I write. That’s okay with me. I just hope that maybe one person will pick it one of my stories and be surprised enough to maybe open their eyes just a little bit to a larger world around them in a positive way. 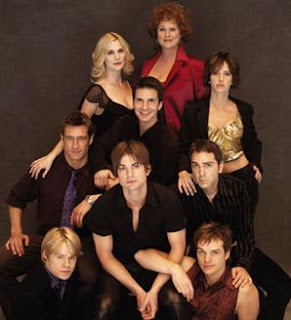 Hey, look, the gang's all here!
I first met Sui when we were both young Dreamspinner authors, and I read the blurb for her novel Blue Rose. It intrigued me so much that I simply had to read it. I loved it, and I wrote to the author. From that correspondence, a friendship began. 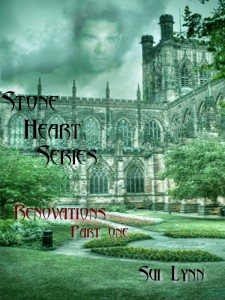 Since then, Sui has begun a series at Wicked Nights called Stone Heart, about gargoyles, which I love, about a man who is escaping a past abuse and finds his future in the depths of an old church which he renovates. 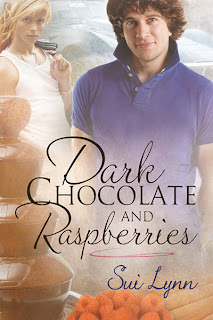 Sui is also published with Silver Publishing. Her first book there was Dark Chocolate and Raspberries, which I shall be reviewing shortly. Let me just say that it's a lovely story about young love and music and healing.   Here's a little taste of that: 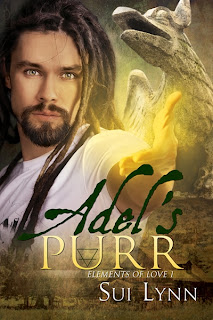 Coming up in July, also with Silver, is the first in Sui's series, Elements of Love. It's called Adel's Purr and it takes place in a future when the church has all the authority, and many things are not allowed. But love can still prevail, even if it's not what you expected. This is also about gargoyles, and I love it!
Blurb
Evan Hallvard is a stone mason, like his father before him. In a world struggling to recover from a war that swept humanity to the brink, Evan struggles to learn about and control a power he knows nothing about. He can create and awaken 'living stone', gargoyles. When he receives a message from his contacts that a large gargoyle is about to be destroyed by the Church, Evan rushes to save it.
Adel has been asleep for centuries; this century -- with its mechanical devices and human beings set on their own destruction -- holds no interest for him. Yet, through the haze of his hibernation, he hears a voice calling to him, needing him. When he awakens, he is restrained by those he is sworn to protect. Struggling does him no good, and he is about to close his eyes on a world that no longer wants him, when he hears that voice calling again. Calming, soothing, it draws him forth, softening his stone heart like no other ever has.   Between the evil that hunts Evan and the Church that wants Adel destroyed, will the two be able to find love, wrapped up in Adel's Purr?
As I've mentioned here before, Sui and I will be hosting Sci Fi Sunday on our blogs, beginning July 10th, and we are co-writing a sci fi story which we hope you enjoy!
Have any questions for Sui? Any comments? She'll be glad to answer them!
Thanks so much for being here, Sui!
♥  Julie
Posted by Julie Lynn Hayes at 11:04 AM