Please welcome author M Garnet, who is here to talk about her newest release, A Master Trade.

Bio:
My full name is Muriel Garnet Yantiss and I started writing years ago under the pen name of M. Garnet, but I really only got serious after I retired.
After raising a daughter, running an International Business, traveling the world, and only finding time to write a few minutes in any twenty-four hour period, I now am in Florida and can write all day and all night, which I often do.  I use all the experiences I gained, and without any hesitation, draw information from my long list of friends and acquaintances worldwide.
With over 30 books published through two active publishers, and a couple of independent books (indies) at Amazon, I love the email that the Internet brings me from all over the world.
I write SciFi, Fantasy, and Contemporary Mystery.  But I like my stories to end happy ever after.
Visit my web site at www.mgarnet.com to see other books I’ve written. I love to hear from you at mgarnet2@yahoo.com. 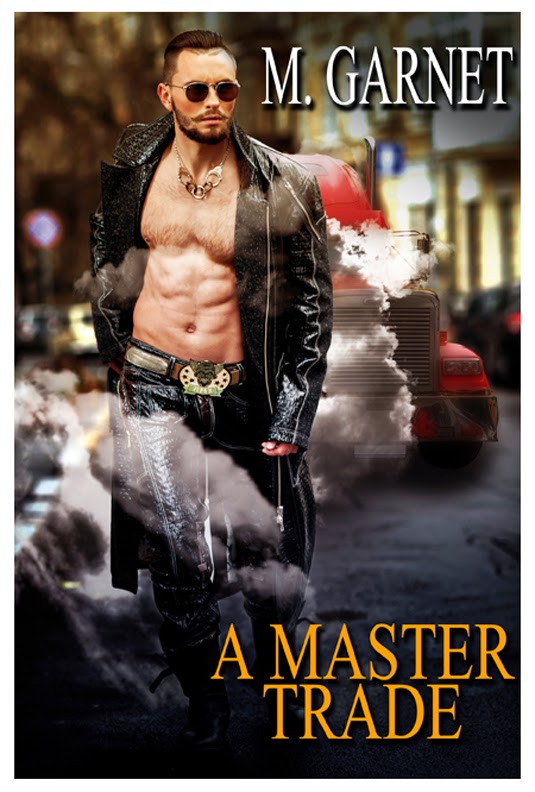 When a big rig truck goes missing from the large company she works for, she never thought she would get caught covering a crime for her only living relative. How was she to know she had signed her life in trade to the Master?
Margaret had lost everything and everyone in a terrible accident as a child, except for a younger cousin. She took care of this boy and did everything to protect him, including committing a crime that could put her in a Federal Pen.
The man who caught her, now owned her for five years, a man she knew and hated. But she would do anything to protect her cousin, including joining into a different world that circled around a blue whip.

Excerpt:
People were leaving, talking in awe and respect about the effects of the Master. She looked down and even though the spotlight was off, she saw the young man releasing the girl and the older man taking the girl into his arms. The girl immediately wrapped her arms around his neck and clung to him. The Mistress had Margaret moving out with everyone else.
She was trying to understand what she had seen. Not the pain and the mishandling of a beautiful girl, but the girl’s reaction to it and to her older friend.
Suddenly she saw the hallway full of people and she drew back. It hadn’t been bad coming in with only the woman, but she was unable to go out in that tight dark space with all these bodies. Suddenly someone bumped her from behind and she twisted around. There were bodies everywhere and she couldn’t see. It was darker and the walls were closing in and she couldn’t breathe. She knew that Mistress Deb was saying something, but she was just one more dark body in the tight quarters. Margaret felt the ceiling closing down.
Margaret closed her eyes and put her hands over her head to protect herself from the falling debris, curling herself into the smallest space possible to avoid the smoke and dust and she cried. Margaret let the tears roll down and she held her head and banged it against her knees. There were voices all around, but they never found her. They found the others and continued the search, but they never found her.
Then suddenly someone found her. Strong arms were around her, lifting her, pulling her against a wide chest. She was safe. She wrapped her arms around a thick neck and buried her face in a leather coat and rocked comfortably in the motion of a moving body. Margaret was found.

Recent Release at New Concepts is SLAVE OF THE BLUE GHOST and the link is http://www.newconceptspublishing.com/products/slave-of-the-blue-ghost
A SciFi where the slave rules the owner and knows his secrets.