A last farewell to Raylan and Justified

Well, it's over, and it was certainly great fun while it lasted. Lots of great characters. But would you expect any less from an Elmore Leonard story?And now Elmore has passed, and Justified has concluded.

I always knew Raylan and Boyd would come face to face again, and they did. If you watched the 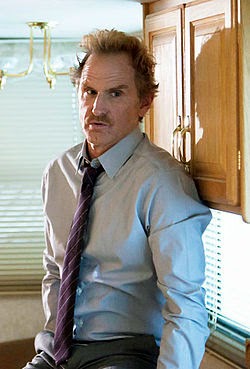 episode before this, you know Ava shot Boyd and took the money, and Boyd and Avery - and every one else, including Raylan, whose CI she was - were after her. Well, not Wynn Duffy. You know, at the beginning I didn't care for him a whole lot. He came in to the story with Winona's no-account husband, whose name I've already forgotten, and he was rather sleazy. But he's grown on me, and I'm glad Mikey saved him, and sorry Mikey died.

Raylan has been hung up on his ex, Winona, since the series started. But that didn't stop him from getting involved with Ava Crowder, in her pre-Boyd days. This was back when Boyd's daddy was around, Bo Crowder, and he wasn't a very nice man. But Raylan's love for Winona won out, he dumped Ava and went back to her. And then she disappeared on him. Not surprising, considering Natalie Zea was also in Californication and The Following.  Toward the end of the series, Raylan decides to move to Florida, to be a part of his baby daughter's life - and Winona's. But things keep holding him in Harlabn County. I still expected them to get together at the end, but that didn't happen, although Raylan is in his daughter's life, as we see in a scene that takes place a few years after the end.

Okay, then, just because of a chance photograph (the FBI still searching for Ava, of course, although Avery Markham is long dead), Raylan knows where she is and goes to see her. She fears he is going to take her back to prison, and she finally agrees to show him something - or someone, actually - but only after he swears that Boyd can never know (Boyd is in prison, where Raylan put him, rather than kill him). Apparently Ava had Boyd's child, a son she named Zachariah, after the only man who never wanted anything from her, her late uncle. So Raylan promises, secure in the knowledge she will do no harm. I have to wonder if he'll go to visit her now and then?

Finally, Boy and Raylan. Raylan goes to visit Boyd at the prison, where we discover that he has gone back to preaching the word. He is told he has a visitor, and finds Raylan waiting to see him. They talk, and in the end, it all comes down to one thing - they dug coal together. 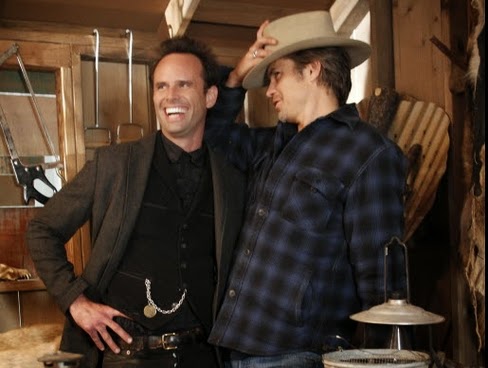