And then there were five... 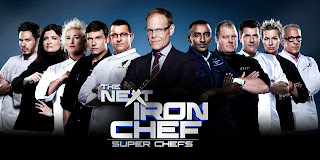 Last week we saw the depature of Chef Marcus Samuelsson on Next Iron Chef. The battle has gotten really serious when chefs of his caliber are being sent out the door.  **Spoilers ahead***. It's no longer a matter of being removed for making mistakes, it's become a matter of the smallest difference in quality among these chefs, and it's only going to get harder, the closer each one gets to the prize - becoming the next Iron Chef.

Last night's challenge, devised in the devious mind of the Chairman, was all about Risk. For this challenge, the five chefs were taken to an auction house, and there they were to bid on ingredients. But the coin with which they were to bid was not currency, but time. They big how long they would take to cook the ingredient. Four ingredients were up for auction. The fifth was to go to the last chef, who would get five minutes less than the least time bid for the others. Bidding began at one hour.

Chef Falkner won tuna jerky, Chef Burrell sardines, Chef Chiarello lobster, Chef Zakarian wagu beef and Chef Guarnaschelli ended up with the last item, to be done in 20 minutes - a leg of lamb!  As winner of the previous contest, Chef Burrell had an unnamed advantage, which was not revealed until they finished cooking - she became the fourth judge on the panel. As such, she tasted all the dishes, and wrote down the name of the chef she felt should go to the secret ingredient showdown on a card, which wasn't revealed right away.

Then the regular judges did their thing, tasting all the dishes. At this time it was revealed that the name on the card was.... Chef Zakarian! If not for that, the other three judges would have sent him through easily, as only Chef Falkner and her tuna jerky ranked higher. They then chose the second chef, who would cook against Geoffrey - and it was Anne! Karma bit her squarely in the ass there! I'm sure she didn't plan on having to cook against him, but rather saw it as a way of ridding herself of a very fierce competitor. They were given panko and another Japanese ingredient, whose name escapes me, but one with a citrusy savory flavor - and told to make dessert!  A tall order indeed.   Geoffrey made souffles and Anne ice cream. 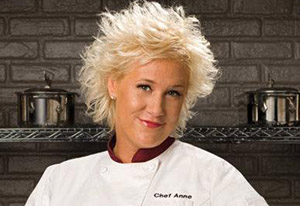 And Anne was eliminated.  Wow. I hadn't seen that coming. I was very upset to see them competing  together. I like them both, and I'd thought Anne had a good shot at being next Iron Chef. I didn't want to see Geoffrey eliminated, though. It was a very  nerve wracking challenge, and a good how. Next week, it looks like the four remaining chefs will be cooking on the docks - literally. I think two will be eliminated at that time. Wow. That would leave only one show after that.

Things are certainly heating up here, can't wait to see what happens. Personally, I'd like to see Chefs Falkner and Chiarello eliminated next week and Chefs Zakarian and Guarnaschelli cook head to head for the title. Only time will tell!
Posted by Julie Lynn Hayes at 11:00 AM