Double Eliminations, a Birth, and more (Many spoilers)

There were four standing - Chefs Zakarian, Falkner, Guarnaschelli and Chiarello. And the night would hold a double elimination in the battle to become the next Iron Chef.  *****spoilers********The four chefs were taken to the exclusive area of the Hamptons - playpen of the rich and famous - set down on the docks with a budget and instructions to make three dishes. Chef Falkner had the advantage and a headstart. One chef would win the challenge and go straight to the finale. The chef on bottom would go home. And the other two would have a secret ingredient challenge to determine which would go to the finale. 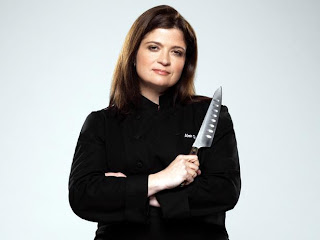 Chef Zakarian secured the first spot, knocking it out of the ballpark with his winning recipes. Unfortunately, we had to say good-bye to Chef Guarnaschelli. I'd hoped to see Alex and Geoffrey in the last showdown; it wasn't mean to be. So Chefs Falkner and Chiarello met in a head to head. The secret ingredients were crackers and wine. What Chiarello came up with looked nasty, to be honest. I wasn't sorry to see him eliminated. Now it's Geoffrey and Elizabeth in the head to head final showdown next Sunday. Of course I'm rooting for Geoffrey. As I said before, he'll bring a definite touch of class to Iron Chef. If he wins, I'll definitely watch it on a more regular basis. 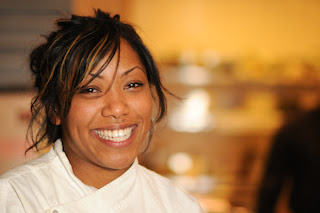 Last night was Top Chef Texas, which also contained a double elimination. First the quickfire challenge in which the chefs chose a type of Don Julio tequila to cook with and made a dish, pairing liquor and food. The winner received $5000. Then came the elimination challenge, in which chefs were paired up according to who they were standing by, and each pair received a game meat to cook. Unfortunately, Heather and Bev ended up together. Bev is a control freak who doesn't seem to get much done, focusing on small tasks, although she was stoutly defended by some of the chefs as a hard worker but I haven't seen much evidence of that yet. Heather, while just in some of her criticisms, was also a bit of a bitch about things. It's amazing they didn't shoot each other down, but somehow they managed to survive. The winners of this challenge were Edward and Ty. So far, Edward is one of my favorites. I also like Chris Jones. The losing pair were Nyesa and Dakota, basically because Dakota's meat wasn't cooked nearly enough and Nyesha hadn't checked on her until it was too late. I only recently became aware of Nyesa, and the fact that I should have recognized her sooner - she was the winner of the executive chef position at the Wilshire in LA, as shown on Chef Hunter. I've seen that episode at least three times, and never made the connection. Alas, too little too late. 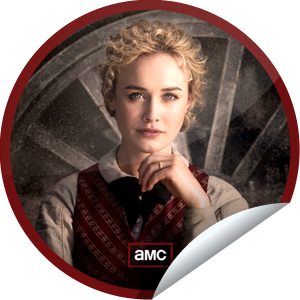 So, Hell on Wheels. This is an unexpected gem in the AMC line up. I like it even better than I do The Walking Dead, which is on hiatus til February. It's a rich panoply of life in post Civil War America, involving the building of the Transcontinental Railroad. In last week's episode, Cullan and Elam were pitted against one another in a show of fisticuffs, one aimed to divert attention from the lack of a payroll. Elam won, but only because someone *coughIrishbrothercough* doctored Elam's gloves with pepper juice which got into Cullen's eyes. When Cullen mentioned it in this week's episode - not angry, but rather with admiration for his tactic - Elam denied it. Durant is having financial difficulties, and if he doesn't fulfill his part of the contract, he stands to lose quite a bit of money. He is thwarted by his lack of maps pertaining to the Rocky Mountains - he needs them badly, and Mrs. Bell is holding out for what she feels is a fair price - what he owed her late husband. In the newest episode, we see a father and a son and their respective beliefs clash, as the Indians are invited to Hell on Wheels to discuss being relocated to a reservation. I love Colm Meaney, he's awesome as Durant, and Anson Mount is easy on the eyes as Cullen Bohannon. This is a must see series. 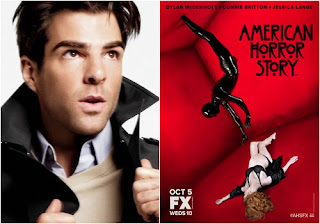 American Horror Story - just wow. This is a great show. Haven't seen anything like this in years. Last week,  as you'll recall, Ben realized that his wife wasn't lying about being raped, and he arranged for her to be released from the insane asylum he had her committed to. Funny thing - she's only six months pregnant, but she seems much farther along. That's because one of the twins is growing at a phenomenal rate - and starving its sibling in the process. Last week we learned the shocking truth about Violet - she actually overdosed and she's dead. Now she can never leave, any more than the others can. When Dad tries to drag her to the asylum to see Mom, she refuses, and of course his dragging her to the car doesn't do any good - she can't leave the grounds. Chad and his bf are preparing for the big event, to Constance's chagrin, who tells them they can have Dr. Harmon's baby, but to leave her grandchild alone. Hayden wants the children too, and so does Nora Montgomery. Vivian refuses to set foot in the house, but she goes into labor in the car, with dire results. One child is stillborn, and Constance whisks the other away right after he's born - and Vivien bleeds out (Dr. Montgomery is the attending physician). Now she and Violet can be ghosts together. This series just keeps on getting better!

All for now. Person of Interest tonight, and Chef Hunter. More about Once Upon a Time next time, Restaurant Impossible and Mystery Diners. This weekend is Bishie Con so I won't be around much. But tomorrow is another day.