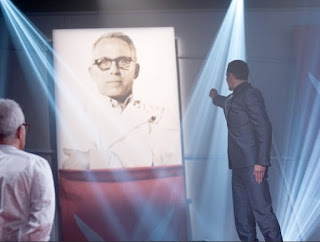 On Christmas night, the newest Iron Chef took the stage in Kitchen Stadium for his first battle, pitted against Chef Victor Casanova at Culina at the Four Seasons in Beverly Hills. The secret ingredient they were given was fresh brook trout.


Of the three judges selected for this battle, I found two of them to be obnoxious, particularly the guy, whose name I've forgotten. The woman was from one of those Real Housewives reality shows which I wouldn't watch, afraid they'd somehow lower my IQ. 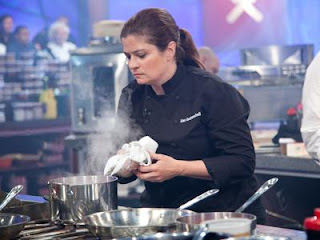 It was an interesting battle, watching the two chefs and their different techniques. Do you even need to ask which chef I was rooting for? I didn't think so. I especially loved that he got Chef Alex Guaranaschelli as his sous chef! How awesome is that? They make a great pair. I hope that she's his sous chef all the time when he cooks in Kitchen Stadium.

Watching them work together was great. They remind me of Nick and Nora Charles in their back and forth banter.He'd ask her about a dish, she'd give him her report, and then tell him to wait and not do what he was going to do. And he'd agree! 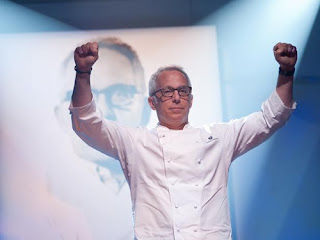 When it came time to present the dishes to the Chairman and the judges, the challenger went first. His first course was a trout crudo which was not very well received, but the rest of his dishes were. Alton had speculated that Casanova was going to make trout ice cream, but luckily that did not materialize. That just sounds very wrong! Then Geoffrey presented his and I knew he'd won by their reactions. Sure enough, when the scores were totaled, Geoffrey's cuisine reigned supreme! Not only that, he received a perfect score! I don't think I've ever seen that done before. Kudos to Chef Zakarian for a magnificent entree into the Iron Chef pantheon. I have to think that he will receive challenges from many chefs who will try to best him because of his perfect score. It was a great first battle. I will definitely watch Iron Chef all the time now.

Last night, I received a blast from the past. I was going to go to bed, but for some reason, I saw at the TV and pressed the Guide to look for Food Network (why, I don't know, I was tired and it was late). What did I find but a new channel I'd never heard of called NuVo, and they'd just started showing an episode of NYPD Blue, which was to be followed by one of Hill Street Blues. How could I resist? I couldn't! I thoroughly enjoyed both shows. In the first one, Sipowicz was partnered with Bobby Simone (Jimmy Smits). Last seen, Jimmy was busy being Dexter's bestest new buddy. He's looking mighty fine, then and now. In HSB, I got to see everyone. Sargeant Esterhaz had his beloved Buick stolen and it was later found in a chopshop. Henry was pissed that he got passed over for promotion - again - and ended up on an assignment which led to his being shot, and then yelled at in the hospital by his wife. Everyone seemed to be coming to Frank to say they quit - quite the hectic episode. I loved it!

Not much going on otherwise, most programs being on hiatus. There'll be a new Hell on Wheels Sunday. Next month Justified comes back and Alcatraz starts. I plan on watching that, will let you know what I think.