Good morning and Happy Steampunk Sunday! Yesterday, Sarah and I went to see Hugo at the theater. Let me tell you about it! 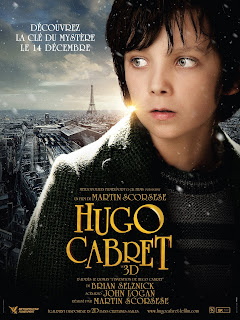 Hugo
Director/Studio/Author: Martin Scorsese/GK Films/John Logan
American release date: November 23, 2011
Format, Genre and length: Theatrical Release/Fantasy/127 minutes
Publisher/Industry Age Rating: PG (for mild thematic material, some action/peril and smoking)
Overall Personal Rating: ★★★★★
At the age of twelve, life is difficult for Hugo Cabret (Asa Butterfield), and all he is allowed to see of it is what he spies from behind the scenes of the clockworks in the Paris train station. Taken in by his drunk uncle (Ray Winstone) on the death of his inventor father (Jude Law), Hugo is stripped of everything he’s known, including school, and friends, and forced to work, keeping the clocks running. All that remains of his father is an automaton, and a notebook filled with his notes. In order to fix the automaton, which his father had been in the processing of restoring before his death, Hugo steals parts from the toy store in the station, that is owned and operated by the crotchety Ben Kingsley. When he catches Hugo stealing from him, he takes the notebook away from him and threatens to burn it.
Synopsis:
A desperate Hugo goes to the man’s house, where he enlists the aid of his goddaughter Isabella (Chloë Grace Moretz). He bravely approaches George and strikes a deal with him—he’ll work around the shop to make up for what he’s stolen, and maybe he’ll give him the notebook back. He’s still going to take care of the clocks, as his uncle has disappeared, and he knows what happens to orphaned children who are caught by the Station Inspector (Sacha Baron Cohen)—they end up in an orphanage!
Solving the mystery of how to fix the automaton draws Hugo and Isabella into a greater mystery, one that might lead to dire consequences, as he tries to cling to his father’s legacy.
Commentary:
Right off the bat, let me say—bring Kleenex. If you’re like me, you’ll need it. This might be considered a children’s film, but it’s of interest to all ages, as evidenced by the various age groups of the people in the theater. It’s a beautifully done film, and even though the pace isn’t breakneck, and almost slow at times, it most certainly works. Asa Butterfield did a wonderful job as Hugo. I last saw him in The Boy in the Striped Pyjamas, another tearjerker. Sacha Baron Cohen as the Station Inspector was wonderful. During the course of the film, he spends a lot of time chasing after Hugo, along with his Doberman Pinscher Maximillian, determined to catch him. He’s as stiff as his leg, which is encased in a mechanical device, courtesy of the Great War. He has a crush on the flower girl (Emily Mortimer) at the station, and doesn’t know how to talk to her, but receives advice from Madame Emilie (Frances de la Tour of Harry Potter fame, Madame Maxine). Also from the Harry Potter films is Richard Griffiths (Harry’s Uncle Vernon), who would like to get to know Madame Emilie, but her dog seems to have taken a dislike to him.
Look for Christopher Lee as a kindly book store owner as well. I’d know him anywhere by his voice, and I have to say he’s looking great. Speaking of books, pick up the book by Brian Selznick.
Hugo was produced by Johnny Depp; it has quite the pedigree. The look of the film is amazing. It has a definite steampunk feel to it. The special effects are wonderfully done. This is sure to become a classic, and well worth acquiring on DVD when it comes out. In the meantime, go see it at the theater to get the total experience. I did not see it in 3D, by the way, so cannot comment on that.
Til next time, take care!