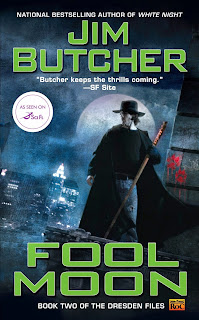 Harry Dresden, wizard PI, depends on the Chicago PD for most of what income he manages to make, and when his contact/sortof friend, Karrin Murphy, fails to call for a few months, things get lean. So when Kim Delaney invites him to dinner at McAnally’s wizard pub, his stomach tells him to go. But what Kim wants, he isn’t willing to give, fearing she’ll get in over her head, and reasoning it’s for her own good.

To his surprise, after Kim leaves, Murphy shows up and requests his presence at the scene of a crime. The scene is so gruesome, Harry almost loses his free dinner. Before Harry can put his thoughts together on the situation, everybody’s favorite Federal agents make an appearance, and handily eject both Harry and Murphy from the scene.

Harry has some ideas about what might have killed the victims, but he has research to do, and the relationship between him and Murphy ain’t what it used to be.  So forgive Harry if he doesn’t tell her about the lead he’s going to follow. Well, two can play that game.

When he least needs it to, things go awry, and suddenly Harry finds himself at odds with Murphy, and she won’t even listen long enough for him to say he’s not guilty of what she thinks he is. Can things get any worse?

It’s a toss-up as to who will get to Harry first—Murphy, the FBI, the werewolves, or a player to be named? He has to draw on all his wizardly strength and knowledge just to stay in the game.

I loved the second book in the series. Fast-paced and very intense. Especially if you like werewolves.  Jim Butcher obviously knows his stuff, as he builds his alternate take on Chicago, in a world where supernatural creatures not only exist, they walk among us.

One of the things I really like about Harry Dresden is his humanity. He’s not perfect, far from it, and he’s capable of being an asshole. He gets hurt. And he fucks up. But underneath it all, he’s a good guy, and a great character. Really enjoying these, look forward to reading more.
Posted by Julie Lynn Hayes at 12:01 AM