I have to admit I am a relative newcomer to reading manga and yaoi and m/m romance compared to many authors. And I blame it all on my daughters. They encouraged me to read what I considered to be strange-looking graphic novels/mangas that were written funny and read even funnier. From back to front? Right to left? I'll admit that at first I couldn't do it and gave up. But they never gave up on me, and encouraged me and I finally got the hang of it.

I think my first yaoi was Antique Bakery. It's a very cute and very sweet story. I began to read more and more, and one day my Sarah sent me an email about going to Yaoi Con. I'm like - it's in San Francisco! (We're in St. Louis). Way too expensive. Then she sends me another email about a local convention, BishieCon. Well, that was better, so I checked it out and discovered that volunteers got money off their badges, but staff got in for free! I conferred with Sarah and we decided to become staff, so I emailed the con chair, and the rest is history. We became BishieCon staff members and worked both of the conventions - 2009 and 2010. In 2011 there was not a full convention, but rather a one day affair, which was not the same, and there is no Bishie Con now. But I met some nice people, including authors Katrina Strauss and Jessica Freely, as well as talented artist Amelie Belcher, and Dreamspinner Press (who published my first book, To The Max).

Ah, m/m romance, the other side of the yaoi coin. Where yaoi is graphic and like reading a comic, m/m romance are books mostly by women for women about men who love men. I never set out to write a m/m romance, per se, but there was this character talking in my  head who wanted to be heard - Max Montague - and his story just happened to become a m/m romance, To The Max, followed by the sequel, For Love of Max (number three is in the works even now - A Time For Max). 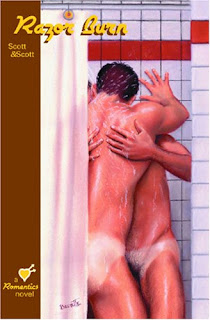 Not only do I write m/m romance, but I read it too, and I've met many friends in the writing community. I want to briefly discuss two authors who have written some of the best romance novels ever - collectively they are known as the Romentics, Scott & Scott, and they are a real life couple. They have several books that they published themselves, and I think Loose Id has re-released them with new covers. I bought mine from Amazon, so I have the original covers, and I love them to death. One of the best - my favorite m/m story of all time, I think - is Razor Burn. I can read this over and over and never tire of it, and it never fails to make me cry. It's moving, it's thrilling, it's romantic, sweet, and so much more. One of these days, I'll review it. But seriously, this story moves me in so many ways - I should have such a gift!

Now, to the contest! At the end of the Blog Hop, I shall be giving away three copies of anything on my backlist. The rules are simple - follow this blog, leave an email address, and tell me what yaoi or m/m romance you like to read and why. Whether it's your favorite or not, share with us! You have until midnight Sunday to enter! Now don't forget to check out all the other authors in the Blog Hop! And most importantly, have fun!