Gordon Ramsey's Back Where He Belongs - in the Kitchen and on my Television! 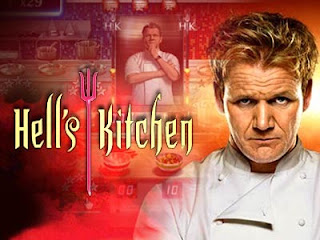 Last night I watched the return of two shows I really enjoy, and they both happen to feature Chef Gordon Ramsey - Hell's Kitchen, in its tenth season, and Master Chef. They'll be on again tonight, and that's where I'll be too. 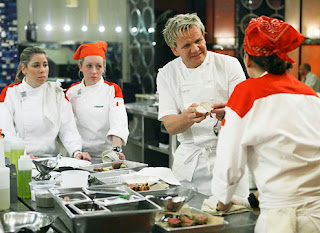 They say this season of Hell's Kitchen is going to be very intense, and from I saw last night, I can see why. They're revving up the chefs and encouraging violent actions and reactions. I think we'll see a lot of yelling this year, and a lot of stupid mistakes.

As usual, the chefs were divided into two teams - male and female, red team and blue team. They began by making their signature dishes, at Chef's bequest, and then comparing them two by two. The women scored the first victory, and were sent off for barbecue cooked by two previous season winners, while the angry men were left to scrub the kitchen. 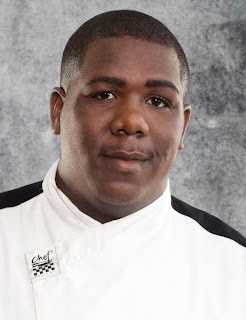 At dinner service that night, no one did themselves proud, and stupid mistakes were made. The women could not get the Beef Wellington right, but at least they got through the appetizers, the men never did, before a disgusted Chef Ramsey closed their kitchen, and then closed the Red Kitchen. Several chefs were told to get out over the course of the evening, including one very short woman whose name I forget, who could not cook the scallops right. On the men's side, though, their scallops were horribly butchered in preparation by a 22 year old executive chef named Tavon. When it came time to put up two men for elimination, some wanted to put up both prep chefs, Tavon and Royce, but some argued that Royce was worth keeping so they wanted to put up Don, whose only crime was looking clueless as he never got a chance to cook, dinner service being called off before the entrees. Chef Ramsey saw through their subterfuge and turned down Don in favor of Royce. But in the end it was Tavon that was eliminated. 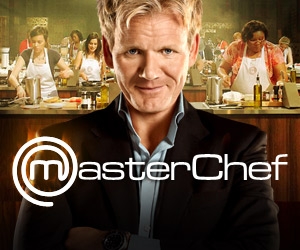 On Master Chef, it was the first night of eliminations, of seeing who made the cut to be on the show among the many contestants, who all were to cook one dish, and then finish it before the judges in 5 minutes. There were some very strange and off the wall contestants, including some woman who kept dancing, and another who made cakes with the three judges heads (she made it in, the dancer did not).

There was an 18 year old high school student who made carrot cake. She was bright and bubbly, but Gordon told her to come back next year. There were a few contestants that I liked.and some I wasn't sure of. Right now, names and faces don't stand out, but I'm sure that will change over the course of the season. Gordon's co-judges were back with him - Graham and Joe. I think Graham lost weight, probably a result of being on the Fat Chef series. The most unusual contestant was a blind woman, the first for Master Chef. I question whether she'll be able to carry out the various challenges that will be required of her, but that remains to be seen. Tonight will come more eliminations, more giving out of the white Master Chef apron. The previews look promising - one guy rides in on a horse. I have to wonder if some of that isn't as staged as the opening of Hell's Kitchen where the sous chef demanded that the chefs shave their heads, as he did eight years before, to show their commitment to Chef Ramsey. That turned out to be a hoax. The woman sous chef wore a skull cap, and the two "chefs" who had their hair shaved were actually not chefs, but friends of the sous chef. Good television, even if an illusion. 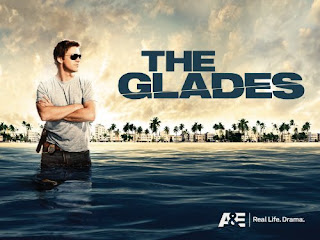 Season 3 of the Glades started Sunday on A&E, and I was thrilled to death! I love this show so much! And if the first episode of the new season is any indication, we're in for another good one. Jim and Callie are dating openly - hooray! - but on the downside, Callie is unemployed and jobs are hard to find, but she doesn't want Jim to say or do anything about it. A young couple doing some canoodling in their car in a deserted spot see strange lights, followed by loss of power in their vehicle as well as their cell phones, and while chasing the lights they  make a gruesome discovery - a dead body. Investigating the death leads Jim and Carlos to a group of victims of alien abduction. The victim was a supporter of the group. He left behind a very young, nubile widow, who stands to inherit his sixty million dollars. This episode was a lot of fun, and Daniel got a chance to show as the resident expert on strange and esoteric things, such as alien abductions. 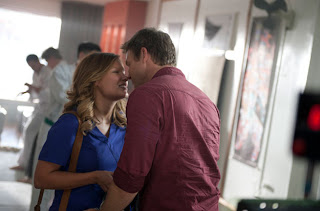 I can't say enough good things about this show, I'm glad I took a chance and began to watch it. It's funny, upbeat, quirky, and the mysteries and police cases are well done and interesting. The characters are real, and fun to watch. I hope it stays with us for a long time to come. 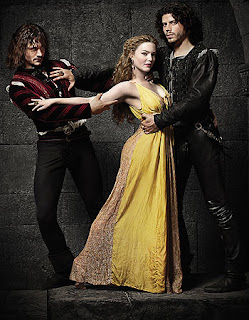 Only two episodes of the Borgias left. I love this rich historical drama even more than I did the Tudors, and that's saying a lot. In Sunday's episode, Cesare runs across Caterina Sforza's son, believed to be dead, and learns the true story of the siege of Forli, which is certainly not the pack of lies that his brother Juan fed their father, the Pope. Of course, Juan has other problems - wounded at the siege, the physician says he may lose his leg, and his disposition is not helped by the fact that he's also got syphilis, and is bound to go mad over time, at least. Lucrezia is being pressured into marriage, but the trouble is no one has caught her eye, and she really doesn't care for the condition of being married. But then she sees someone who pleases her - unfortuantely, he is not the groom to be, but his brother. But her mother gives her some sage advice - "You're a Borgia. You can have what you want." So she agrees to marry the one, while cuckolding him before the marriage has even been performed, with his brother.

Meanwhile, Savanarola is still causing all sorts of trouble, and general consensus is he must be silenced. And naturally, Della Rovere is bent on no good. He's been training a young boy, with the aid of poison, to kill the Pope. Now that the boy has a tolerance for it, he is ready to become the Pope's food taster. The trouble is that position is already filled. No problem - a gentle push, and whoops, there's a vacancy in the Pope's household. 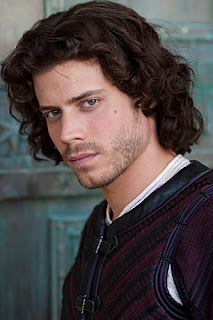 When the Pope asks Cesare if he'd been allowed to set aside his eclesiastical robe and assume command of the Papal army, would the outcome have been different at the Siege of Forli? To which Cesare replies that he would have remained until the end, an obvious dig at his brother, although at this point they didn't realize Juan had run from the battle, like a coward. Or that he tortured Sforza's son. In his turn, Juan accuses Cesare of having knowledge of the surprise attack that trapped him and his men, which Cesare denies. I see these two coming to a head at some point. My money is on Cesare, cause he's dead sexy, and a hell of a lot smarter than Juan.

Still watching Chopped and Restaurant Impossible and Sweet Genius. I'm going to start watching a show on Cooking Channel, Baron Ambrosia, but not until Sarah gets back from Indiana, so I'm recording it for now. I've started watching Ouran High School Host Club, which I'm enjoying, and plan to watch both seasons of Black Butler. And I found out Beelzebub is on Crunchyroll, so I'll watch that too when I can.

That's it for now, got lots to do - editing and writing, and rping. Job hunting.