Good morning! Please welcome author Gardner Browning to Full Moon Dreaming! He is here to discuss his latest release, Karma City. Gardner will be awarding a $25 Amazon/BN GC to one randomly drawn commenter during the tour. The more you comment, the better your chances of winning. To find the other stops on his tour, go here. Don't forget to look for the Rafflecopter at the end of this post! 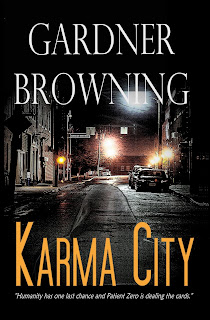 A microscopic parasite has crippled humanity with night terrors and paralyzing anxiety. In this world of increasing dystopia, hope yet remains in Karma City. But when mercenary drifter, Jameson Shoals, learns that a famous scientist has created a stronger parasite to kill the original, it isn’t until the bodies litter the streets that he realizes the horrifying truth: the new parasite is a killer with a mind of its own, and upon dominating Patient Zero, this killer acquires legs, hands, and eyes. It falls upon Shoals and his partner, a deadly female mercenary, to stop PZ and his mob before they can overcome and supplant humankind.

Jameson Shoals crouched to keep his balance atop the speeding train. The wind beat against his leather jacket, scattering his collar length, brunet hair over his eyes like a frayed, muddy rag. The scalding steam and smoke puffing from the locomotive singed his nostrils. Raising his shotgun at the attacker standing only a few feet away, he shouted, “You’re in a real heap of shit, pal.”

The man glared at Jameson, with blond hair framing his gaunt face like tendrils of fire . His
spindly legs backed to the edge of the train car roof with unnatural balance. “You should consider your own life,” he hissed. Amber light burned in the man’s hollow, jack-o-lantern eyes. “Detonation is imminent.”

Before Jameson could shoot, the man leapt from the train, flipping backward and vanishing into the night.

Gardner Michael Browning is an award-winning author and professional wrestler. In addition to receiving a New Hampshire Literary Award, two of his novels were part of an international English literacy program for middle grade readers. Browning enjoys classic literature, fishing, playing guitar and spending time with his family.

The book will be on sale for $0.99.
~~~~~~~~~~~~~
From a Game to a Novel
Before I wrote the first draft of Karma City and its sequel (not yet published), I tested the story by writing it as a Dungeons and Dragons campaign! I developed the setting, stakes and antagonist, then gathered a group of my closest friends and had them make up characters. For nine months, I facilitated the story as the Game Master (or GM) and my friends role-played their way through Karma City, defeating the villain and saving the world! It was a powerful and collective story telling experience that allowed me to really build the world and get a chance to “live” the story with them. The characters that exist in the pages now are a direct result of their combined creativity and the love of those game nights.

Preparing the story took some research. I interviewed parasitologists and vaccine developers to understand how to design and write about my fictional parasite, “Malady.”
Doing your homework is critical for any writer.

If you have science in your story, you have to talk to experts and read work in the field you’re writing about. Understand the technology. Understand how stuff works. Immerse yourself in it and be fascinated. If possible, visit places that are like your setting. You may find you don’t need to go far to get in touch with your imagination.

I believe that a good book is one with a setting (a world) that is alive around the characters. The characters should be affected by the world around them as much as possible. In big ways and in small ways. Examples: If an explosion occurs a few blocks away, they need to feel the ground shake, hear the screams, be afraid, concerned and confused. Maybe injured by a frantic mob. If it’s cold outside, the characters need to warm their hands with their breath, scrape the ice off their windshield, or even twist an ankle on the slippery sidewalk. If it’s raining, the windows are fogged, they can’t see through their eye glasses, their shoes are soaked and their attitude sucks.

By taking my story concept into a game format and allowing others to imagine with me, the characters became genuinely unique, the world crackled with energy, and the antagonist fought to stay ahead of the heroes making the conflict rich and the stakes dire.

Readers of Karma City will feel the life on the pages because of the collaborative storytelling that served as the foundation of the story.