Good morning! Please welcome author Virginia Crow to Full Moon Dreaming! She is here to talk about her new release, Beneath Black Clouds & White. Virginia will be awarding a paperback copy of Beneath Black Clouds & White (international giveaway) to one randomly drawn commenter via Rafflecopter. The more you comment, the better your chances of winning! To find the other stops on Virginia's tour, go here. Don't forget to look for the Rafflecopter at the end of this post!

Beneath Black Clouds and White
by Virginia Crow 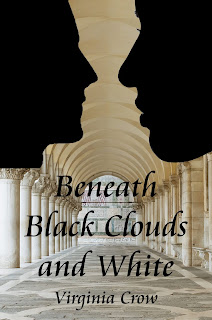 Accompanied by his wife to Flanders, Josiah Tenterchilt meets a man who could not be more different from him: an apprentice surgeon named Henry Fotherby. As these two men pursue their own actions, fate and the careful connivance of a mysterious individual will push them together for the rest of their lives.

But it is a tumultuous time, and the French revolutionaries are not the only ones who pose a threat. The two gentlemen must find their place in a world where the constraints of social class are inescapable, and ‘slavery or abolition’ are the words on everyone’s lips.

Beneath Black Clouds and White is the prequel to Day's Dying Glory.

“Henry, you saved so many lives, but some men are beyond curing.”

“No, it was not that.” He turned to face his uncle once more. “He was court martialled and shot.”

“Good lord, Henry,” he said quickly. “Whatever for?”

“And you defended him?” His uncle scowled up at him and shook his head. “Do you want the revolution here in England? King George may struggle with himself but that is no reason to guillotine him.”

“I defended him because he was wronged,” Fotherby replied, as calmly as he could. “He was not able to consider his actions.”

“Bring that into Wanderford Hall.”

“What do you mean?” Fotherby whispered, staring at the man before him.

“I tolerated your engagement to a woman of no birth and no money. I accepted her and her father into this house. But you cannot take the daughter of such a man and make her the mistress of Wanderford Hall.”

“It is not your house to tell me what I can and cannot do. I say that Miss Simmons shall be a fine mistress of Wanderford Hall. How can you judge a woman on the actions of her father? I should not care to think that I were judged on your actions simply because I am your nephew.” 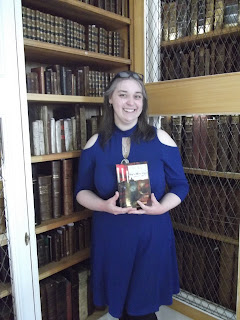 Virginia grew up in Orkney, using the breath-taking scenery to fuel her imagination and the writing fire within her. Her favourite genres to write are fantasy and historical fiction, sometimes mixing the two together such as her soon-to-be-serialised books "Caledon". She enjoys swashbuckling stories such as the Three Musketeers by Alexandre Dumas and is still waiting for a screen adaption that lives up to the film!

When she's not writing, Virginia is a music teacher in Caithness. She believes wholeheartedly in the power of music, especially as a tool of inspiration. She also helps out with the John o' Groats Book Festival which has just celebrated its 2nd year. Hopefully they'll be plenty more to come!


Hi! Would you tell us a little bit about yourself?

Hello! My name’s Virginia Crow, and I’m pleased, excited and grateful to be invited to share a bit about my books and my writing with you.  Or, as they say where my family’s from: I’m reet chuffed!  I’m below half the age of my life expectancy, so whatever anyone says,  think I’m still young!  Writing historical fiction was not at all what I thought I’d be doing when I grew up.  For years I wanted to be a paleontologist – before the Jurassic Park film came out! – and any story I wrote when I was growing up was either high fantasy or ghost stories.  So, seven years ago, when I started writing (what was to be) my first published book, it was a surprise to find it was in the historical fiction genre.


Do you have anything you would like to say to your readers?
Thank you for your support.  I value each and every one of you, and just hope you enjoy the books’ journeys as much in the reading as I did in the writing.

What do you do when you are not writing?
I’m a self-employed music teacher, so music is a big thing for me.  I’m usually either making or listening to it.  Otherwise, I try to turn my hand to as many different crafts as possible.  Every summer I enter the “Industrial Section” of the County Show.  Traditionally this tent was an opportunity for farmers’ wives to show the skills and crafts they exercised while their husbands worked the land.  Nowadays anyone can enter.  I’ve got a special love of knitting and visual art, and always try to enter these crafts even if I don’t enter any of the others.  [I’m not a farmer’s wife, by the way!]

Do you write an outline before starting a book or just write?
I do write an outline, but it is a very vague one.  I used to write books completely out of synch, but then I realised that I was never going back to fill in the missing chapters.  And if I didn’t want to write them, why on earth would a reader want to read them?  A complete change of style ensued and I started writing chronologically, and then I realised that I was incorporating dozens of subplots which just *happened*.  My books then took on a believable aspect, because life is not about one storyline or event, it’s about a whole host of them.

Can you tell us, in your own words not the book description, a little about your book?
Beneath Black Clouds and White is a book on several levels.  Sure, it’s got a complex and intricate storyline – which I’m pretty proud of! – but it’s also readable on so many levels.  You know when you’re given a book at school and told to find what the author was saying without saying it?  And you make something up just to get the number of marks you need to pass?  Well, this one has no need to make things up.  There are obvious overtones of social discontent, and the book deals with the world at one of the occasions when there’s been a massive change of opinion and global forces.  Nowadays we can look back with hindsight and say, with 100% surety, that these changes were for the better.  But at the time it was frightening for people to try and achieve these ideals, and people had to be daring and brave if they wanted to join the abolitionist movement.  I think the book puts humanity at the heart of this debate and looks at the fear and frailty of both sides.

Where can we purchase this book?
Everywhere! There is a PoD system set up for paperbacks, so all you have to do is ask your local bookstore and they can have it printed for you.
It’s also available via the publisher’s website www.crowvus.com
If you’re after the eBook, you can find it at Crowvus, Kobo, Amazon and Smashwords

What is the hardest part of writing in your opinion?
Having the time!  Because of the nature of my job, I work in the afternoons and evenings which means my main writing time is in the morning.  The only problem is, for me writing is an immersive art, and waking up into the “real world” to do my job, can be quite difficult.  There are some books, or parts of books, I knew I would have to write at a different time.
On one occasion, I can remember walking Orlando (our dog) into town after a morning of writing.  A man came up, wanting to say hello to Orlando (who, notoriously, hates men) and I warned the gentleman not to go near Orlando.  I didn’t think anything of it until my sister started laughing at me.  Apparently, instead of using normal, modern words, I’d addressed him as someone in the Georgian period.  So, at that point I decided not to write if I knew I was going to be going out into the world afterwards!

Is there a genre that you love to read, and would like to write, but just cannot?
Children’s literature.  I recently became an auntie, and it has inspired me to rethink over all the books I loved and which inspired me as a child.  I’ve had a go at writing for children, but somehow it doesn’t seem to be quite right.  I’m not sure what I’m doing wrong, it’s just not right!  But, I’ve been practicing, and this year I managed to put together an entry for the Kelpie Prize (for children’s literature) which I’m quite pleased with.  Who knows, if they like it too, I might have cracked it after all!

Cats or dogs?
Dogs – I’m the proud owner of a Sprocker Spaniel called Orlando, and I’m under no illusions: he runs my life far more than I run his!

Do you read more than you write?
No. I’m a spectacularly picky reader – I think I annoy people with just how picky I am!  But when I find a good book I do find it difficult to
a)     stop reading
b)    stop thinking about it the whole time
I tend to feel totally bereft when I finish a good book, and I have t allow myself a mourning period before I’m ready to embark on my next literary adventure!

Why do you like hardcover/paperback more?
I don’t possess an eReader!  I don’t have a mobile – or at least not one which has been charged in the last three years – and only put the TV to good use during the Football (Soccer) World Cup and the Olympics.  I’m not exactly a technophobe because I love my laptop and lose several hours each week to Twitter.  But I love the sense of age and endurance with a book.  The oldest book in the house dates back to 1664.  It’s seen two world wars, the French Revolution, American Independence, three Jacobite uprisings, and the Great Fire of London.  Holding so much history in one (comparatively) tiny book is incredible.  I just love being a part of it.

How many paperback/hardcover books do you own?
When my parents got married they said they would never throw away a book – although they have, on occasions, given books to secondhand stalls and charity shops.  Having grown up with that attitude, 33 years worth of books have accumulated.  I have no idea how many books I have, but it’s probably closer to thousands than hundreds!