Please welcome author Russell to Full Moon Dreaming. He's here to tell us about his book, Derrick, the second book in his Gavin Nolan trilogy. Russell will be awarding a $10 Amazon/BN GC to one randomly drawn commenter via Rafflecopter. The more you comment, the better your chances of winning. To find the other stops on Russell's tour, go here. Don't forget to look for the Rafflecopter at the end of this post, as well as my review of Derrick. 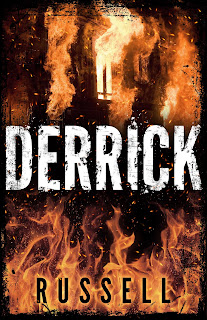 In Hyde Park, a movie theater erupts in flames on a bitterly cold November evening.

It seems like a job for the fire department, but under Captain Creighton’s direct orders, Detective Gavin Nolan and his partner, Derrick Williamson, must investigate. Arriving on the chaotic scene, they find multiple fatalities —but one of the victims is most peculiar…

Gavin soon discovers that this fire wasn’t the first of its kind. The arsonist has set ablaze other buildings around Chicago, and more female victims left in the same gruesome state have been discovered.

Gavin and Derrick determine that the arsonist is not an arsonist at all—but a sinister serial killer with an agenda.

Juggling the unexpected events in his personal life, Gavin digs into the locations of the explosions. At the same time, Derrick probes into the victims’ lives, searching for any possible connection.

However, when the next explosion occurs, the killer leaves behind a significant object, and Derrick becomes noticeably reserved. Gavin soon uncovers an enigmatic link, one that points to Derrick’s military past. A time that his partner had wished to forget. Yet, to catch the vicious maniac, Derrick must tell Gavin everything.

In a suspenseful, gripping ride to the end, it is up to Gavin to rescue his partner from the clutches of a  killer. But will he make it in time?

“Look at that.” Derrick pointed over to the front rows.

At the fifth and fourth rows in the dead center, several more CSI members were photographing two burnt corpses. The explosion blew back the bodies into a crumpled position on the chairs.

Hopefully they had a quick death. Gavin stayed silent.

Moving on, they reached the exit door near the front of the theater. Another warning from Delanie informed them of the rubble and potential structural damage in the next section. Briefly looking back, Gavin heard the crackling of radios, like eerie ghostly crickets fluttering in the distance. In the opposite direction, three firemen were still containing some smoldering chairs.

Once they passed the doorway, a series of portable lights cascaded over the area. Gavin was unable to decipher the debris, the contents of which were haphazardly pushed away from the clear epicenter near the opposite end of the room. Up above, about a third of the ceiling had disintegrated, leaving a huge hole. The cold wind invaded the space, dissipating the soot scent slightly. More CSI team members shifted diligently, gathering debris in clear evidence bags and marking each spot with photographs and red markers. Near the apparent epicenter of the blast, several firemen were discussing the area, pointing at spots.

“Have to get back to my captain,” the young fireman said. “Need anything else, just let me know.”

“Where the fuck do we begin?” Derrick grumbled.

“You can begin by bringing back that hottie,” Susan said behind them.

Gavin turned to find the doctor kneeling near a shriveled, burnt corpse. Her scalpel gingerly poked and prodded the body’s seared skull.

“Isn’t he too young for you?” Derrick returned with a snarky grin.

“Came through the back.” She looked up at him and then at Derrick. She added, “As long he’s eighteen-plus, no laws broken, baby.”

Shaking his head, Derrick snickered. One of the CSI team, an annoyed-looking woman whose gray hair probably came directly from her stressful job, shot him a glance.

Standing up and ripping off her plastic gloves, Susan said, “No offense, love you guys, but what the hell are you doing here?”

Russell has been writing for the majority of his life. Slipping into alternative universes allows him to enjoy the process of creativity from the novel’s conception to its final draft. Currently, he lives in South Texas with his wife, two kids and several cats.

DERRICK is a 2018 Winner in the New Apple Literary Awards, receiving Official Selection in Psychological Suspense.


DERRICK by Russell
I must share some exciting news with all of you!
My new book, DERRICK, just won in 2018 New Apple Literary Awards Contest as Official Selection in Psychological Suspense. I am completely surprised, flattered and humbled by the honor!
Also to add, GAVIN (Part 1 of The Gavin Nolan Trilogy) won 2017 New Apple Literary Summer E-book Awards as Official Selection in Horror.
What's the hardest part of combining genres in one book?
I have to discuss the Gavin Nolan Trilogy as a whole, and my unique writing process.  When I began writing, I truly did not know what to expect as the story begins to take hold. As I pen a new story, a beginning usually appears in my head and I start writing. In essence, I write without character descriptions, no outlines nor any research. I just let my fingers (and quite active imagination) command the ship. Because of this, the story builds momentum, meaning that I do not necessarily know what happens at the end until midway through. So if I’m surprised, my reader will feel that rush as well.
For the series, I was inspired by other authors who create dark, gritty thrillers, which borderline on horror genre. Similar to Harris’s The Silence of the Lamb and Flynn’s Gone Girl, my series heightens the intensity of the scenes, and puts the characters in perilous conditions. Echoing the likes of Clive Barker, Peter Straub and even John Connolly, I create some visceral, graphic content which some of my readers found rather disgusting still they could not help but to keep reading. Finally, I truly love interwoven plots. Perhaps, my inspiration comes from daytime soap opera that my mother used to watch in the 80s. As you will see in the Gavin Nolan Trilogy, my books are not for the light reader. I create multi-layered plots involving my man character and trickle into the secondary characters. On the surface, my series could be easily described as homicide detective novel. However, as you read my books, so much more occurs.
Needless to say, I wrote GAVIN (Part 1) with a clear intention as a stand-alone piece. However, Gavin Nolan, the protagonist, became a formidable, strong character with a several skeletons in his closet. Being stated, the secondary characters also had strong personalities which develop and push the story forward. Despite the climatic, intense ending, I realized that Gavin’s partner on the force, Derrick Williamson, had much more to say. When I completed the first draft, and began editing GAVIN, I quickly began to write DERRICK (PART 2). In a way, the story starts six months after the events of GAVIN, and the reader discover Gavin in a different point in his life. Yet, the strong friendship between Gavin and Derrick is tested by the hands of deadly madman’s agenda--something connected to Derrick’s military past. As a side note, DERRICK subtly alludes to the final book, QUINN (Part 3). Currently, I’m editing it and hopefully have it out by Spring 2020.  In fact I have a preview of QUINN at the very end of DERRICK.
Finally, GAVIN and DERRICK is for a mature audience and not for anyone under 18. I have graphic depicted violence, explore and develop strong sexual situations and include rather explicative language. If you are not dissuaded from my disclaimer, then you will absolutely love my books!
Thanks for having me today! Please follow me on Twitter and Instagram @Russell_Writer. Also, check out my website: www.RusselltheAuthor.com.
Read to Escape!
Russell

Someone in the Chicago area is killing women in a horrific manner. In an attempt to obfuscate what has been done, the bodies become part of an arson scene, probably to throw the police off the track. Detective Gavin Nolan has only recently come to terms with his sexuality, and isn’t open with his friends, family, and co-workers yet. On the other hand, his partner, Chad, has introduced him to friends and family, who have accepted Gavin with open arms. While on a date with Chad, Gavin receives a call from his partner, Derrick, to come to the Opus Theater, where a fire has occurred. When Gavin protests that they don’t do fires, Derrick snorts and tells him these are their boss, Quinn Creighton’s, orders, so they have no choice. Arriving on the scene, they try to figure out why they are there. Looking around among the victims of the fire they come across the body of a woman. Something seems different about this one.  The medical examiner thinks there is residual evidence of rope on the wrists, which has bonded with her flesh. And she appears to be nude.

The detectives don’t realize it, but this is just the tip of the iceberg. Working this case will involve digging into the past, as well as taking a good hard look at who they are, and how they got where they are now.

Derrick is the second book in a trilogy, which I didn’t realize when I agreed to review it. I was able to read this book despite that, although there were probably nuances I would have understood better had I read the first book. If you’re interested in reading this, I would suggest starting from the beginning, with Gavin.

This book is very long and complex, especially for a mystery. There are a lot of different characters, some of whom I suspect were introduced in the first book, especially Gavin’s superior, Quinn Creighton, with whom he has some kind of past history. I am guessing we meet Chad in the first book, and that their relationship was more front and center, while in this book, it’s relegated more to the sidelines. Gavin’s relationship with his partner, Derrick, is more central.  The two end up on the murder case at the theater, and are working with a female detective named Evelyn, who is actually under another jurisdiction but whose presence has been requested. Apparently her partner hasn’t bothered to train her very well, and her superior is a dick.

The author, who uses the single name Russell, is not without talent, and he creates memorable characters. The plot is interesting, even if the resolution is somewhat simplistic. What the book suffers from is a lack of good editing, however, including everything from simple word errors to stilted dialogue, which detracts from the enjoyment of the book. These are not major problems, and they could have been easily handled in the editing phase, but they weren’t. This book was obviously self-published, which doesn’t automatically mean it’s bad, but self-published authors are often notorious for either not having editing or having poor editing.

Another problem, at least for me, was when the story changed from being Gavin’s story, completely told in third person narrative, to his partner Derrick’s story, which is done in a first person POV, and goes on for some chapters. And pretty well sets up the ending, including the who-done-it. The only question is how will this play out and who will survive?

It’s an enjoyable story, and if things like the ones I mentioned don’t bother you, then go for it. There is another book left in the series, but I’m afraid it will probably suffer from the same poor editing. I don’t think I’ll be reviewing that one.