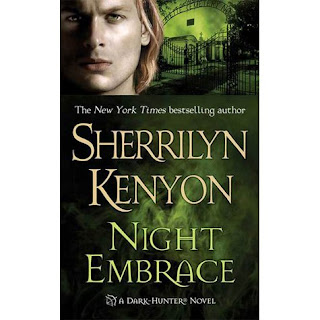 Though Mardi Gras in New Orleans is a fun time for many, for the Dark Hunters, it means a lot more work than usual. While many people descend on the city to celebrate the occasion, their presence is quite attractive to the Daimons who live to harvest their souls, in order to live another day. Acheron is forced to call in extra Dark Hunters, and he has to be careful to keep them apart for various reasons, not least of which is that too close proximity to one another tends to drain them.

Talon just knows this Mardi Gras is going to be worse than usual, and not just because of the Daimons. Since Kyrian is no longer one of them, Artemis has relocated another Hunter as a replacement, none than than Valerius, who looks just like the man who crucified Kyrian all those years ago, and won’t Kyrian and Julian both lose their minds over that when they find out? Then, Ash is bringing down the psychopath Dark Hunter from Alaska, Zarek, whom no one likes or trusts. And he’s got that whole crazy thing going on.

Talon is a loner who lives out in the bayou, with a couple of gators,  and likes it that way. Like all Dark Hunters, he has a story, of treachery and betrayal, and failure to save the sister he loved. He does his job and he does it well. But sometimes the gods have ideas of their own. Such as Talon being run down by a huge Bacchus-shaped Mardi Gras float. Luckily for him a good Samaritan spies the accident and runs to his aid.

Sunshine Runningwolf is an artist who lives above her family’s bar, after coming from a bad divorce and swearing off men. But she can’t resist helping someone in need, so against her better judgment, she takes the injured man back to her apartment, when he refuses to go to a hospital. She has no idea what she’s getting herself into.

These two are poles apart – she’s a health food fanatic with a big heart, while he considers coffee and beignets major food groups. He’s a Dark Hunter and she’s human. And yet there is something between them… something deeper than the length of their acquaintance would explain.

Something bad is going down this Mardi Gras. Can the Dark Hunters set their differences aside in order to work together to defeat it? And can two stubborn people such as Sunshine and Talon come to realize what it is they have together?

This is another great Dark Hunter book, with a really great plot, and more of the characters we love, including those we’re going to get to know better, such as Zarek and Wulf, Fang and Vane. There is more of Acheron in this book, which I’ve been wanting, and hints at someone I know is coming.  I love the glimpses we start to get into Acheron’s story, and can’t wait to read his book. We also see more of the squire Nick and meet his mother. Nick is a smart-mouthed punk who sometimes needs his ears boxed, but he serves a useful purpose, even so.

The Dark Hunter series is an intricately woven story, rich with detail and great characterization. There is never a dull moment with these books. The love scenes are both tender and sensual. Talon and Sunshine are a great couple. I swear, each Dark Hunter is sexier than the one before. I don’t know how she does it.

Highly recommend this book and look forward to the next one.
Posted by Julie Lynn Hayes at 12:01 AM