Cover Reveal: The Sceptre of Morgulan

Please welcome author Matthew D. Ryan, who is here to reveal the cover for his latest book, The Sceptre of Morgulan. Matthew will be awarding a $20 Amazon or B/N GC to one randomly drawn commenter via Rafflecopter. The more  you comment, the greater your chances of winning. To find the other stops on this tour, go here. Don't forget to look for the Rafflecopter at the end of this post.

The Sceptre of Morgulan
by Matthew D. Ryan 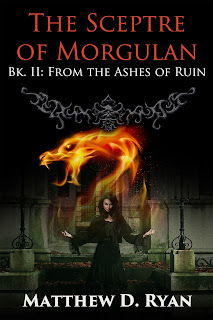 Coragan of Esperia has another job to do. Can he and his companions capture the Sceptre of Morgulan and prevent an apocalypse? Or will Korina outmaneuver them again and escape with the prize? So much hinges on the efforts of so few—if they fail in their quest, if the evil witch Korina the Black succeeds, she may gain an unrivaled power over the forces of darkness; a power she will not hesitate to use.

“Accident or no, it makes no difference,” his father said. “You’ve got to be better than that, son. You’re worthless and you’ll never amount to anything unless you straighten up.” He swung the strap again; it struck him across his shoulder blades garnering two new welts and a bloody line of damaged flesh. “I won’t have myself a worthless son.”
Again, the strap came down. Gaelan fell to his knees. The tears flowed freely now; he couldn’t stop them. He felt small and helpless, too weak to defend himself, a victim of pitiful circumstance. People often spoke of the gods, but where were they now? How could such injustice be permitted? Either the gods did not exist, or they did not care. Either way, thought of their so-called mercies did not help him. Mardikkar. Auraria. Neither one was there to stop the pain. He struggled to his feet.
Weak. Helpless. Weak. Helpless. The words formed a grim incantation in his mind. Something to focus on. Something to fight against.
I will not remain a victim, he thought. Not forever. He looked back over his shoulder and saw his father holding the leather strap, preparing to strike yet again. And though his knees quaked and his body bled, he felt a burning anger in his chest. Someday, father, he thought, I will hold the whip, and it will be you begging for mercy. And when that day comes, I will remember this moment and I will give you exactly what you deserve.
His father struck again.
Gaelan awoke. 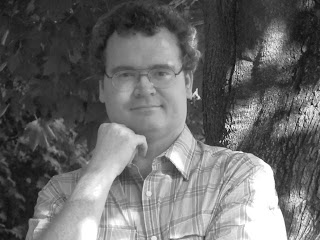 Matthew D. Ryan is a published author living in upstate New York on the shores of Lake Champlain. His work has been featured on-line at Aphelion.com and YesteryearFiction.com. He has been deeply involved in the fantasy genre for most of his life as a reader, writer, and game designer. He is the operator of the web-site matthewdryan.com which features his blog, “A Toast to Dragons,” a blog dedicated to fantasy literature, and, to a lesser extent, sci-fi. Mr. Ryan says he receives his inspiration from his many years as an avid role-player and fantasy book reader. He has spent many long hours devising adventures and story-lines as well as gaming systems for role-playing games, playing a motley assortment of characters in RPG worlds, as well as digesting the writings of J.R.R. Tolkien, Robert Jordan, and others. As a result, he has great depth of experience in the fantasy genre and feels it was a natural shift for him to move into fantasy writing.

Mr. Ryan is the author of the exciting dark fantasy novel, Drasmyr, The Children of Lubrochius, and The Sceptre of Morgulan, as well as a growing number of short stories. His first novel, Drasmyr, won the book of the month award on Long and Short Reviews: Young Adult for the month of September 2012. The story features a traditional Dracula type vampire in a Middle-Earth type setting. It is a dark fantasy geared toward teens and adults that has consistently earned reviews in the four and five star range. Drasmyr serves as the prequel to his series: From the Ashes of Ruin. In addition to Drasmyr, The Children of Lubrochius, and The Sceptre of Morgulan, Mr. Ryan has published several short stories on-line, including: “Haladryn and the Minotaur”(published at the now defunct Pegasus On-line), “The River’s Eye”(published at YesteryearFiction.com) , “Escape”(published at Aphelion.com), and the three-story collection Of Dragons, Love, and Poison.. He has also spoken on the topic of “World-Building” utilizing his considerable experience as an author and game-designer. When not engrossed in his fantasy worlds, Mr. Ryan can be found volunteering at the local food shelf or playing with his cat, “Confucius,” who is as wise and wily as his name suggests.