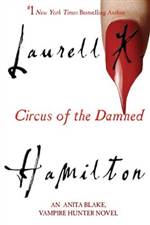 The big question of the day—at least the one people keep asking Anita Blake—is who is the Master of the City? Anita’s not telling anyone, although she isn’t entirely sure herself why she even wishes to protect Jean-Claude. Some things just don’t bear thinking about.

A phone call from the police leads Anita to a crime scene in Arnold, south of St. Louis. It appears the victim was killed by more than one vampire, as in a mass feeding. Was this the work of one of the two master vampires in St. Louis? Or is there a newcomer they’ve been unaware of?

Anita leaves a message for Jean-Claude that she needs to see him, and he sends word for him to meet him at the Circus of the Damned that night. On arrival, she’s taken up to his office in the midst of the big top. There she meets Yasmeen and Marguerite… and Richard. What’s a nice guy like Richard doing in the middle of all this?

Anita is two marks away from being Jean-Claude’s human servant, although damned if she intends to let that happen. But there’s a new player in town who has designs on having Anita fill that role for him, and she realizes she’s stuck between a rock and a hard place. What to do now?

Anita tells Bert she needs more help at Animators Inc, and she gets it in the form of fresh-faced Larry, an innocent who has no real idea what he’s getting himself into. But his innocence is about to go by the wayside when he pushes himself too far and loses control of a zombie he’s raised.

And then there’s Edward, who’s determined to learn who the Master of the City is and where is his daytime resting place… and he’s willing to kill to find out.

The action never stops in this third installment of the Anita Blake series. I admit there are times I don’t care for Anita, times when I don’t understand her. Especially when it comes to Jean-Claude. I keep thinking it’s in her best interest to become his human servant, and it’ll be good for both of them. I also happen to think Jean-Claude is damn sexy.

And now we’ve got Richard to add to the equation. Anita is undoubtedly drawn to him, but can he be everything he appears to be? And why does Jean-Claude seem to be throwing Richard her way?

I love the worldbuilding that Laurell Hamilton does to create this alternate St. Louis, populate it with vampires and other creatures that go bump in the night, and make it entirely credible. I also love reading about locations that I recognize, which is pretty cool.

The race is on to see who can finish marking Anita first. I totally loved this book and can’t wait to read more. A very worthy addition to the series, maybe even my favorite so far.
Posted by Julie Lynn Hayes at 12:01 AM