Into the Spider's Web (Halloween Rose and Thorne) Part III

As promised, here is the next part of my Halloween tale. Look for the end tomorrow, as well as a giveaway! 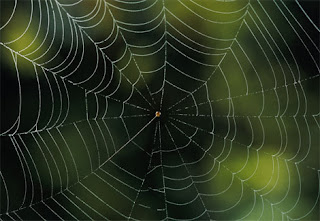 Into the Spider's Web Part III


Nothing to be done but grin and bear it. While bitching and whining might have been more psychologically satisfying, it would have got me nowhere and would only have delayed the inevitable. And there really was no sense in arguing with Ethan, since he really was a silver-tongued devil, so I decided to just go with it.

Ethan volunteered to shave my legs, so I peevishly agreed to let him. I decided that for what he’d done,  I deserved to be pampered and he deserved to be punished, although I suspected he didn’t view it as punishment. Especially since it was his idea in the first place. How could I really object, though, since he had a very gentle touch? And he kissed my legs as he worked. Bet that’s something I wouldn’t get in any fancy salon, even out here in the Land of Weirdness.

Once that was out of the way, I shaved my face and showered, being careful not to get my hair wet. Then I pulled it back into a bun on top of my head, flattening it as much as possible so it wouldn’t poof up the wig. “You know how much fucking trouble I’m going to for you?” I practically shouted from the bathroom. By now, Ethan was probably already dressed in all his glorious Roman-ness. “Do you have any idea how horrid this lighting is? Don’t complain to me if I botch this make-up.”

Ethan stood in the doorway, striking a pose. Damn, that costume looked good on him. Made his legs look even sexier. I eyed the skirt critically. “Are you going commando under that?”

“That’s for me to know and you to find out.” He grinned and I scowled.

“For your sake, you better hope you’re not, because if I have to focus on you and keep an eye out for Hollywood wolves trying to cop a feel, I might miss something important going on around us, if you know what I mean.”

“I know just what you mean. Don’t worry. I’m not,” he assured me. He took a step into the room, and I felt my temperature begin to rise. And other things.

He kissed me sweetly, glanced south, and smirked. “Good thing that dress isn’t completely sheer. That won’t show as much.”

“Yeah, real lucky,” I muttered. “I feel like I won the lottery. Now shoo while I put on my face.”

He obediently left the room and I turned my attention to my face in the mirror once more, going extra heavy on the coal black liner, and adding gold shadow that made my blue eyes practically pop. A touch of blush on my cheeks, and the barest hint of lipstick completed my look.

“Ethan, hand me the costume, will you?”

He stood in the doorway and watched as I shimmied into the too-sheer gown. Luckily there was an under layer of skirt that was a little darker and didn’t reveal the silhouette of my gun in its holster. I had nowhere else to carry it, and I wasn’t about to go unarmed.

Finally, I added the wig. It fell in a sheer black fall down my back, and was as heavy as I’d dreaded. I’d probably have a headache by the end of the night. I set the crown on my head, and slid the arm bands into place, followed by the bracelets.

I placed my fingers lightly atop his palm and he led me regally into the bedroom. I gingerly sat on the edge of the bed while he placed each sandal on my foot and laced it up my calf.

“I think you’re the one who’s going to be fighting off wolves tonight. I think I just might have to kick a little Hollywood ass in order to defend your honor.”

I flushed and rolled my eyes. “Did anyone ever tell you you’re full of it?”

“You do, all the time.” Nothing ever fazed that boy. He had a comeback for everything.

I had a thought. “So, if you’re Wolfgang, who am I? I should have a name in case someone asks me what the hell it is.”

“Of course you have a name. How about Brunhilda?”

“Are you fucking kidding me?” One look in his eyes and I knew he was.

“How about Carlotta?” he suggested. Much better. I could handle that one. Even if it did mean manly. It seemed appropriate, under the circumstances.

“Are we married?” I wanted to know. “We should get our stories straight in case we get separated and someone tries to grill us.”

“If we were married, the invitation would say Mr. and Mrs.,” Ethan pointed out. “How about engaged and very much in love?”

“I can live with that. We can go over details on the way there.”

As we headed out the door, I hoped tonight would not provide any actual scares. For us, anyway.
* * * *
Spider’s estate sat on the top of a steep hill which offered a breathtaking view of nighttime L.A. It was lit up brighter than the Vegas Strip. He had several valets parking the guests’ cars. Where they were parking them, I had no idea. I hoped that wouldn’t come back to bite us in the ass. We turned over our car at the foot of the hill and walked up the winding driveway.

The house looked like something straight out of Gone with the Wind, only Hollywood style, with a Halloween theme added for good measure. The lawn, which resembled an airplane runway, was littered with headstones, and what seemed to be freshly dug earth. I half wondered if maybe these graves were occupied by actual victims,  and I had to resist the urge to dig one up to find out.  Maybe later.

Zombies walked through the graveyard, scaring guests at random, eliciting screams of excitement. Nothing terrifying. Just good clean Halloween fun. Witches on broomsticks flew through the sky, so real you could almost forget you saw the wires they hung from. Vampires and ghosts and goblins, oh my. No stone had gone unturned in the search for the proverbial thrills.

We reached the doorway, where we presented our invitation to the bouncer at the door, who bore an uncanny resemblance to Frankenstein’s monster. I wasn’t going to be the one who asked him where he got his costume, only to learn he wasn’t wearing one.

He looked from the invitation to me. “How does the lady wish to be announced?”

Well, knock me down with a feather. The monster had manners. I told him and listened with satisfaction as he announced, “Wolfgang Meier and Miss Carlotta.”

We stood in the middle of a huge foyer. A chandelier the size of the State of Liberty’s torch hung above us, its prisms sending rainbows of color cascading about the room, painting the guests in their myriad costumes. We joined what was obviously a reception line. Playing my part to the hilt, I laid my hand on Ethan’s arm as we approached the couple who were undoubtedly the host and hostess.

Spider was surprisingly short, not at all spidery, as I’d imagined. He had dark hair, carefully groomed, and fleshy cheeks, and under his rather large nose a caterpillar had taken up residence, perhaps in search of shade. When he smiled, I could see that he’d made some orthodontist a very happy man—a perfect smile, gleaming to the best polished perfection money could buy.

In contrast, his wife was thin and tall and blond, standing a good head above her husband. She didn’t smile, so maybe she hadn’t received the same great dental care her husband her, or maybe she was unhappy about something.  There was no warmth in her eyes at all. Which just goes to show money can’t buy happiness, ‘cause she sure had the money, but no sign of the happiness.

Of course, that was just a quick assessment based on zero acquaintance. But hey, it’s what I was trained to do.

Now that’s something you don’t expect to see at a swanky Halloween party.

As we approached them, I saw Spider’s eyes light up, and for a moment I was afraid we’d been made somehow. But then he made a low, sweeping bow before me. “My queen,” he intoned like he’d seen too many old mummy movies, “my beautiful Queen of the Nile, I am yours to command.”