Happy Easter: A review and a Giveaway

Happy Sunday and Happy Easter to everyone! This is going to be a quiet day for us,  just me and Sarah chilling at home. I'm going to make brunch when she gets up. Other than that, no plans. No ham for dinner. Sort of burnt out on that, so I'm making  mustard chicken instead.

But I wanted to do something for my blog, so I'm going to post my review of Jesus of Nazareth, because it's appropriate for today, and it's my favorite Jesus movie. Yes, I do enjoy watching them, and there are some very good ones out there, and some less than good ones. But today I want to share  my feelings on Jesus of Nazareth, starring Robert Powell

Also, I want to give today, so I'm going to have a giveaway. A copy of any of my eBooks. What do you need to do? Just comment, and don't forget to add your email address, and tell me what your favorite Jesus/Easter movie is. If you don't have one, tell me something else. The giveaway will run through the end of the week. And enjoy the day!

There are few people who are not familiar, at least to some degree, with the story of Jesus of Nazareth, from 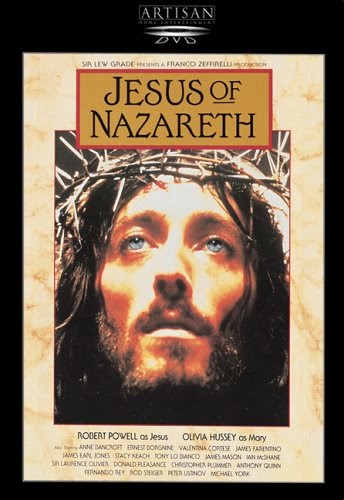 birth to death.  It's a story which has been portrayed in books, in songs, in verse, as well as in the cinema and on the small screen many times, not to mention it has a prominent place in the New Testament.  In 1977, acclaimed filmmaker Franco Zeferelli filmed his own version of the story, which was broadcast as a TV mini series of more than six hours' duration (probably a lot more than that by the time commercials were thrown in).  I admit that it took me a while to get around to watching this version because I was put off by the choice for the lead role of Jesus Christ.  I had only seen Robert Powell in one thing prior to this, and that was the rock opera Tommy, where he played Tommy's father.  I could not see him, based on that one performance, as Jesus Christ, so I didn't try.  And I was skeptical when I heard of his powerful performance in the role.  I stuck with old familiars, such as King of Kings, with Jeffrey Hunter, and two versions of Jesus Christ Superstar.  Until I finally got around to seeing this version.

I was totally wrong, and very remiss for not having watched it sooner.  This film delves in great depth into the life of Jesus, beginning even before his conception.  Robert Powell is magnificent as Jesus.  He completely brings him to life, and makes him real in a way that I think few can ever match (I admit I haven't seen all Jesus films, of course).  Even despite the blue-eyed thing and the fact that he doesn't even look Jewish, which of course Jesus was.  But putting that aside as a cosmetic difference, he has a definite presence and an appeal and his eyes are truly haunting in their intensity.  One of the reasons for this is that Zefferelli had him not blink, an effective method of creating an otherwordly presence when among men.  The notes I read said he only blinked once, and that includes the portrayals of him at all ages, so I must conclude that the one scene is the one at the very end; at least it's the one I noticed.

As I said, the story begins before his conception, with Mary (Olivia Hussey) and Joseph, and a lot of time is spent with them.  In fact, after an hour into the film, we are still dealing with an infant, which is pretty drawn out by anybody's reckoning.  I admit, the beginning is rather slow, but not uninteresting.   Olivia Hussey is an unusual choice to portray His mother.  She had worked with Zefferelli prior to this in Romeo and Juliet, in 1968.  At the time Jesus was done, she was 26, but certainly doesn't look it.  I can't honestly say she added anything to the character, but she wasn't bad either.  Kudos to the film for dealing with what must have been a difficult subject between herself and Joseph, who is asked to take on the role of father to a child he knows for a fact can't  be his - a difficult task for any man.  But he rises to the occasion, and helps to provide Jesus and his mother with the home and stability that they  need, despite the difficulties they must go through along the way.

The cast of Jesus of Nazareth is a stellar one by anyone's standards, and whereas sometimes that's a great and wonderful thing, it can also be a deterrent in some ways, especially if the actor or actor involved is very well known outside of the part.  I don't know about others, but I found having Darth Vader (James Earl Jones), Donald Pleasant and Ben Gazarra as the three magi was a bit offputting.  Michael York made an interesting John the Baptist, lacking perhaps a bit of the fire and brimstone to be found in Robert Ryan's portrayal in King of Kings (and a whole lot of the crazy).  What I found interesting in my reading (a novel called Pilate's Wife by Antoinette May), was that Jesus and John were cousins, a fact that I'd never heard before, which is hinted at here if you pay attention.  Make of that what you will, I'm just throwing it out there.  Christopher Plummer acquitted himself well as Herod Antipas, dealing with a nagging wife whom he loved, despite her shrewishness, and a nymphetic stepdaughter, who inflamed his lust.  You can feel his sympathy with and liking for John the Baptist; he finds him harmless, and is loath to do anything against him, until driven to it by a rash promise to his wife.  Also very interesting casting is Ian McShane as Judas Iscariot, one of the more sympathetic portrayals of him I have seen, not resorting to automatic bad guy status.  He plays him as sincere and earnest, believing he is doing what is best for Jesus, not realizing he is being used as a pawn by Zerah (Ian Holm).  Other members of the cast, which is too numerous to list in its entirety, include Rod Steiger, Laurence Olivier, James Mason, Stacy Keach (as Barabbas), Anne Bancroft, Ernest Borgnine, and many more.

Without giving a blow by blow account of a well-known story, I'd like to mention two scenes which stand out in my memory.  The first involves Ernest Borgnine as a Roman centurion, who approaches Jesus to ask for his help.  He has a servant that is ill, and the man is more a friend than a servant, and he is very concerned about him, will Jesus please help him?  Although many of those around him protest at the centurion even being there, because of his being Roman and all, naturally Jesus does not listen to words of hate, but instead to words of need.  He says he will come with the centurion, who then protests that he does not expect that, he does not wish to trouble him.  He goes on to say that he just need say it is done, that then it will be done, he understands how that works.  As a soldier, he gives the order and it is obeyed, without him  having to be there.  Thus it is with Jesus.  He trusts that if Jesus says it will be, then it will be.  Jesus is very touched by the faith in him that the Roman evidences, and tells his followers that this man has got it right, that he understands better than they do.  That is a very heartwrenching tearful moment, especially when the news arrives that the Centurion's servant is well once more.

The second moment comes on the night of his arrest, prior to Judas' arrival,  as Jesus waits in the garden of Gethsemane, his disciples sleeping around him.  He is apprehensive and a bit fearful, naturally so, of what is going to happen.  And for a moment he is filled with doubt, and he has some introspection going on, and this is one of Robert Powell's finest scenes, I do believe.  I was very very touched, and wept myself.

Yes, six hours is a long film to watch.  I don't pretend to have watched it in one sitting, or two or three.  But I'm very glad I did.  This is one of the best versions of this story I've ever seen, and I highly recommend it.  I don't think you'll be sorry if you take the time to watch it.