I know it's a bit late on Sunday, and I promise to do better  next time, but better late than never, right? I came across Sexy Snippets, which is just what I've been wanting. Something to replace Six Sentence Sunday. Somewhere to post sentences, either from a WIP or a published book. So that's what I'm going to do. And I promise that next time, I'll do it earlier.

Today I'm going to post from my newest release, Do Not Go Gentle Into That Good Night, my first horror story. Don't forget to see who else is participating, and read their sexy snippets here


Do Not Go Gentle Into That Good Night, now at Muse


Lightning sliced across the night sky like a jagged scar. It briefly illuminated the countryside, throwing twisted-limbed trees into momentary sharp relief. The thick ripe foliage of summer was long gone, and the land was left naked in the barrenness of winter. Several heartbeats later followed the thunder, a dull drumming in the background of the heavens that steadily increased in volume with each repetition.

The horse was skittish and pulled against the reins at the sound, but its rider pressed a reassuring hand against its heaving flank and it grew still once more; the clop of its hoofs echoed eerily in the momentary peace between the waves of sound. A second steed stood beside the first; it, too, pawed the ground in disquiet, its ears flattened against its head, expressive of its disapproval. 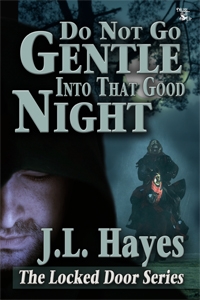