Please welcome back author Killarney Sheffield, who's going to talk about the inspiration for her newest release, Through Gypsy Eyes. 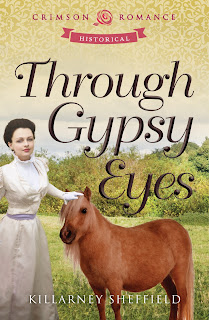 Hello, let me introduce myself. My name is Killarney Sheffield, the author of ‘Through Gypsy Eyes’ releasing from Crimson Romance on April 15th 2013. ‘Through Gypsy Eyes’ is my 8th published novel.
Many people have asked me just how I came up with the idea of a blind heroine and a guide animal in the form of a seeing eye pony named Jester. Like many authors, I sometimes struggle with ‘showing’ vs ‘telling’ and developing the sensory dimensions in a novel. I started writing a short piece from a blind woman’s POV. Obviously my character could not ‘see’ the world around her, but had to interpret it through touch, taste, smell, and the sounds around her. It is a wonderful exercise that really helped me connect with Delilah. The story just took off from there and refused to stay quiet until I seriously wrote her story and for me, as a Canadian farm gal ,a book is never complete without some kind of animal sidekick. Most people would have gone with the guide dog approach but, I hate to offend anyone here, I am just not a dog person. My whole life has been spent around show horses of various breeds and disciplines. As I was thinking on an animal sidekick, I remembered an old show I saw once on ‘Animal Planet’ about a lady in the USA who trained miniature horses to be guides for the blind. She used a harness similar to a dogs, put cute little sneakers on the pony’s feet for traction and house trained them. These remarkable little creatures could do everything a guide dog could and posed less allergy problem. From this simple show the idea behind Jester was born and he quickly became a most endearing character who threatened to steal the story in more than a few scenes! You can view a quick teaser of the tale here: http://youtu.be/S6qfLlbIkxA

True to my love of critters big and small, I am currently polishing another historical romance novel with suspense, adventure and paranormal aspects to it titled ‘Love’s Magic’. It is the story of a female magician and her unusual sidekick, a black Holland rabbit named Dexter.

Pre-release review for Through Gypsy Eyes.

Through Gypsy Eyes is not your usual romantic novel, and is all the better for it. The author has a compelling way of writing her stories. She is a master at choosing the few words that make a character come to life for the reader, of offering you people and situations larger than life but with the ring of truth. Ms. Sheffield's characters have virtues, flaws, and challenges, traits that make you want to read on into the night.  And of course, in Through Gypsy Eyes, there is the pony, a very endearing addition.

Blurb for Through Gypsy Eyes
Delilah Daysland doesn’t see herself as marriage material. After all, who could love a woman locked in darkness?Try telling that to Lord Tyrone Frost. He’s determined to do his duty and see her wed to a suitable gentleman, as the King commands.Delilah has other plans. Convinced her father’s death was no accident, she must depend upon her pony Jester to guide her through everyday challenges as she seeks the truth behind mystery, murder, and deception. Though drawn to Tyrone she’s afraid to trust him, until she sees the world and love through gypsy eyes. Buy link/publisher link
http://www.crimsonromance.com/upcoming-releases-romance-ebook/through-gypsy-eyes/