Good morning!  Please welcome author Sallie Moppert to Full Moon Dreaming. She is here to tell us about her new release, Good Cop Bad Cop. Sallie will be awarding one randomly drawn commenter a $15 Amazon/BN GC, and three commenters will receive a prize pack consisting of pen, keychain, and magnet (US/Canada only) via Rafflecopter. The more you comment, the better your chances of winning. To find the other stops on her tour, go here. Don't forget to look for the Rafflecopter at the end of this post! 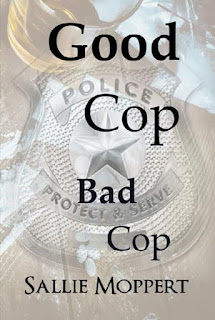 When his mother is beaten to death by his alcoholic stepfather, fourteen-year-old Samuel Marlowe is rescued from seeking revenge against him by a chance meeting with Officer Edwin Hill. The veteran policeman takes Sam under his wing and even becomes the boy’s foster father.

Sam becomes a cop and works alongside his beloved mentor until Edwin is killed in a shooting. Hailed as a hero for his actions in the case, Sam feels like anything but. He begins a dark descent away from the stand-up policeman he once was, turning to drugs and alcohol to numb his pain and his PTSD.

The police captain assigns Sam a partner hoping to salvage what is left of him by forcing him to become a good role model for the young recruit. Needless to say, Sam is not pleased with the arrangement, protesting it up until the moment Junior Detective Dahlia Bennett enters his life.

Will he try to shake her loose? Does her by-the-book ideals and strong moral code rub off on him? Will his relaxed attitude and views on true justice start to influence her?  What will ultimately lead to the two becoming a solid team? When Dahlia declares she wants to reopen some cases believing that the wrong person was sent to prison, Sam tells her straight out that in doing so, she would be putting her life at risk. As Dahlia persists, Sam is faced with the ultimate decision: let Dahlia reopen the cases and discover his crimes, or kill her to keep her from learning the truth.

“Detectives, this is Agent Shawn Martell and Agent Florence Calvert from the FBI,” the captain introduced the man and woman seated in the visitor's chairs in front of his desk respectively. “And, agents, this is Samuel Marlowe and Dahlia Bennett, my finest detectives, as you requested.”

Sam and Dahlia exchanged handshakes with Shawn and Florence. Shawn Martell was a similar height to Sam, falling a tad under the six-foot mark. Auburn colored hair, caramel brown eyes, and an overall aesthetically pleasing appearance, Shawn looked as though he could easily portray the ‘hunky agent’ role on an FBI television drama, Dahlia considered. Christ, I’m even starting to think like Sam.

Florence could hold her own against her partner, with a long and slender frame, sleek black hair that hung down to the middle of her back and celeste blue eyes. She was taller than the average woman, nearly measuring up to Shawn, save for an inch or two. If her partner fit the hunk role, Florence appeared to be apt for the “woman in charge” role in the drama.

We're obviously not here to sightsee,” Shawn began to say.

“We're investigating a human trafficking ring,” Florence said. “And would like the assistance of the local authorities.”

“You know, Flor and I,” Shawn thumbed toward his partner. “Would stand out like a sore thumb in a small town like this.”

“Seeing some FBI agents could cause the potential perps to run like hell,” Sam said, understanding what the agents were getting at. “But two local cops poking around would be far more discreet.”

“Exactly,” Shawn said. “Could we get your assistance?”

1) Take these three words and give me a 100 word or less scene using them: hammer, saucer, traffic lights
Only 100 words?! Challenge accepted. Okay, here goes:

The raindrops hammered the roof of the tiny diner. An oldies tune crackled from a vintage radio, barely heard over the chatter throughout the room. The diner was packed for a Friday night, many seeking shelter from the sudden rainstorm. To Rich, the storm outside couldn’t compare to his internal storm. Lost in his thoughts, the clink of the cup hitting the saucer snapped him back to reality. Rich looked at the person across the booth.
“You’re sure?” he asked.
“Positive,” Katherine replied.
The traffic lights across the way became blurred from his tears. The baby wasn’t his.

2) When you start a new story, do you begin with a character, or a plot?
Plot, definitely. I love working with writing prompts. I think it’s interesting to see how that word or sentence evolves over the course of the story. I record what prompt I started with on a certain story and, sometimes, the end result is very different than what the prompt suggested. In some cases, if I hadn’t written down what the prompt was, I certainly don’t think I could have identified what inspired the story otherwise! I like letting stories and characters develop on their own, taking me along for the ride.

3) Who’s your favorite horror villain and why?
I don’t think I have a specific favorite horror villain, but I am a fan of American Horror Story and I enjoy seeing the villains that Ryan Murphy and team come up with. Their characters usually have a background that is explored throughout the series, such as Bloody Face from Asylum or Michael from Apocalypse. I love being able to find out why the villain became the villain; I have an interest in profiling and psychology, so that is all just fascinating to me. Plus, from a writer’s standpoint, I appreciate the development of the character. Sometimes the background and experiences of the character can almost make them a victim that you feel sympathetic toward, even though they’re a murderer or kidnapper or what have you. I love that emotional complexity. That’s how I got involved in watching the show (and many other shows) in the first place; I got emotionally invested in an episode I was watching and never looked back.

4) Do you have a historical crush and if so, who is it?
It’s not a crush per se, but I have such admiration for Agatha Christie. She is by far my favorite author. Her mysteries are ingenious; there’s a reason she’s been dubbed the Queen of Mystery! I am in the process of collecting all of her works - both mysteries and those under her pseudonyms - and reading them all.

5) Is there a story that you’d like to tell but you think the world isn’t ready to receive it?


The world may be ready, but I’m not! I have so many stories planned that need a lot of TLC before being released to the world. I believe, as of writing this, I have six stories I’m working on at the same time. I like to bounce around to different projects when the well of inspiration dries up for one.

A New York native, Sallie has a Master’s degree in Criminal Justice, with a Specialization in Forensic Science. A lifelong mystery fan, she has combined her love and passion for writing with her interests in criminal justice, law, and forensic science.
Sallie currently resides in New York with her family and her “zoo,” which includes two dogs, two guinea pigs, a betta fish and a leopard gecko. She works as a freelance writer/editor and a legal assistant.