Good morning! Please welcome author Bobbi Smith to Full Moon Dreaming! She is here to tell us about her new release, Arizona Caress. Bobbi will be awarding a $10 Amazon/BN GC to one randomly drawn commenter during her tour via Rafflecopter. The more you comment, the better your chances of winning! To find the other stops on her tour, go here. Don't forget to look for the Rafflecopter at the end of this post! 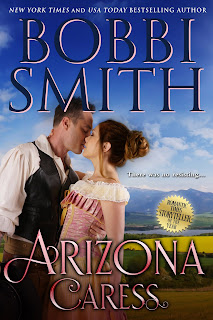 A dashing man from back east meets an unconventional Native American woman and they join hearts against all odds in this spellbinding tale of passion and western adventure from New York Times bestselling author Bobbi Smith.

Chance Broderick has plenty of charm and more than enough wealth, and his life among the Boston Brahmins offers plenty of tempting distractions. But when he receives word that his brother is in grave danger in the Arizona Territory, Chance dutifully travels west to help. There he finds wild, vast lawless lands full of surprises. But his greatest shock on the frontier is when he discovers that the tracker he’s hired is not the brash young boy he assumed, but a beautiful young Native American woman, Rori.

Raised by her Native American grandfather after the death of her white father and her Pima mother, Rori is an expert tracker who knows how to fend for herself. Chance is fascinated but she takes an instant dislike to him and nothing will satisfy her more than showing the arrogant man from back east a thing or two about how things are done on the frontier out west. Nothing could satisfy her more, that is, except the pleasure of his searing touch, his soft kisses. For Rori can’t help craving Chance as fiercely as he desires her and as they overcome the worlds of indifference and hostility which threaten to separate them, they find true love is their one destiny.

Chance didn’t know what had awakened him. He glanced around and noticed nothing out of order. It seemed Burr and Rori were both still asleep across the campsite. Relaxing his guard, he closed his eyes again, and it was then he heard something in the direction of the creek.

Chance knew he hadn’t imagined it. He slid his gun out of his holster and got up to make his way down to the water’s edge. He moved quietly, staying hidden in the brush. He could hear a slight splashing in the water. He wasn’t sure what he’d been expecting, but the sight of Rori taking a bath was the last thing he would have imagined. The whole situation would have been funny, if it didn’t make him feel like such a fool. He’d been ready to shoot whatever intruder he found there, and the intruder turned out to be the obstinate boy!

Chance wanted to throttle him. What the hell was he doing taking a bath?! The temptation to embarrass him was too great to pass up. The scrawny kid was standing totally naked with his back to him in waist-deep water. Chance knew if he moved quickly, he could take him by surprise and give him the scrubbing he well deserved.

Without another thought, he laid his gun aside and charged into the water, grabbing the boy by his shoulders. It occurred to him that the boy felt awfully soft and fragile, but he didn’t stop to think about it. He just picked him up and dunked him good.

Rori gave a small shriek of outrage as someone grabbed her from behind and pushed her underwater. For a moment she actually feared for her life, but the powerful hands that held her quickly released her and she surfaced sputtering mad.

“What the—?” she spat out in furious indignation as she came up and faced her attacker. She forgot she was naked. “YOU!”

“You’re lucky I didn’t shoot you!” Chance began laughing, but his laughter stopped abruptly as his gaze dropped from Rori’s outraged expression to the perfection of her breasts, bared now to his gaze in all their feminine glory. He froze.

After working as a department manager for Famous-Barr, and briefly as a clerk at a bookstore, Bobbi gave up on career security and began writing. She sold her first book to Zebra in 1982.
Since then, Bobbi has written over 40 books and 6 novellas. To date, there are more than five million copies of her novels in print. She has been awarded the prestigious Romantic Times Storyteller Award and two Career Achievement Awards. Her books have appeared on the New York Times Best Seller List, the USA Today Best Seller List and the Wal-Mart Best Seller List.