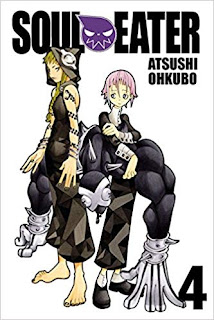 Medusa uses Eruka to free a prisoner from the witch jail. Surrounded by prison guards, the prisoner shows why he is no ordinary man. Back at DWMA, Maka tells Soul, to his dismay, that she has requested special tutoring from Dr. Stein. Stein warns them that if they fail, they may never be able to match soul wavelengths again. But Maka decides to take the risk, wanting to get stronger so she will never put Soul into danger again. When Stein tells them what they need to do, it sounds simple in theory, but doesn’t exactly work out that way.

Make, Soul, Black Star, and Tsubaki are in London! While attempting to cross a bridge, they encounter the escaped prisoner, who’s now working for Medusa. They realize he is on Shinigami’s list, so think their assignment is off to a good start. But this man isn’t what he seems, and he is stronger than they think! Medusa watches from the sideline, waiting to see how Soul’s black blood will react to the situation.

Stein warns his students that it is almost time for his “ultimate written exam”, which is required for meisters and weapons alike. Some students are more excited than others, and Maka is determined to rise to the top of her class. Unknown to her, her father is sending her “good luck” vibes. Maka finds getting Soul to study is difficult at best, while Black Star’s methods leave something to be desired. As far as Death the Kid is concerned, he has no need to study because he’s a Shinigami.

Death the Kid and his father are in a rowboat being rowed by the Thompson Sisters investigating the sighting of a mysterious black dragon that has apparently bitten off part of the Baltic coast!  They come upon an old ratty ship, the ghost ship Nidhogg, and the pursuit is on! Presuming this is the terrifying Black Dragon, Kid and the girls board the ship ready to do battle. In the process, they learn disturbing news concerning the DWMA.

Maka confides in Dr. Medusa her concerns regarding the black blood she coughed up, but Medusa assures her all is well and offers her some medicine. Stein may be on to her. Suspicious, he sends Sid to investigate her, which doesn’t end well. Kid tries to speak to his father of his concerns, but that doesn’t go well either.

I love the humor in Soul Eater, and I love the characters Atsushi Ohkubo has created. I even think Maka’s dad is cute, although very flaky and unreliable. Soul and Black Star are goofy and immature, but they are both good boys underneath it all. Maka and Tsubaki provide the stability in their lives. I like Death the Kid too, even if he has issues of his own. I liked the adventure with Kid and the Thompson sisters on the ship. I think it’s the first time, I haven’t seen him leave the scene to check on a supposed asymmetry.

The arc with Medusa continues, Now that they seem to be on to her, hopefully they can take measures to counter everything she’s done or plans to do. We see Crona and Ragnarok again. Hopefully we’ll see the end of all of them soon, including this new guy, Free. I’m sure there will be other villains, of course.

Another good volume of Soul Eater, looking forward to the next one!