Good morning! Please welcome author Megan Starks to Full Moon Dreaming. She will be telling us about her new release, House of Ash and Brimstone. Megan will be awarding a prize pack of best selling urban fantasy romance plus a copy of House of Ash and Brimstone to one randomly drawn commenter during the tour via Rafflecopter. The more you comment, the better your chances of winning. To find the other stops on her tour, go here. Don't forget to look for the Rafflecopter at the end of this post. 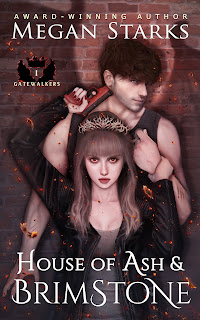 Hell has come to collect…

…but Gisele Walker has no plans to pay the debt.

As a half-demon paranormal bounty hunter, Gisele is used to flirting with death, but stealing a curio and opening a portal to Hell’s demon court is more than your average day job.

Now, she’s partnered with an infuriatingly handsome demon, Shade, who has more levels of grey than she can count.

Who can she trust to help save the city as Baltimore burns to the ground and ghouls roam the streets?

With a white-hot attraction burning between them and secrets blocking their path, Gisele must face her past and venture into the twisted heart of the demon royal court.

But with no memory of her past…

…will she be able to save their future?

A jumble of computer equipment and business supplies littered the office floor. Orange, blue, and manila folders spilled from an overturned metal cabinet. And in the shadows, Shade sat slumped in her green swivel chair, the hundred-page contract in his hands. He’d torn half of the place and the whole of her desk apart. He’d rummaged through her files, knocked over her pen and paperclip jars, and ripped the bottom right drawer out completely, dropping it on the floor. It was the drawer she kept locked—the drawer she’d left the contract in.

Clearly, it was what he’d been searching for.

“Real mature,” she said, irritated with his reckless, temperamental violence and his blatant disregard for her privacy. “Find what you were looking for?”

No doubt he planned to tattle on her to their boss. Her contract aside, the grimgolem was going to blow a gasket when he accounted for the damage to their computers alone.

“I hope it was worth it for you,” she continued, “because I am not cleaning this up.”

Rather than glare at her, he looked away. His brows drew together, lips pressing a tight line. “It wasn’t supposed to happen this way,” he said, voice raw. “They’ve tricked me.”

“Who has?” Gisele asked, but he ignored her.

The muscles in his arms corded as he gripped the contract tighter, crinkling the thick stack of pages, and she knew who he meant. He really was working with them—the elghoul and its master. For them. Working against her.

She chucked a stapler at him hard enough to bruise his chest, then crossed the room, closing the distance until she could have yanked him up by the collar of his soiled, bloody shirt. Instead, she smacked her hand on the desktop. Wood splintered.

“The woman in this contract? Who is she?”

“I can’t tell you that,” he answered, not even looking at her. Not even now. He sounded so defeated. “They’re going to kill you, and they’re going to use me to do it.”

And if they demanded it of him, he’d do it, just like that? What kind of a cold-blooded monster was he?

“Are you going to?” she asked, dreading his answer. “Going to rip me apart with your claws? Tear my throat out?”

The image of him, darkly winged and terrifying in the Office of the Paranormal, came crawling back, unwanted.

“Would you really do it?” she asked. It hurt, but she needed to hear him say it. “What happened to ‘I’ll protect you, so you don’t have to be afraid’?” 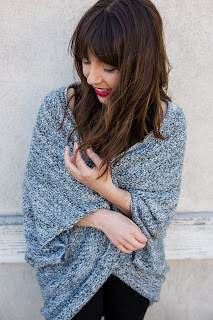 When she's not penning novels about magic and strong, kick-butt heroines, she enjoys playing video games and spending time with her husband and their cat, Sushi, in California.

Look for Night of Sunder & Sorrow, the sequel to House of Ash & Brimstone, coming in Spring 2020.

Crave more #Gatewalkers? For updates and to chat about writing, video games, coffee, and cute kitty-cats, come hang out on any of these sites: