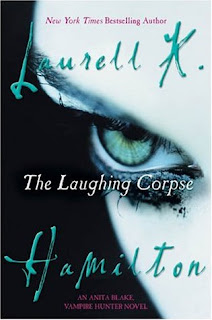 Anita Blake goes with her boss, Bert, to the house of a wealthy client who desires her services. What Harold Gaynor wants, though, Anita isn’t willing to do, since resurrecting a corpse that old requires a human sacrifice be made. And Anita won’t do that, not for any amount of money. The trouble is, Gaynor is one of those guys who just won’t take no for an answer.

As if she doesn’t have enough problems, she has to deal with fittings for her role as bridesmaid in her friend Catherine’s wedding. There are only so many ways to hide scars. Having an ugly dress to begin with isn’t helping.

Then there’s the case Anita is called in on for the police. It appears that a rampaging zombie has eaten a family, and it’s not a pretty scene. It would take a pretty powerful person to raise a zombie and have it kill. Anita can only think of a few people who might be able to do that, and one of them is dead, which tends to eliminate him. And she isn’t giving the police the name of the one person she really suspects, because surely that can’t end well. So she decides to confront voodoo priestess Dominga Salvador herself, with Manny Rodriguez at her side.

As if life wasn’t complicated enough, Jean-Claude—who is now the new Master of the City—keeps insisting that Anita is his human servant, which she denies, as often as she tells him not to call her ma petite. Denial is a wonderful thing.

The second book in the series is even more action-packed than the first. Anita Blake is a great character, even if she sometimes gets on my nerves. But on the whole I like her sense of humor, as well as her sense of honor and justice. The attraction between her and Jean-Claude only grows stronger, and I have to admit it’s a large part of the draw of the series for me, to see where their relationship goes.

I find it fascinating, personally, that the story takes place in St. Louis, and I enjoy visiting familiar spots as well as ones she’s made up but I can guess where they really are.

Anita seems to be in over her head at times in this one, and she doesn’t always come out on the right end of a fight. But she has guts and determination. And she’s about to learn some truths about herself.

A wonderful addition to the series, looking forward to the next one. Well-written and exciting, a must-read for Anita Blake fans.
Posted by Julie Lynn Hayes at 12:01 AM