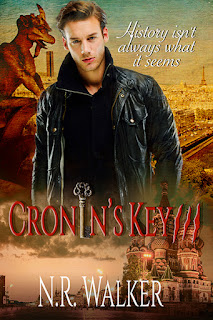 Alec MacAidan is becoming frustrated. He has every vampiric power there is, and some he hasn’t even tried yet, but all this testing is wearing on him. Considerate of his mate, Cronin leaps them both to their favorite field in Scotland. But suddenly Alec senses something and they have to leave… and quick. A vision has been put into his head, and Alec fears it’s a warning. But of what?

Five figures. Familiar and yet not. Human but not. While they are puzzling this over, the five appear again—not in Alec’s head, but in the same room with them. The bad thing is these newcomers can stop time for everyone but Alec and themselves. What else can do they? And what do they want?
Alec and Cronin and the others begin an investigation into these creatures. They have to learn everything they can about them in order to stop them and send them back where they came from. The fate of the entire world depends on them.

This is the third book in the Cronin’s Key series. I thoroughly enjoyed the other two. However, I’m sorry to say this one fell short of my expectations.

It wasn’t that it wasn’t as well-written. It was, although it could have benefited from better editing.
The research that went into this book was pretty amazing, especially for a history geek like myself. But I think the devotion to the research overshadowed other aspects of the book, and they suffered accordingly. Too much attention was given to devising the intricate plot and not enough to the characters that people the book.

First and foremost was Alec. In the second book, he got all these super vampire powers. He’s the strongest there is, and he can do anything. Maybe that’s the problem.  He’s become a caricature of himself. If this were fanfiction, I’d call him a Gary Stu, for sure. For those who are unfamiliar with the term, a Mary Sue (or Gary Stu in the case of a male character) is a character who is too good, too strong to be believed. More like a self-insertion by the author of what he or she wishes they were. It’s not a good thing. Alec seemed less real and more cartoonish.

Then there was Cronin. In this book, he is but a pale shadow of himself. He exists but for Alec, and he’s lacking any true character of his own.

Of course it’s inevitable that Alec et al would prevail in the end and save the day, it’s what they do. But I found the ending unpleasant and a bit of a joke. Part of the ending involves a needless tragedy. And the rest is just farcical.

I understand this is the last book in this series, and as far as I’m concerned, that’s probably a good thing. If there were more, I don’t think I’d want to read them, which saddens me, for I truly enjoyed the first two.

I know others will read the third book for the same reasons I did, but if you can avoid doing so, I would. I’d rather have remembered them as they were at the end of the second book. I gave this book 3.5 stars, and perhaps part of that is in fond remembrance of what was and what might have been.