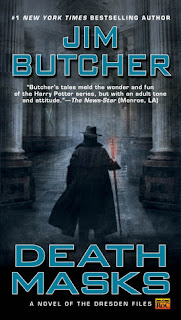 For reasons known only to himself, Harry Dresden agrees to appear on the Larry Fowler TV show, where he finds himself familiar with one of the other guests—Mortimer Lindquist, a mild-mannered man who sees dead people. Harry is exercising great restraint in the form of a suppression spell to rein in his wizard powers so they don’t go ballistic and destroy all the techno equipment on the set.  After a commercial break, they’re joined by two more guests—Father Vincent, who comes from the Vatican, and Dr. Paolo Ortega, renowned debunker of supernatural myths and legends. And, to Harry’s great dismay, he recognizes him as a member of the Red Court.

Ortega tells Harry in private conversation that he’s come to Chicago to kill him because of the trouble he has stirred up for the Court, and  then challenges Harry to a duel. If Harry wins, the Red Court will decree Chicago a neutral territory. Harry doesn’t want to think about the alternative.

Then Father Vincent wants a private moment too. Apparently Father Forthill recommended Harry to him. As they leave the studio, a hit man takes a shot, and Harry realizes he’s become the target of the gangster boss of Chicago—Gentleman Johnny Marcone. But why? Things take an even more bizarre twist when Father Vincent reveals what he wants from Harry. He wants him to recover the stolen Shroud of Turin.

And then, as if things aren’t complicated enough, a blast from Harry’s not-so-distant past blows into town and throws his heart into turmoil. Has Susan found herself another man? What will Harry do about it? Can life get any more complicated?

This has to be one of the most fun-packed, thrilling, adventurous Dresden Files yet.  Harry can’t seem to get into trouble fast enough. Not only his body but his heart is on the line. Between preparing for a duel he isn’t sure he can win, and trying to find out who stole the historic Shroud of Turin, and dodging Marcone’s death threats, Harry’s one busy man. Michael is there to help, despite his wife Charity’s intense dislike for Harry, and Michael has two more friends, the other Knights.  A familiar face from a previous book comes back and it’s very delightful to see him. I have hopes we’ll see more of Thomas in future volumes.

Jim Butcher is definitely in his element here. Much as I enjoyed the four books that came before, there is just something in this one that clicks on all cylinders. This book has it all and then some.  It contains most of the most creative creatures I’ve seen in a long time, including Nicodemus and his Medusa-like daughter Deidre. This is a definite home run for Jim Butcher and a splendid addition to the series. Can’t wait to read more!