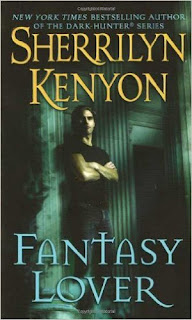 Julian of Macedon was once a great and fierce general whose exploits were legendary. But all of that is forgotten now. He’s been reduced to being a love-slave, stuck for all time in an erotic book, waiting the summons of the next woman who desires him, hers to play with for exactly one month before he must return to the book. His imprisonment is due to his jealous brother, Priapus. You would think with Aphrodite as a mother, Julian would get the help he needs, but that isn’t happening.
Grace Alexander is a sex therapist. Ironically, she has no sex life to speak of. Her one and only relationship was a sham, and the cruel man who used and abused her left her with no desire to try to love again, although she can dispense advice to her patients without difficulty. Grace’s best friend Selena is a practitioner of certain arts, and practices her magic in a public square in New Orleans. She hates to see her friend so alone, and when she accidentally stumbles upon the ancient-looking tome with the hot hunk on it, she gets a scathingly brilliant idea.

Grace doesn’t really go along with what Selena does, and she certainly doesn’t believe. But after a few drinks, anything is possible, so she tells Selena to bring it on. But when Selena intones the words to produce Julian of Macdeon, nothing happens and Grace is not surprised. However, in the middle of the night, after Selena has gone… things do happen… and Julian arrives looking more naked and glorious than a man has a right to.

Although he’s incredibly sexy, Grace refuses to use him to scratch her itch, and for the first time in a very long time, someone sees Julian as a man, and not a sex-slave. He finds himself falling for Grace, hard. But what purpose does it serve to love her, when at the end of the month he’s cursed to return to the book?

Not if Grace has anything to say about it.

I’ve read this book three times and loved it each time. Technically, this isn’t a Dark Hunter book, but I consider it a must-read if you wish to read the series because it introduces important characters. Plus it’s just damn hot.

I fell in love with Julian and Grace and wished only the best for them. The writing is amazing and very emotionally charged, as well as visual. I love the author’s sense of humor, and her turns of phrases. You can’t help but love these people, as well as their friends and family. Who doesn’t love stories that involve the gods and Greek mythology?

It’s hard to believe Ms. Kenyon can top this, but I already know she has, as I’m re-reading the series. If you enjoy romance, if you believe that love will find a way, and if you like to see people get what’s coming to them, this is a great book for you! This book has a lot of heart and soul. It’s a definite keeper.
Posted by Julie Lynn Hayes at 12:01 AM