Please welcome author R.T. Wolfe, who is here to talk about her latest release, Savage Deception, which I have also reviewed.  R.T. will be awarding a $100 Amazon or BN GC (winner's choice) to a randomly chosen commenter. The more you comment, the better your chances of winning. To find the other stops on the tour, go here.  Look for the rafflecopter at the end of this post! 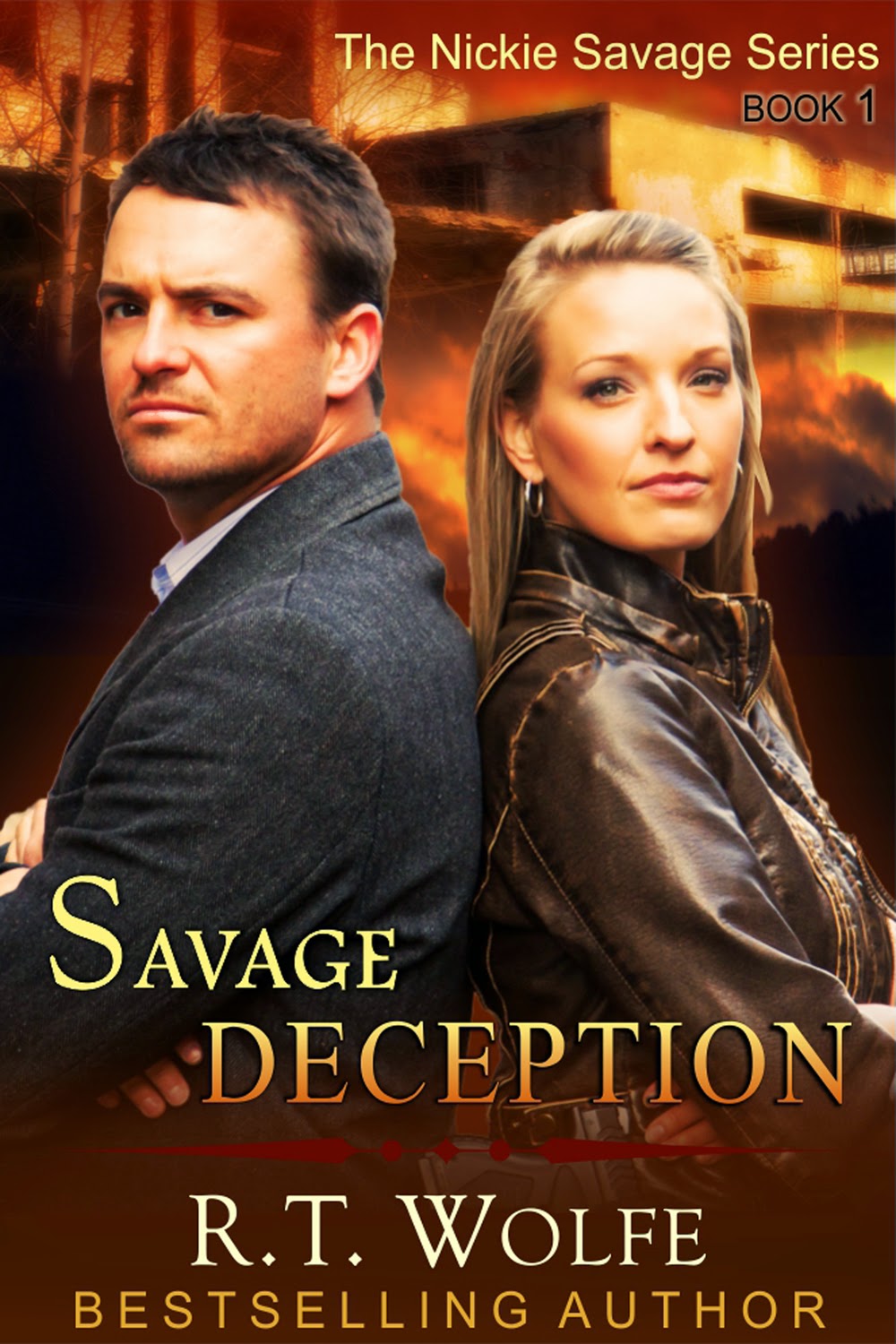 Busy juggling loan sharks and Amber Alerts, Detective Nickie Savage makes time when the FBI seeks her expertise with a child trafficking ring. But when Nickie discovers that the men running the ring are the same ones who abducted her as a young teen, the case gets personal.

Risking her badge, Nickie goes rogue. Luckily, she has Duncan Reed, along with his wire tapping and surveillance expertise. But Duncan also wants to take their relationship to the next level.

Now, Nickie must choose: break her own rules and risk her heart or forge ahead alone.

“This is our hotel.” Those were the only four words Nickie had spoken since Duncan picked her up at Vegas Metro. He’d expected her to be shaken after the day she’d had. He didn’t expect her to be shaking.

Heading for the elevator, he realized they were retiring to their room as the rest of the town was beginning their evenings. He heard them before the elevator arrived. Loud, drunk and male. The doors slid open to a small group of young men. They reeked of marijuana and alcohol. One did a double take at Nickie.

“The cop stripper!” he slurred. “I got your card in here somewhere.” He patted his pockets.

Nickie wore what she usually did. Button-down blouse, this one raspberry-pink, and black slacks … both tighter than most wear. She was never afraid to use her sexuality when it suited her. Her black boots had heels. Her gun was secured on her belt, along with her badge and cuffs.

Duncan saw it all through an angry haze of red.

The one patting his pockets took out some cash. The others whistled as they pulled out more bills.

Duncan stepped in front of Nickie.

“Come on, dude. Share!” they boy said to Duncan.

He wasn’t sure whose arm it was, but before he knew it a hand cupped her breast. As quickly as the arm reached her, Nickie twisted and had it wrenched behind the man’s back. “That’s assaulting a police officer you stupid piece of shit.” Her voice was eerily calm.

“Hey!” another one defended, landing a hand on her shoulder. Duncan took it, bending it back until he heard a crack. The boy bellowed in pain as his friends stepped in to help.

Fists flew and heads bobbed. They were drunk and young. That excuse wasn’t going to help them. Duncan ducked easily taking two down with solid hooks as he heard the soft heels of the security officer running toward them.

R.T. Wolfe enjoys creating diverse characters and twining them together in the midst of an intelligent mystery and a heart encompassing romance. It's not uncommon to find dark chocolate squares in R.T.'s candy dish, her Golden Retriever at her feet and a few caterpillars spinning their cocoons in their terrariums on her counters. R.T. loves her family, gardening, eagle-watching and can occasionally be found viewing a flyover of migrating whooping cranes. 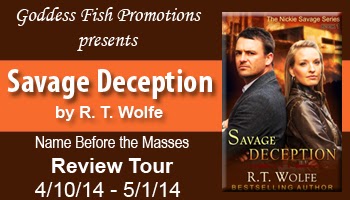 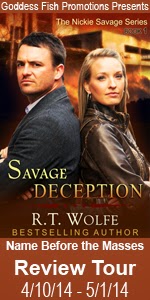 To call Nickie Savage and Duncan Reed polar opposites would be an understatement. She’s a damn good detective with a whole lot of baggage and he’s from a lifestyle she can only imagine, dripping with class and good looks. And yet somehow they work, in their own way.

Eight months before the story begins, NIckie had been the one who was responsible for breaking up a mass kidnapping ring that forced kids in their early teens into prostitution. Now the FBI wants her help with a similar situation. Little do they realize she has personal experience with a group just like this, of the kind that leaves deep scars.

Duncan has tried to amalgamate Nickie into his life as much as possible without freaking her out.  But she has so many damn rules she feels compelled to follow. And he respects them because he loves her.

Nickie and Duncan are each flawed in their own ways, and the author brings them powerfully to life. The writing is very strong and very fast paced. I found myself reading faster and faster in order to find out what would happen to them, because I couldn’t even begin to guess.

This is a rollercoaster of a ride that you’ll be glad you took. I was so involved with these characters that I carried them with me when I wasn’t reading. As if the story would continue and magically appear before me.

The love between Nickie and Duncan floored me, and I enjoyed their intimate scenes together, as well as watching them mesh as a couple, each learning how to be with the other. Together, each can be whole, through the power of their love.

If you like stories with suspense, mystery, despair, hope, and above all, love, give this a try. I loved it, and look forward to the next book in the series.