Last week, NBC brought forth a new program called The New Normal, and the program was good. Not perfect, mind you, but good, and a definite step in the right direction.


Bryan (Andrew Rannels) and David (Justin Bartha) are happy and in love in Los Angeles. David is a successful OB/GYN (I'm not sure what Bryan does but he's so gosh darn adorable, who cares, right?) All they are missing to make their lives complete is a little bundle of joy. 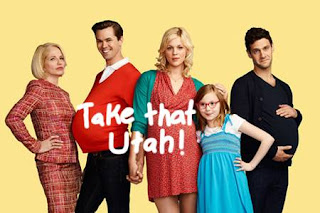 Goldie (Georgia King) is a single mom in the Midwest with an adorable and precious eight-year-old daughter Shania (Bebe Wood) and a bigoted, horrible grandmother (Ellen Barkin) who has raised her. Goldie is appalled at the things her Nana says, especially around Shania, and the child is not slow to let Nana know that she doesn't like her attitude. On an impulse, Goldie asks Shania where she'd like to go. "Let's drive to Hawaii!" So Goldie takes her grandmother's car and her daughter and drives as far as she can in that direction, forced to stop when she reaches the Pacific. There she takes stock of her life and her dreams. She had Shania far too early, putting everything on hold. Now she wants to make a better life for them both. But that takes money, if she's going to become a lawyer. 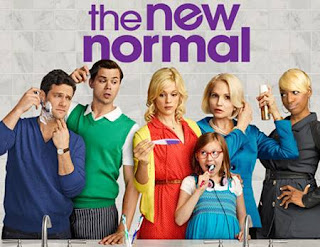 Bryan and David need a surrogate - Goldie needs a lot of money. It's a match made in heaven. She agrees to carry their child, and becomes pregnant by one of them and thus the premise of the show. An irate Nana follows Goldie, to her dismay, and insists on staying. Naturally, she finds the whole idea of the surrogacy distasteful.

Let me start out by saying this show is from the makers of Glee. But I decided to watch it anyway. After all, they also did American Horror Story, which I loved. Glee, not so much. I had to watch The New Normal simply because of the premise, and the chance to see what the network would do in showing a loving gay couple and their desire to have a child. 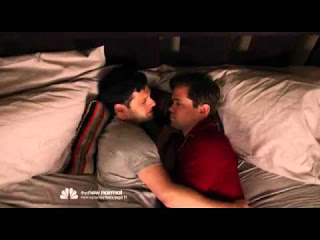 The relationship that is portrayed between Bryan and David is pretty damn awesome. They kiss, they cuddle, they have tender moments - they are even seen lying in bed together. No sex, but hey, you wouldn't expect that from a series on network TV, shown during prime time. It airs at 8:30 on Tuesdays here, in the Midwest. I don't even care that they don't show sex, that's not important. It's the love and affection that is, and it's there.

You might remember Justin Bartha from the National Treasure films (which I adore!) He played Nic's nerdy sidekick Riley. He absolutely shines as David, the more level-headed of the pair, while Bryan is the dreamer. I'm not familiar with Andrew Rannels, but I intend to become so, as he is gorgeous, sexy, cute, adorable, and plain dreamy. I hear he's in The Book of Mormon, the musical, which is coming here in February, and I pray that I can afford to go! Bryan is the starry-eyed one who wants to rush out and buy baby clothes, while David, being a doctor, is more practical and wants to wait until the pregnancy is farther along. 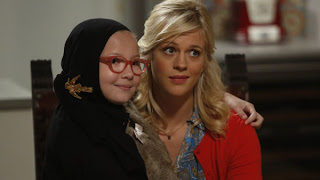 Shania is a very bright, very unique little girl. In the first episodes, she spent a lot of time cosplaying a character from the film Grey Gardens, which only endeared her all the more to Bryan. I found it wearing after a while, but that seems to have passed, luckily. She's more open-minded and wise than her very bigoted, very offensive great-grandmother.

Now here is what I consider to be the bit of a fly in this ointment. Nana. Although I have hopes that this is changing, her character is filled with far too many slurs and epitaphs for my comfort level, and far more than I feel the show  needs. We get the idea. Really. These are terms that would not be tolerated anywhere else, and using them for the sake of a laugh is... well, uncomfortable.  Her character, thus far, is one-dimensional - and a horrid dimension at that. However, having said that, I'm hoping that there will be growth and the slurs will decrease in both intensity and number. In the third episode, which involved buying baby clothes, she actually shared a moment with Bryan, when they both quoted, "With six you get eggroll." If this character growth doesn't occur, I have to say that the show will be doomed to not be taken seriously, and will also insult a great many people.

My other reservation about The New Normal goes back to the Glee creators, whose touch I can see in the very feel of the show, as well as its use of music. It's a comedy, yes, I know that, but even so, there are comedies and there are comedies. Don't aim for the broad laughs, the wide brush that you use for Glee. Go for subtlety, nuance, and yes... normalcy. Sometimes the dialogue is too glaringly obvious as to the point they want to make. Don't make the mistake of assuming your audience are idiots. Trust me, the idiots aren't watching this show and probably never will.

Know your audience, and entertain them. 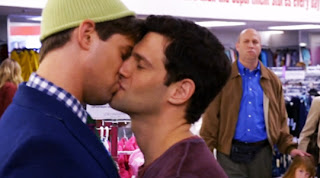 I'm not saying it can't be realistic, and that there aren't people who feel this way, because obviously there are. In the last episode, when the boys kiss in a department store, they receive flak from a man who doesn't want his daughter "subjected" to the sight. Sadly, this is a common occurrence, one which will hopefully become a thing of the past as people learn how to open their minds. And the more bigoted generation dies out, slowly but surely, making way for a new, hopefully enlightened, generation. Ideas change; it's the nature of man. Remember, at one time we all thought the world was flat. We know better now. (Except for the members of the Flat Earth Society, but that's another story).

I say bravo to NBC for daring to bring us this show in the face of such societal pressures as the Mormon Church, who refuse to show it on their affiliate station in Salt Lake City. I say boo to all close-minded people who think they have the right to control what other people think or watch. Not your call! I'd like to see more shows like this, ones where the couple being gay is not even the focal point, but simply is what they are, know what I mean? Where having gay or bi-sexual or lesbian or transgendered characters will not be an oddball occurrence, but simply a new normal.

After all, the important message here is that love is love is love... Embrace it and pass it on.

Thanks NBC, you've earned my respect. Now, keep on working at it, you've got a real winner here.