One Piece 6: The Oath Review 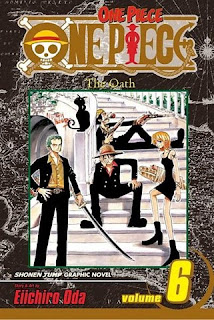 Sanji, sous chef and maitre d’ on the oceangoing restaurant Baratie, feeds a starving pirate, and Luffy is even more convinced that Sanji is the man for him. He invites him to join his pirate crew, but Sanji declines, although Luffy declines his declination and insists that the chef has to join them! The just-fed pirate declares himself to be a member of the pirate Krieg’s crew and, on hearing of Luffy’s plans, he warns them to stay away from the Grand Line!

It’s back to work for Chore Boy, as it has been determined that Luffy must serve on the Baratie for one year to pay what he owes. Although he seems to be adding to his debt with the number of dishes he’s broken already. Thinking to make himself useful, he tries to clean the wok, only to get a hot hand for his trouble and a scolding.

To his dismay, he finds Zolo, Nami, and Usopp sitting at a table, waiting to be served while he has to work! Life just isn’t fair, and how can they do this to him? Sanji arrives at their table and is instantly besotten with Nami. He gives her anything she wants, but all he gives the others is a hard time.

Meanwhile, pirate Gin has returned to Don Krieg’s ship, only to learn that it’s in deplorable condition—he offers to guide the wounded ship to the Baratie.

Sanji and the chef of the Baratie are arguing in the dining room, but this is something the diners come for, to see the battles that take place on the restaurant/ship. Sanji and Usopp aren’t exactly hitting if off either, but Nami is really being treated like a queen!

Two days later Don Krieg and his pirate crew reach the Baratie. Instantly he demands food for one hundred starving pirates. The cooks tell him no way, if they feed the pirates, then they’ll regain strength and seize their ship. Why should they want to do that? Despite that logic, Sanji heads to the kitchen to make those hundred meals.

“My job is to feed people, not judge them,” he says, and off he goes to cook.

When Don Krieg sees Chef Zeff, he recognizes him as “Red Shoe” Zeff, at one time a most formidable foe. Apparently Zeff has been to the Grand Line too, and Krieg wants the journal he kept of the experience.  Says Zeff, “I won’t give it to the likes of you.”

What happened at the Grand Line to produce such fear in the hearts of the pirates? And what will Luffy and his crew do when the same calamity that befell them makes its appearance at the Baratie? And hey, just where the heck did Nami go with the Merry Go and all the treasure?

Watching Luffy assemble his crew piece is piece is very entertaining, and the escapades aboard the Baratie are no exception to that rule. I like Sanji, and the new nemesis is already proving to be a worthy foe. The fun never stops with One Piece, and the action just keeps on going!

I like the artwork, and think it fits the characters and the story very well. Before each chapter, there are images of Buggy the Clown, for those who miss the colorful pirate.

This volume ends, as most of them do, with a cliffhanger. Can’t wait to see what the next one brings! I highly recommend this series for readers of all ages.