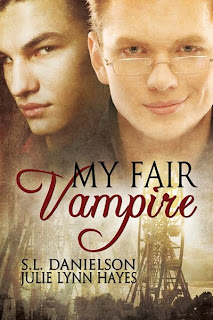 Good morning and welcome to Meet Me in St. Louis! Just kidding, of course. That movie took place a long time ago. During the World’s Fair, in fact. 1904. But that’s okay, as I’ve taken the Wayback Machine to just that time, in order to talk to two people—William Deming and Misha Rumiantseva. They’re the stars of the novel, My Fair Vampire, which releases October 8th from Silver Publishing. They’ve kindly consented to this interview with me.  We’re standing at the Fair even now, on the Pike, that mile long strip where the vendors are located. Goodness but it smells good.

Misha has his arm securely about William’s waist and he looks very protective of William. I think it’s sweet, personally. He stands just behind him, his head resting on William’s shoulder as they both regard me.
“Well, shall we begin, gentlemen?” I smile at them. “So, William, why don’t you tell me a little bit about yourself?” 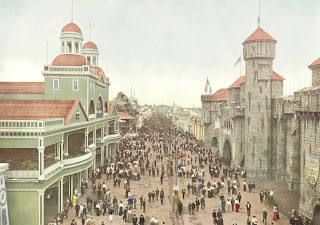 “Good morning to you! Not much to tell with me, a simple boy from a large family of ten. Strict father of  course. We lived in the mountains, in Moab, in the southern part of the state.  I went away to university to study journalism at Brigham Young and then got a job in Salt Lake City, at the Utah Gazette. When the Fair was first announced, I prayed that my editor might send me on such a delicious assignment. Thank the heavens he did, for I have Misha in my life now, and forever.”
Misha smiles at him, and they turn toward one another and exchange a kiss. Oh goodness, how I do love to see two people so very much in love!
“So you came to the Fair for your job and found love, how romantic! Misha, are you from around here, then?” His accent is foreign, but I can’t quite put my finger on what it is. 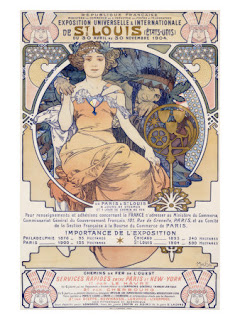 “Nyet,” he says, nuzzling gently at William’s neck. The blond blushes. Rather prettily, I must say. “I come from Russia. My aunt, she has a—how you say? A boarding house. She take in people. William come to stay, I meet him there.”
“Ah, a boarding house. There was a lot of that during the Fair, was there not?”
“Yes,” William replies. “The people fortunate enough to live in these magnificent houses took in boarders such as myself so we would be closer to the Fair.” I certainly chose the right one.” He kisses Misha again.  “The architecture is just splendid...all of these homes.”
“I’d certainly love to see them, if that’s possible. Maybe you two could give me a tour of the boarding house—“
William glances at Misha, who shakes his head regretfully.
“I’m afraid that won’t be possible, Mrs. Hayes, I’m sorry,” William apologizes.
“Not a problem.” I smile at them. I hadn’t really expected it. I’m really grateful that they’ve taken this much time out of their busy schedules as it is.  I quickly glance at my notes. “I see the boarding house is within walking distance. Do you come to the Fair often? What are your favorite sights?”
"I came to the Fair a few times to write my story,” William says, “and blessedly it was within walking distance. As for favorite attractions, I'd have to say the Ferris Wheel. I didn't get to have quite the look around I wanted, though, I had something far more appealing in the cage with me at the time.” He grins at Misha, who smiles back at him. I want to squee just looking at them. 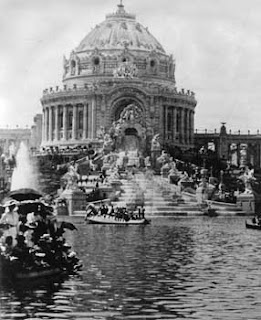 “I can imagine what, but surely you weren’t alone? I mean I read those cars hold up to like sixty people. How… that is…” I’m trying to be delicate here. “How frisky could you possibly get with witnesses?”
“Luckily the ride operator was kind enough to take a small donation to let us pass into the cage by ourselves. Splendid man.”
I sigh. How romantic is that? Alone on the huge Ferris Wheel? “I understand there are many different kinds of food to be found at the Fair, some of them never seen before, as well as food from all around the world? Did you have any favorite foods?”
Misha makes a sound which almost seems to be a snort. “I did not eat… food at the Fair,” he says. I love his accent, it’s really hot. I look at William inquisitively.
“I must admit, of all the offerings which I was fortunate to be able to sample, I liked the hamburger the most. So delicious and so easy to hold! Though the waffle cones were very good, too. Such innovation!” He waxes enthusiastic, and I can understand why. The invention of the hamburger and the ice cream cone were important landmarks in American cuisine!
“Oh, before I forget, wasn’t there some sort of trouble at the Fair? Someone was killed, isn’t that true?”
Misha and William exchange glances.
“We must go,” Misha says abruptly. He takes a step backward, pulling William with him.
“Oh, really? Right now?” I cannot seem to hide my disappointment. I’d barely started with my questions on the murder. Why did they feel the need to leave right now?
"We must go...thank you for your time,” William says.
Misha smiles and suddenly I see—But no, I must be mistaken. I have an overactive imagination, I tell myself with a laugh, even as the two young men melt into the crowd around us.
Everyone knows there’s no such thing as vampires. Right?
Well, that’s it for me. I think I’ll walk around the Fair for a little bit, but I’ll be back!
Until next time, take care!